Home > Press release: Team of the University of Jena ...

Team of the University of Jena researches racism, sexism and anti-semitism in works of classical German philosophy

Within the framework of the Koselleck Programme of the German Research Foundation (DFG), the project "How to Deal with Racism, Sexism and Anti-Semitism in Works of Classical German Philosophy. A Critical and Self-critical History of Philosophy as a ‘Public Philosophy’ Project" is funded with one million euros. The research project by Prof. Andrea Esser, head of the Department of Practical Philosophy at Friedrich Schiller University Jena, starts this month.

The anti-racist protests of the Black Lives Matter movement, as well as the reactions to the racist and anti-Semitic attacks in Halle and Hanau, have also sparked discussion within German-language philosophy. Academics have initiated discussion series on the role of their own discipline in the history of European violence, and conducted debates in daily newspapers, asking: Was Kant a racist? Is Hegel’s thinking anti-Semitic? Were the German idealists consistently sexist?

Whether these questions are actually suitable for creating awareness of the problematic legacy that continues to affect society and politics today is doubtful, in the opinion of Prof. Andrea Esser, head of the Department of Practical Philosophy at Friedrich Schiller University Jena, Germany. She received the positive decision on funding within the framework of the Koselleck Programme of the German Research Foundation (DFG), for a project that aims to encourage philosophy to deal with its problematic legacy both in terms of the historiography of philosophy and from the perspective of its effect on and in the present. The DFG is funding the project “How to Deal with Racism, Sexism and Anti-Semitism in Works of Classical German Philosophy. A Critical and Self-critical History of Philosophy as a ‘Public Philosophy’ Project” for a period of five years. The project starts this August, with funding of one million euros.

“With all the philosophers that we want to consider more closely, there is de facto an initial suspicion,” says Prof. Esser. She emphasises, however, that the whole project is not conceived as a court case, because it is not primarily about the individuals and even less about imposing bans on reading or even thinking. Rather, Andrea Esser and her team want to reconstruct the history of the entanglement of exemplary texts in racist, sexist and anti-Semitic thought patterns. This involves going into both the conception of the texts and their reception. For example, the way certain text passages were used and the authority of their authors will be considered in the context of ideologies, such as the ideology of National Socialism, that specifically sought to spread and consolidate racism and anti-Semitism. “Our goal is to make such thought and language patterns visible, and also to show that they can still have an impact, and the way in which they do that,” says Prof. Esser. For this reason, the critical examination of the history of philosophy must of course also include a critical examination of one’s own current positions. Because the fact that racist, anti-Semitic and sexist learning is still in evidence today, and that philosophical debates sometimes even reproduce it, is still played down, despite current media interest in the topic.

The project focuses on Immanuel Kant and philosophers after Kant, but the local connection should also be clearly recognisable. Therefore, the German Idealists J.G. Fichte, G.W.F. Hegel and F.W.J. Schelling, who all taught in Jena for a time, will also be addressed, together with J.F. Fries, G. Frege, B. Bauch and W. Wundt.

“Some of these philosophers continue to shape the self-perception of the Institute of Philosophy in Jena today,” says Prof. Esser. These philosophers are also remembered in the city and they are still important for Jena’s self-image.

Intensive dialogue with actors and activists outside the University

The critical and self-critical examination of racism, anti-Semitism and sexism in philosophy is given a particularly innovative twist by systematically opening out towards a “public philosophy”. “From the outset, the team has sought an intensive dialogue with activists, civil-society initiatives and other actors from the city. This is because the starting point of the discussion lies precisely in the public negotiations on the legitimisation of racist, anti-Semitic and sexist theories and practices through philosophy, but also in the potential of philosophy to expose and criticise them,” says Prof. Esser. It is not a matter of thinking primarily in categories of “right” or “wrong” or of asking whether certain individuals must henceforth be labelled “racist”, etc. Instead, the project wants to use an intensive dialogue with the public, institutions and activists to overcome such problematic polarisations and develop a concept of public philosophy based on a conception of political judgement for social questions of philosophy. The “tools” developed in this process for critically examining the history of one’s own discipline should ideally find their way into curricula and teaching concepts for schools and universities.

<
Schelling, Hegel, Fichte (from left) and other philosophers are put to the test in the new research ...
Photo: Jan-Peter Kasper
University of Jena

<
Schelling, Hegel, Fichte (from left) and other philosophers are put to the test in the new research ...
Photo: Jan-Peter Kasper
University of Jena

Schelling, Hegel, Fichte (from left) and other philosophers are put to the test in the new research project “How to Deal with Racism, Sexism and Anti-Semitism in Works of Classical German Philosophy” at Friedrich Schiller University Jena. 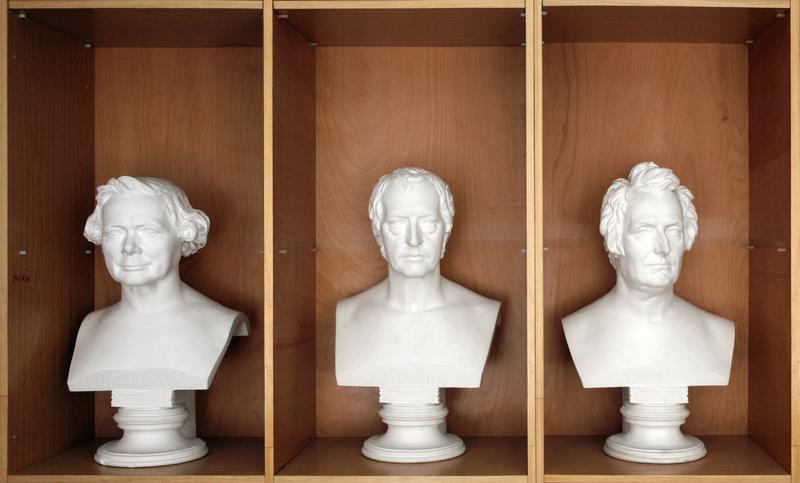