Finding active agents against SARS-CoV-2 and other coronaviruses—this goal has been pursued by DZIF scientist Prof Thomas Schulz and his team at Hannover Medical School (MHH) since the virus first appeared. The research, conducted in collaboration with the team of DZIF scientist Prof John Ziebuhr at Justus Liebig University Giessen, has now been awarded a grant over approximately 440,000 Euros by DZIF.

In previous research, the team of scientists had succeeded in identifying 300 substances—from a collection of around 60,000 small-molecule compounds—that are able to inhibit the human coronavirus HCoV-229E, a less harmful relative of SARS-CoV-2. The team conducted the work in collaboration with Prof Thomas Pietschmann's team at TWINCORE – Center for Experimental and Clinical Infection Research, a joint facility of the MHH and the Helmholtz Centre for Infection Research (HZI) and a member institution of the DZIF. So far, eight of these substances have been shown to effectively inhibit also SARS-CoV-2.

A special path towards the goal

Now, the researchers aim to explore where and, in particular, how the best five of these promising molecules act. "We are investigating what exactly their target structure is—i.e., whether the molecules act in the virus or in the cell—and what they change in the structures,” explains Dr Amelie Wachs from Prof Schulz's research group. “For example, we want to find out if the substances inhibit a viral enzyme or if they change structures that are essential for coronavirus replication," she says.

"By possibly identifying new target structures, we hope to learn previously unknown details about the virus. Building on this knowledge—and after further optimisation of the substances—new effective drugs could be created," adds her colleague, Talia Schneider.

The research group's approach differs from that of many other teams, which are looking for substances able to bind to and inhibit already known target structures of SARS-CoV-2. Using compounds that are already approved as drugs, or compounds, for which extensive safety data regarding their use in humans is already available, has the advantage that results can be applied relatively quickly in the clinic. However, this route is less productive in terms of new insights into SARS-CoV-2 and other coronaviruses. In contrast, the approach of the project now funded by the DZIF to screen previously uncharacterised compounds and subsequently identify their targets offers a host of new possibilities: The identification of not only previously unknown compounds but possibly also previously unknown targets, which might enable new tools to act against several different coronaviruses.

The research is particularly important for elderly and immunocompromised people, as they are at increased risk of severe COVID-19. These people are also the focus of the RESIST (short for: Resolving Infection Susceptibility) cluster of excellence, of which Prof Schulz is the spokesperson.

RESIST—Research to help the most vulnerable

In the RESIST Cluster of Excellence, more than 50 teams are working together to ensure that people, who are particularly susceptible, can be better protected against infections. Led by the MHH, RESIST includes clinicians, who are very familiar with patients' situations, as well as basic scientists, who study pathogens and their interaction with the immune system down to the smallest detail. RESIST consists of six partner institutions and is funded by the German Research Foundation (DFG). 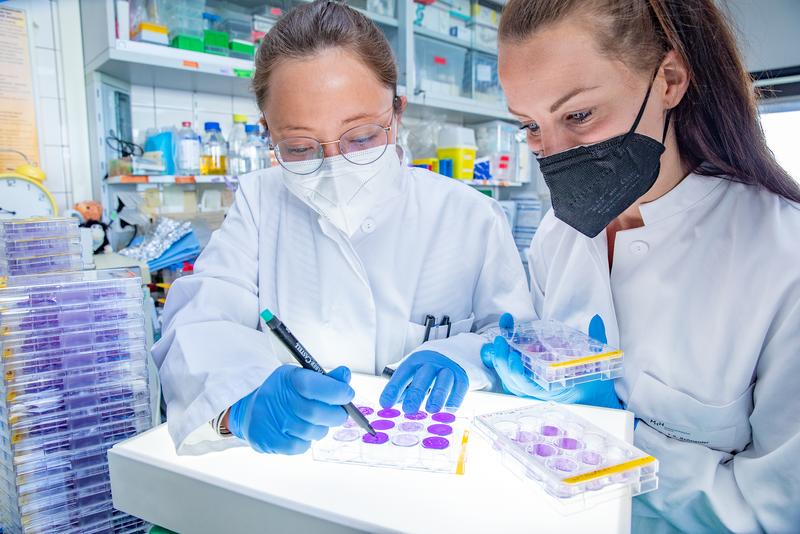