Fish to help in search for MS drugs

The zebrafish serves as a model organism for researchers around the world: it can be used to study important physiological processes that also take place in a similar form in the human body. It is therefore routinely used in the search for possible active substances against diseases. Researchers at the University of Bonn have now described an innovative way to do this. In this process, the larvae fish are made a bit more "human-like". This humanization could make the search for active pharmaceutical substances much more efficient. The results of the pilot study have been published in the journal Cell Chemical Biology.

The zebrafish should be known to many aquarium enthusiasts mainly because of its striking pigmentation. However, the characteristic black-blue stripes, to which the animal owes its name, only form over time. Its eyelash-sized larvae, on the other hand, are still more or less transparent. Many developmental processes in their bodies can therefore be observed under the light microscope. For this reason, they now serve as a model organism for research groups around the globe.

"At the University of Bonn, for example, we are investigating how zebrafish repair defective nerve tissue," explains Prof. Dr. Benjamin Odermatt from the Institute of Anatomy at the University Hospital Bonn. "We are also interested in this because many genes involved in this process also exist in a similar form in humans." In principle, agents that boost these repair genes in fish could thus also work in humans. However, the differences between the genetic makeup of fish and humans are often significant. The larvae are therefore sometimes of limited use in the search for new drugs.

"We therefore took a different approach," explains Prof. Dr. Evi Kostenis from the Institute of Pharmaceutical Biology at the University of Bonn. " For a human gene known to play a role in the repair of nerve cells we looked for its counterpart in zebrafish. Then we excised this counterpart in the fish and replaced it with the human version." The new genetic material took over the function of the original zebrafish gene. "If we now find a substance that boosts the repair processes in the fish with the human gene, there is a good chance that this will also be the case in humans," says the scientist, who is also a member of the Transdisciplinary Research Area "Life and Health" at the University of Bonn.

The researchers demonstrated that this replacement works in their pilot study on the so-called GPR17 receptor. In humans, its overactivation can lead to diseases such as multiple sclerosis (MS). Nerve cells communicate by means of electrical signals. Their extensions are surrounded by a kind of insulating layer, a lipid-like substance called myelin. It prevents short circuits and also significantly speeds up the transmission of stimuli. This protective sheath is produced by specialized cells named oligodendrocytes. These resemble a microscopic octopus: many long arms extend from their cell body, most of which consist of myelin. Like an insulating tape, these wrap themselves around the nerve cell processes during brain development. Normally, the protective layer lasts a lifetime.

In multiple sclerosis, however, the body's own immune system destroys the myelin layer. This results in neurological disorders, for example in speech, vision or walking. But normally there is a supply of immature oligodendrocytes in the brain for repair work. When damage occurs, they mature and patch up the hole. In multiple sclerosis, this mechanism is disrupted - many of the cellular insulating tape donor cells remain in their immature state. The GPR17 receptor seems to bear the main blame for this: if it is activated by a molecular signal, it slows down the maturation of the oligodendrocytes.

"Zebrafish also have a GPR17 receptor," explains Dr. Jesus Gomeza, who led the study with Kostenis and Odermatt. "And there it also regulates how many oligodendrocytes mature." The researchers now replaced part of the receptor gene with its human counterpart - namely, the very structure responsible for receiving molecular signals. "We were able to show that this new mosaic gene functions normally in the fish larvae," says Gomeza. A molecule that inhibits the human GPR17 receptor in the test tube also cranked up the formation of mature oligodendrocytes in the modified fish.

In the search for new active ingredients, substances are first tested in cell cultures. Only individual, very promising candidates are then tested in mice or other animal models. But even if they work there, tests in humans still often end soberingly. "Humanized zebrafish larvae allow many substances to be screened quickly, and with a high chance of success, since the target genes originate from humans," explains Benjamin Odermatt. "From our point of view, this is a very promising avenue for drug development."

Funding:
The study was financially supported by the German Research Foundation (DFG). 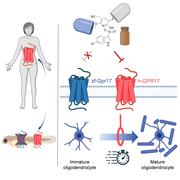 Zebrafish and humans both have a GPR17 receptor. In the study, the fish receptor was replaced by its human counterpart. This makes it more likely to find pharmacologically active substances. 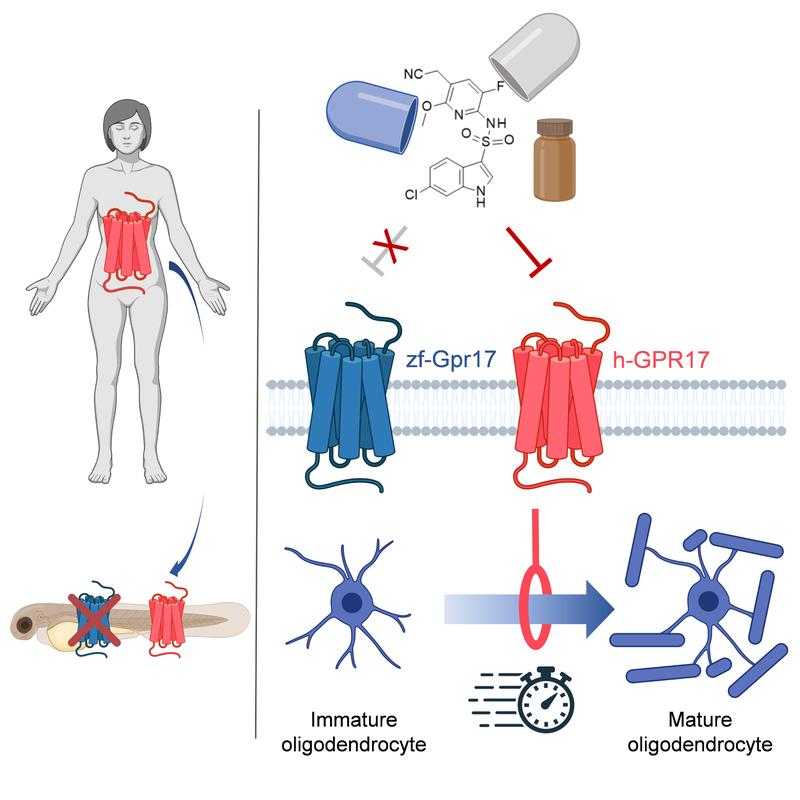