Three awards in one sweep: the creators of the mobile game app “Kitty Q” and its follow-up project “QUANTube” from the Würzburg-Dresden Cluster of Excellence ct.qmat had every reason to be excited this Wednesday, Sept. 21. Taking part in two parallel award ceremonies in Leipzig and Berlin, they took home a total of three awards for outstanding science communication and creative science marketing.

The mobile game “Kitty Q – A Quantum Adventure” developed by the Würzburg-Dresden Cluster of Excellence ct.qmat – Complexity and Topology in Quantum Matter received the “Let’s get digital” award of the German Federal Association of Communication Professionals in Higher Education (Bundesverband Hochschulkommunikation) on Wednesday, Sept. 21. Prof. Matthias Vojta, speaker of the Dresden branch of the Cluster of Excellence, accepted the award at the Paulinum at the University of Leipzig. At the same time, two further official award ceremonies were conducted in Berlin: one for the “Ideas Competition for International Research Marketing” and another for the “Community Prize”, both projects funded by the German Research Foundation (Deutsche Forschungsgemeinschaft – DFG). The speaker of the Würzburg branch of the Cluster of Excellence Prof. Ralph Claessen, the president of the Technische Universität Dresden Prof. Ursula Staudinger, the president of the Julius-Maximilians-Universität Würzburg Prof. Paul Pauli, as well as the entire project team travelled to attend the event in person.

“The Kitty Q app is about to turn one year old, so these prizes feel like birthday presents to us,” comments the Dresden cluster speaker Vojta. The mobile phone game with its cute, half dead protagonist Kitty Q was published worldwide in October 2021 in the Apple App and the Google Play Stores, in both a German and an English language version. The app was developed by the Cluster of Excellence ct.qmat in partnership with the award-winning app designer Philipp Stollenmayer. The goal: to foster the interest of children and teenagers ages 11 and up for quantum physics through play. This concept proved highly successful, as demonstrated by the more than 150,000 worldwide downloads and numerous other accolades. Amongst them are the first place in the category “Digital” at the German Children's Media Festival “Goldener Spatz”, the title of “Best Mobile Indie Game” at the Valencia Indie Summit, and a spot amongst an international jury’s top 10 European games at the Google Play Indie Games Festival.

The “Let’s get digital” award for science communication

The “Let’s get digital” award came into being in 2021 by the German Federal Association of Communication Professionals in Higher Education with the aim of honoring outstanding digital projects in the field of science communication that were created during the Corona pandemic. “We were won over by almost everything that this project stands for … New ideas, diversity, and most of all, highlighting the relevance of investing into the digital communication of universities. In addition, we all loved playing through the game,” reads the jury’s statement.

“The app has already won multiple prizes for its storyline and the game design. The fact that we are now receiving this award for what we originally set out to do, i.e., to heighten the visibility of quantum physics for the broader public and to ‘translate’ our research to make it more accessible, is something that makes us particularly happy,” comments Prof. Vojta. According to him, it was not an easy undertaking to present the complex research in a way that children and young adults would understand. It was worth it, though, and the scientists, too, learned a great deal along the way. The goal of the gaming app was to turn physics in general and quantum physics in particular into something cool and highly fun that the players could experience while furthering their knowledge at the same time. The app allows them to enter a visually appealing quantum world with its own set of peculiar laws where more than 20 exciting riddles all based on real quantum phenomena are waiting to be solved. Additional background information tailored to the target audience is also available, for example on Albert Einstein, Schrödinger’s cat, or Heisenberg’s uncertainty principle.

Awards for research marketing in Berlin

“The fact that we are attending two award ceremonies today is an unbelievable coincidence and yet it fits in so neatly with the strange phenomena taking place in the quantum world. After all, Schrödinger’s cat, famous beyond the field of physics, can also be found in two different states at once,” explains Prof. Claessen. The thought experiment of the cat in the box that is simultaneously dead and alive was formulated by Erwin Schroedinger in 1935 and became a popular symbol for a principle of quantum mechanics known as superposition: a feature by which objects are able to exist in two separate and incompatible states at the same time.

Additional information on the award for International Research Marketing for the mobile game “Kitty Q”: https://www.ctqmat.de/de/news/2021-03-19-ganz-verspielt-deutsche-forschungs-geme...

Additional information on the Community Prize for “QUANTube”, the follow-up project to “Kitty Q”: https://www.ctqmat.de/de/news/2021-12-21-quantenphysik-einfach-erklaert-preisgek...

Additional Sources:
Please visit https://www.kamibox.de/katzeQ-media for additional photo, video and text material. All material may be freely used for press coverage of the mobile app “Kitty Q,” provided the copyright owner is credited. Download and find additional information on the app at https://katzeq.app.

“Kitty Q – A Quantum Adventure” app
The award-winning mobile game “Kitty Q” was developed to familiarize children and teenagers ages 11 and up, and girls especially, with future study options in the fields of science, technology, engineering and mathematics (STEM). Physics in particular is one of the subjects with an especially low proportion of women. With “Kitty Q,” the ct.qmat research alliance between the Julius-Maximilians-Universität Würzburg and Technische Universität Dresden takes an unusual approach to recruiting young talent because it addresses a very young target group. The game has been available for download in the Apple App Store and Google Play Store since fall 2021, and has been downloaded 150,000 times to this day.

Cluster of Excellence ct.qmat
The Cluster of Excellence ct.qmat – Complexity and Topology in Quantum Matter is a joint research collaboration by the Julius-Maximilians-Universität Würzburg and Technische Universität Dresden established in 2019. Close to 300 scientists from more than 30 countries and four continents carry out research on topological quantum materials that reveal surprising phenomena under extreme conditions such as ultra-low temperatures, high pressures, or strong magnetic fields. The Cluster of Excellence is funded by the Excellence Strategy of the federal and state governments and is the only cluster in Germany that traverses federal state lines.

In the background, from left to right, Prof. Ralph Claessen, Prof. Ursula Staudinger, Prof. Paul Pauli and the entire Kitty Q team are delighted with the awards. 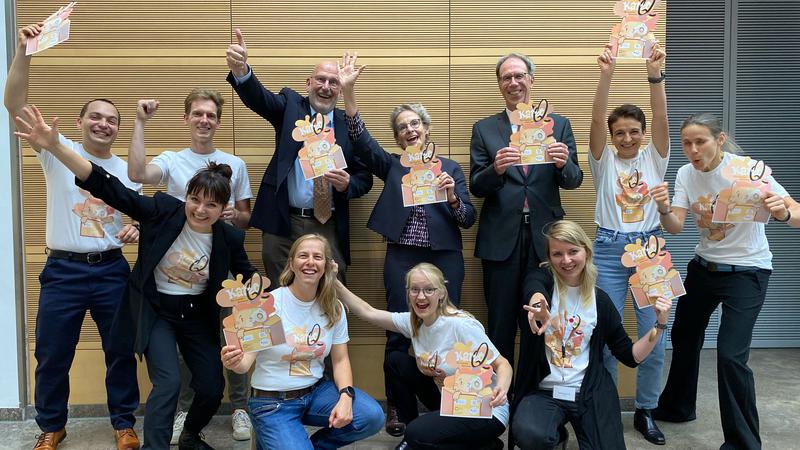