Electrons in the Fast Lane

(Rostock, January 25, 2023) By using ultrafast laser flashes, scientists at the University of Rostock in collaboration with researchers of the Max Planck Institute for Solid State Research in Stuttgart have generated and measured the shortest electron pulse to date. The electron pulse was created by using lasers to remove electrons from a tiny metal tip and lasted only 53 attoseconds, that is, 53 billionths of a billionth of a second. This study is setting a new speed record in man-made control of electric currents in solid materials.

The research opens new avenues for advancing the performance of electronics and information technologies, as well as for developing new scientific methodologies for visualizing phenomena in the microcosm at ultimate speeds.

Ever wondered what makes your computer and your other electronic gadgets slow or fast in their performance? It is the time it takes electrons, some of the tiniest particles of our microcosm, to stream out from minute leads inside the transistors of electronic microchips and to form pulses. Methods to speed up this process are central for advancing electronics and their applications to ultimate performance limits. But what is the shortest possible streaming time of electrons from a tinny metal lead in an electronic circuit?

By using extreme short laser flashes, a team of researchers led by Professor Eleftherios Goulielmakis, head of the group Extreme Photonics of the institute for Physics at the University of Rostock, and collaborators at the Max Planck Institute of Solid State Research in Stuttgart used state-of-the art laser pulses to eject electrons from a tungsten nanotip and to generate the shortest electron burst to date. This work is published in Nature (25 January 2023, DOI: https://www.nature.com/articles/s41586-022-05577-1).

Whereas it has long been known that light can release electrons from metals—Einstein was the first to explain how—the process is extremely hard to manipulate. The electric field of light changes its direction about a million billion times per second making it challenging to control the way it rips off electrons from the surface of metals.

To overcome this challenge, the Rostock scientists and their co-workers used a modern technology that was earlier developed in their group—light field synthesis—which allowed them to shorten a light flash to less than a full swing of its own field. In turn, they used these flashes to illuminate the tip of a tungsten needle to knock electrons free into vacuum.

“Using light pulses that comprise merely a single cycle of its field, it is now possible to give electrons a precisely controlled kick to set them free from the tungsten tip within a very short time interval” explains Eleftherios Goulielmakis, head of the research group.

But the challenge could not be overcome unless the scientists also found a way to measure the brevity of these electron bursts. To deal with this hurdle, the team developed a new type of camera that can take snapshots of the electrons during the short time the laser is pushing them out from the nanotip and into the vacuum.

”The trick was to use a second, very weak, light flash” said Dr. Hee-Yong Kim, the leading author of the new study. “This second laser flash can gently perturb the energy of the electron burst to find out how it looks like in time”, he adds. “It is like the game ‘What’s in the box?’ where players try to identify an object without looking at it. but just by turning it around to feel its shape with their hands”, he continues.

But how could this technology be used in electronics? “As technology advances rapidly, it is reasonable to expect the development of microscopic electronic circuits in which electrons travel in a vacuum space among closely packed leads to prevent obstacles that slow them down”, says Goulielmakis. “Using light to eject electrons and drive them among these leads could speed up future electronics by several thousand times of today’s performance”, he further explains.

But the researchers believe that their newly developed methodology will be used directly for scientific purposes. “Ejecting electrons from a metal within a fraction of a light’s field cycle dramatically simplifies the experiments and allows us to use advanced theoretical methods to understand the emission of electrons in ways that were not previously possible” says Professor Thomas Fennel, a coauthor in the new publication.

“Since our electrons bursts provide excellent resolution for taking snapshots of electronic and atomic motions in materials, we plan to use them to acquire a deep understanding of complex materials to facilitate their applications in technology,” Goulielmakis concludes. 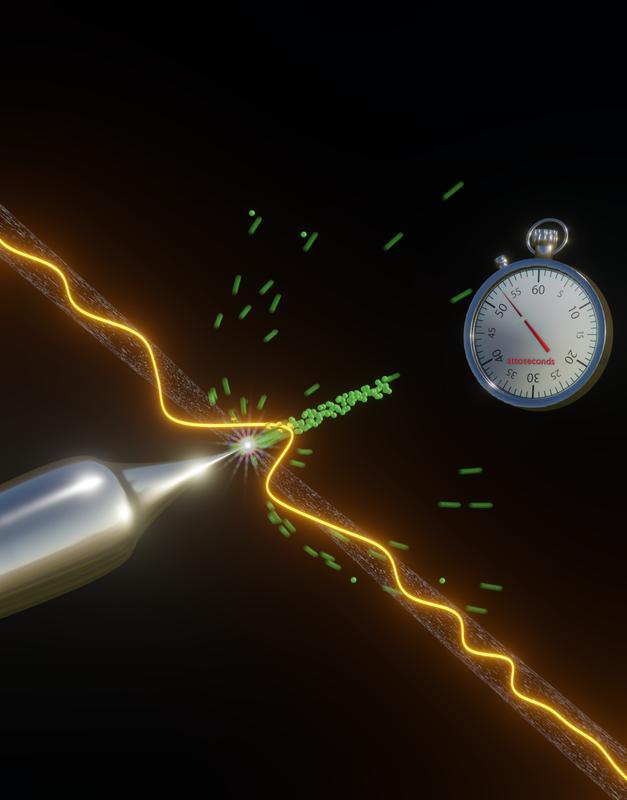