Home > Press release: Nine new and exotic creatures for the ...

Nine new and exotic creatures for the pulsar zoo

Nine millisecond pulsars, most of them in rare and sometimes unusual binary systems: that is the first result of a targeted survey with MeerKAT in South Africa. An international team with significant contributions from AEI (Hannover) und MPIfR (Bonn) selected 79 unidentified pulsar-like sources from observations of NASA’s Fermi Gamma-ray Space Telescope and observed them at radio frequencies with MeerKAT. Using this tried-and-tested method with a next-generation telescope array has significant advantages over previous surveys. The team discovered nine rapidly rotating neutron stars, most of them with unusual properties.

“Our TRAPUM survey used MeerKAT, a relatively new and superbly sensitive radio telescope, together with dedicated analysis software to observe a selection of very promising pulsar-like sources,” says Colin Clark, group leader at the Max Planck Institute for Gravitational Physics (Albert Einstein Institute; AEI) in Hannover and lead author of the study. “The reward for our efforts is something we can be proud of: we discovered nine new millisecond pulsars, some of which are quite unusual.”

The team used a tried-and-tested approach to discover new millisecond pulsars. The Fermi Large Area Telescope catalog compiles gamma-ray sources from eight years of observations with NASA’s Fermi Gamma-ray Space Telescope. This catalog contains information about the sources’ sky positions, energies of their gamma rays, and variations of their gamma-ray brightness over time. “We used machine-learning methods to determine pulsar-likeliness for all Fermi catalog sources unassociated with known celestial objects,” explains Clark. “After we had identified the most pulsar-like sources in the Fermi catalog, we whittled down our target list to those sources which would most likely be detectable by our survey. We observed 79 sources with MeerKAT.”

MeerKAT is an array of 64 dish antennas, each with an effective diameter of 13.5 meters in the Karoo, South Africa. MeerKAT provides unprecedented sensitivity to sources in the southern celestial hemisphere, with an ability to detect sources that are around five times fainter than any that can be found with the next most powerful southern hemisphere telescope.

The TRansients and Pulsars using MeerKAT (TRAPUM) Large Survey Project uses this sensitivity to search for new pulsars in the parts of the sky where they are most likely to be found: globular clusters, nearby galaxies, supernova remnants and – in this case – unidentified gamma-ray sources. Doing so required the development of dedicated computing hardware that combines the data from the MeerKAT antennas into one virtual large radio telescope that can simultaneously observe almost 500 closely spaced sky positions.

This TRAPUM survey of Fermi sources exploited the extra sensitivity provided by MeerKAT to reduce observation times to just 10 minutes, much shorter than the hour-long observations previously required to find pulsars in these sources.

Short observations have many advantages: More sources can be targeted in limited observing time. Sources can be observed repeatedly, which increases the chance of observing a new radio pulsar because they may not be detectable during the first survey pass. The TRAPUM pulsar survey made two observations of each source. Analyzing short observations is computationally less demanding than analyzing longer observations. Finally, orbital motion in binary systems can make radio pulsars more difficult to detect. During the short observing times, the pulsar’s motion is almost constant, and therefore the detrimental effect of changing orbital motion is mitigated.

In addition to sheer sensitivity, the MeerKAT array offers one extra advantage over other single-dish telescopes. Its 8-kilometer footprint allows it to pinpoint the location of new sources with very high precision, enabling rapid follow-up studies at other wavelengths.
Nine new millisecond pulsars

Searching for pulsars in large amount of data obtained during TRAPUM observations requires lots of computing power, and a quick turnaround to free up storage space for further observations.

“We ran purpose-built data analysis pipelines on 120 graphics processing units (GPUs) in a dedicated computing cluster to sift through our MeerKAT survey observations. We quickly found nine millisecond pulsar candidates, and confirmed all of them by additional MeerKAT observations,” says Ewan Barr, group leader at the Max Planck Institute for Radio Astronomy, and TRAPUM Project Scientist. “It is great that we could also use the confirmation observations to refine the sky positions with MeerKAT’s capability to sample the sky in a dense grid. This is invaluable for follow-up studies at different wavelengths.”

One of the discoveries, called PSR J1526−2744, was closely studied afterwards. Following the detection of this radio pulsar in a binary system, the researchers also picked up the neutron star’s gamma-ray pulsations. Using all available Fermi data, they could precisely study the orbital motion and determine the binary system’s properties. Most likely, the neutron star orbits the common center of mass with a light-weight white dwarf in a little less than five hours. This would make it the pulsar–white-dwarf binary system with the second shortest orbital period.

The team also searched for continuous gravitational waves from PSR J1526−2744. If the neutron star was deformed, it would emit gravitational waves at twice its rotational frequency. The researchers used all of the publicly available Advanced LIGO data from the O1, O2, and O3 runs. Because they exactly knew the pulsar’s motion in the binary system from the gamma-ray observations, the research team achieved the maximum possible search sensitivity for gravitational waves.

Even though the team observed no continuous gravitational waves from PSR J1526−2744, they could measure how much the neutron star deviates from perfect axisymmetry. “We now know that PSR J1526−2744 is very symmetric indeed. We showed that the neutron star’s equator cannot deviate from a perfect circle by much more than the width of a human hair,” says Anjana Ashok, a PhD student in the permanent independent Max Planck Research Group “Continuous Gravitational Waves” at the AEI Hannover who led the gravitational-wave search.

Another two pulsars, called PSR J1036–4353 and PSR J1803−6707, are typical “redback” pulsar systems consisting of neutron stars with companion stars of at least a quarter the mass of our Sun. These pulsars evaporate and destroy their companions over time, hence the reference to their spidery namesake, Australian redback spiders whose females consume the males after mating.

After rapidly and precisely pinpointing the pulsar positions with MeerKAT’s unique capabilitites, the astronomers identified their companions in the Gaia astrometry mission’s star catalogue, and studied them with dedicated optical observations using the ULTRACAM camera on ESO’s New Technology Telescope. Additionally, they found X-rays from PSR J1803–6707 in data from the first eROSITA all-sky survey. The X-rays likely stem from the energetic pulsar wind slamming into material evaporated from the companion and are characteristic for redback systems.

Pulsars lurking in the catalog

It is difficult to make a reliably estimate the number of yet undetected pulsars lurking in unassociated pulsar-like Fermi sources. Nonetheless, the astronomers are certain that future observations can discover several more millisecond pulsars. In the target list, there are several candidates that are very likely pulsars. However, several surveys so far have not found radio-wave or gamma-ray pulsations. New telescopes, analysis methods and repeated observation attempts may one day reveal their pulsar nature. With more Fermi observation time the underlying source catalogue will grow and additional pulsar-like sources will appear and become potential targets.

“Our results, which are only the first from TRAPUM’s survey of Fermi sources, already show the great potential of MeerKAT. With MeerKAT and dedicated software, we’re not only able discover, but also to rapidly and precisely localise new millisecond pulsars,” says Clark. “MeerKAT observations greatly help with multi-wavelength follow-ups, catalogue searches, and future observations, or in other words with making millisecond pulsars gifts that keep on giving.”

Operated by the South African Radio Astronomy Observatory (SARAO), MeerKAT is the largest radio telescope in the Southern hemisphere and one of two precursor instruments of the SKA Project based in South Africa. Located in the Karoo desert, the radio telescope will soon be expanded with an additional number of dishes, becoming “MeerKAT+”. This will later be gradually integrated into SKAO's Mid telescope, whose construction has already begun and will continue until 2028. The first scientific observations of MeerKAT+ could begin as early as 2023, during the testing phases of the telescope.

Fermi LAT image with bright, diffuse glow from the central plane of the Milky Way (map centre) and active galaxies as point-like sources. Many of the bright sources along the plane are pulsars. 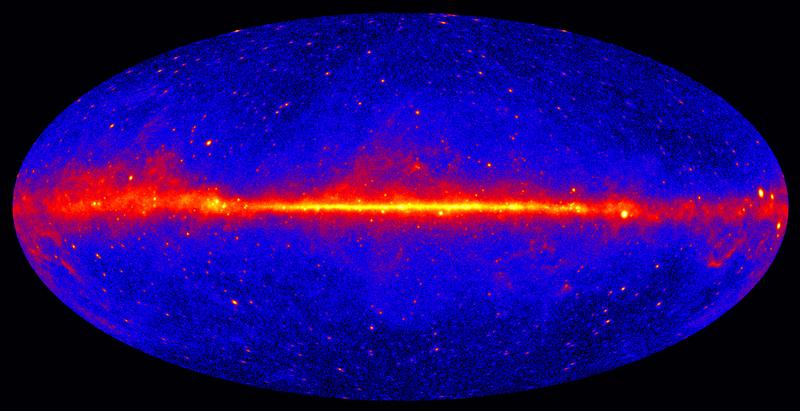