Home > Press release: The Economics of Ecosystems and ...

The Economics of Ecosystems and Biodiversity- TEEB

At CBD COP 9 today, 29th May, a report setting out a "comprehensive and compelling economic case for the conservation of biodiversity" was presented by the report's author Mr. Pavan Sukhdev. The work was launched in 2007 by Minister Sigmar Gabriel of Germany and Stavros Dimas the Commissioner responsible for Environment in the European Commission, to promote a better understanding of the true economic value of the benefits we receive from nature. The report presented today is the interim report of the work which will continue in 2009 and 2010.
Mr Sukhdev, a senior figure in Deutsche Bank, said that the interim report showed "we are trying to navigate uncharted and turbulent waters with an old and defective economic compass and that this was affecting our ability to forge a sustainable economy in harmony with nature."

What is the Issue?
Nature provides human society with a vast diversity of benefits such as food, fibres fuel, clean water, healthy soil, protection from floods, protection from soil erosion, medicines, storing carbon (important in the fight against climate change) and many more. Though our wellbeing is totally dependent upon these "ecosystem services" they are predominantly public goods with no markets and no prices, so they often are not detected by our current economic compass. As a result, due to the pressures coming from population growth, changing diets, urbanisation and also climate change, biodiversity is declining, our ecosystems are being continuously degraded and we, in turn, are suffering the consequences.

What is Happening to Our Biodiversity and Ecosystems?
The report presented today shows that if we do not adopt the right policies, the current decline in biodiversity and the related loss of ecosystem services will continue and in some cases even accelerate. Some ecosystems are likely to be damaged beyond repair. With a "business as usual" scenario, by 2050 we will be faced with serious consequences:
o 11% of the natural areas remaining in 2000 could be lost, chiefly as a result of conversion for agriculture, the expansion of infrastructure, and climate change
o almost 40% of the land currently under low-impact forms of agriculture could be converted to intensive agricultural use, with further biodiversity losses
o 60% of coral reefs could be lost - even by 2030 - through fishing, pollution, diseases, invasive alien species, and coral bleaching due to climate change.

Current trends on land and in the oceans demonstrate the severe dangers that biodiversity loss poses to human health and welfare. Climate change is exacerbating this problem. And again, as with climate change, it is the world's poor who are most at risk from the continuing loss of biodiversity. They are the ones most reliant on the ecosystem services which are being undermined by flawed economic analysis and policy mistakes.

Biodiversity Protection and Questions of Equity and Ethics
Poverty and the loss of biodiversity are inextricably linked: the real beneficiaries of many of the services of ecosystems and biodiversity are predominantly the poor. The livelihoods most affected are subsistence farming, animal husbandry, fishing and informal forestry - most of the world's poor are dependent on them. The annual losses of biodiversity and ecosystems are typically estimated, in terms of social wellbeing, as equivalent to a few percentage points of GDP. If, however, we re-express these in human terms, based on the principle of equity, then the argument for reducing such losses gains considerable strength.
Ethical choices are so deeply engrained into the building blocks of our economic models that we are no longer aware of them. However, if you take the very obvious example of discount rates, a 4% discount rate (most are between 3 and 5 %) means that we value a natural service to our own grandchildren (50 years hence) at one-seventh the benefit we derive from it, a difficult ethical standpoint to defend.
Incorporating the true value of biodiversity and ecosystem services into policy decisions is the ultimate aim of the work being carried out by Pavan Sukhdev and his team. There are ethical choices involved in particular between present and future generations and between people in different parts of the world.

What is the Economic Cost of the Loss of Biodiversity and Ecosystem Services?
Not all values of biodiversity can be measured in economic terms. To many people nature has an intrinsic value that is unrelated to its usefulness to humans. Besides, only part of the full range of benefits provided by biodiversity and ecosystems can be assessed due to current limitations in our understanding of ecological functions and in economic tools. Value estimates from case studies usually take into account only some of the benefits. Also data and valuation studies are not yet available for all types of ecosystems - for example marine ecosystems are less well covered than terrestrial ecosystems. Therefore, it should be kept in mind that estimates of the economic value of biodiversity and ecosystem services are surrounded by many uncertainties and that they provide only lower bounds.
However, economic valuation is a fruitful approach to measure the contribution of biodiversity and ecosystem services to the quality of human life and better understand trade-offs between different possible uses of ecosystems. There is now a large amount of evidence on the market and non-market values placed by people on various benefits from biodiversity and ecosystems, and thus on the costs of their loss. The report presented today presents the results of a preliminary analysis of the costs of the loss of biodiversity and ecosystem services from forests. In the first years of the period 2000 to 2050, it is estimated that in the early years we are losing forest ecosystem services with a value equivalent to around €28 billion each year, and this value increases over the period to 2050 (it has to be noted that a large part of these benefits is currently not included in GDP). Losses of our natural capital stock are felt not only in the year of the loss, as the reduction in the service flow continues over time. Taking these future losses into account, the net present value of services from forests ecosystems that we lose each year is estimated at between € 1.35 trillion and € 3.1 trillion, for discount rates of respectively 4% and 1%.
As indicated above, this is a conservative estimate: it is partial, excluding some ecosystem services, some negative feedback effects of these losses on GDP growth are not fully accounted for, and the values do not account for non-linearities and threshold effects in ecosystem functioning. However, these first results suggest that the socio-economic impacts of biodiversity loss can be substantial. More work will be needed in Phase II of the study to consolidate a large-scale assessment of the costs of losses of the main types of ecosystems worldwide and to compare them with the costs of policies to better protect biodiversity and ecosystems.

The Next Steps
The fundamental requirement is to develop an economic yardstick that is more effective than GDP for assessing the performance of an economy. National accounting systems need to be more inclusive and measure the significant human benefits that ecosystems and biodiversity provide. By no longer ignoring these benefits such systems would help policymakers adopt the right measures and to design appropriate financing mechanisms for conservation.
The good news is that some promising policies are already being tried out in some countries and they have the potential to be spread to other regions. Examples include payments for Ecosystem Services (Costa Rica), habitat banking (USA) and revenue sharing for protected areas (Uganda).
Phase II of the work will examine in greater detail how we can improve our economic models and policies to secure the flow of ecosystem services (nature's benefits), particularly food and water in a transparent and fair way. This will not only protect biodiversity, but will also improve the well-being of our present generation and the generations to come.

Key Additional Information
The TEEB interim report will be presented at a side-event to be held on 29 May at 18:15 at the CBD COP9 venue. The report is available online at the following address:
http://ec.europa.eu/environment/nature/biodiversity/economics/index_en.htm
The reports of several studies carried out as part of Phase I of TEEB are also available on the same link, as well as the proceedings of a workshop held in Brussels on 5-6 March.

http://ec.europa.eu/environment/nature/biodiversity/economics/index_en.htm - official homepage
http://www.ufz.de/index.php?de=16828 - TEEB @ UFZ
http://www.ufz.de/data/economics_ecosystems_biodiversity8717.pdf - direct download
http://www.cbd.int/cop9/ - The ninth meeting of the Conference of the Parties (COP 9) from 19 to 30 May 2008 in Bonn, Germany 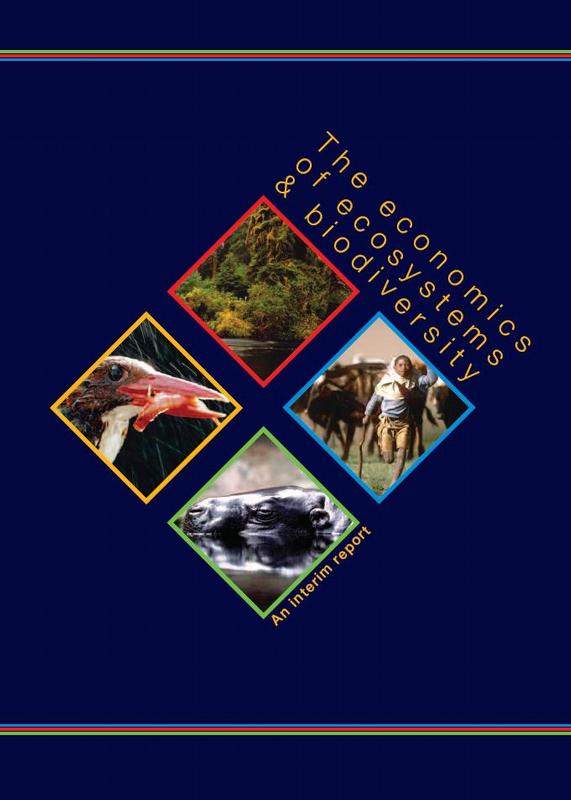