Milestone in MS research: neuroimmunologists find cause of deficit in body’s own immune system

Scientists from the universities in Münster and Munich have discovered what precisely goes wrong in the body in the case of multiple sclerosis (MS). At the same time the neuroscientists were able to demonstrate that for MS, which occurs in bouts, there is a therapy which is tailor-made to eliminate the deficit.

Münster/Munich (mfm/sk) – The researchers involved are talking of a milestone: neuroimmunologists and neuropathologists from the universities in Münster and Munich have discovered what precisely goes wrong in the body in the case of multiple sclerosis (MS). Cells in the innate immune system – the natural killer cells (NK cells) – no longer fulfil their function with MS. They cannot sufficiently keep in check the effector T cells, which are the cells that cause damage in the body in the case of MS. At the same time the neuroscientists were able to demonstrate that for MS, which occurs in bouts, there is a therapy which is tailor-made to eliminate the deficit – a blockade of the interleukin-2 receptor. The drug used for this – Daclizumab – has just been recommended for approval by the European Medicines Agency EMA, so patients will soon be able to use it in their therapy. The effects of the new drug have already been demonstrated in clinical studies, in which the Münster neuroimmunologists were also involved. Their results, achieved in Collaborative Research Centre TR128 (“Multiple Sclerosis”), can be seen in the latest issue of the prestigious journal “Proceedings of the National Academy of Sciences”.

A healthy immune system functions like an efficient police check on traffic: anyone found speeding – in this case, autoreactive T lymphocytes – are singled out and punished. On the other hand, just the threat of a traffic fine is sufficient to prevent the majority of drivers from speeding. This is how people posing a potential threat to others are held in check. In the case of multiple sclerosis, however, this check does not function properly. Autoreactive T cells cross the blood-brain barrier unhindered and pass into the brain, where they attack the nerve cells’ protective layer. Using the traffic image again: anyone speeding is not stopped and they cause serious accidents.

Project leaders Dr. Catharina Groß and Prof. Heinz Wiendl from the Department of General Neurology at Münster University Hospital demonstrated that cells from the body’s innate immune system – the NK cells – help decisively to keep dangerous autoreactive cells in check in healthy people. The researchers were even able to decipher the precise molecular mechanism which NK cells use to protect the immune system. They also revealed that, in the case of MS, not only do the monitoring mechanisms of the immune system fail, but the harmful T cells also use tricks to evade any control on the part of the natural killer cells – just as if traffic offenders were to remove the number plates from their car so as not to be identified.

And one more thing the scientists showed was that there is a promising drug – Daclizumab, a monoclonal antibody – to counteract the interleukin-2 receptor and strengthen the immune-regulatory function of the NK cells. Support, so to speak, in monitoring the traffic. “We were able to demonstrate that Daclizumab not only reinforces the positive immune-regulatory function of the natural killer cells,“ says Dr. Groß, whose work was supported with funding from the German Research Foundation (DFG). Together with her colleagues, one of the things she did was to analyse blood from patients with multiple sclerosis who had already been treated with the new substance. This substance, she says, leads to the harmful T cells again becoming more receptive to regulation by the NK cells. The European Medicines Agency EMA recommended at the end of April that the substance be approved after successful Phase II and Phase III studies on MS patients.

Research successes like this one need not only the expertise of neuroimmunologists in Münster, as Prof. Heinz Wiendl, who heads both the project and a working group, stresses. What progressed the project in particular was the collaboration with neuroscientists Prof. Reinhard Hohlfeld and Dr. Klaus Dornmair from Munich University and Prof. Tanja Kuhlmann from the Department of Neuropathology at Münster University. All these people work together as part of Collaborative Research Centre TR128 (“Multiple Sclerosis”), funded by the German Research Foundation. The Centre’s translational platform provided the blood and cerebrospinal fluid samples from patients which required for analysis. 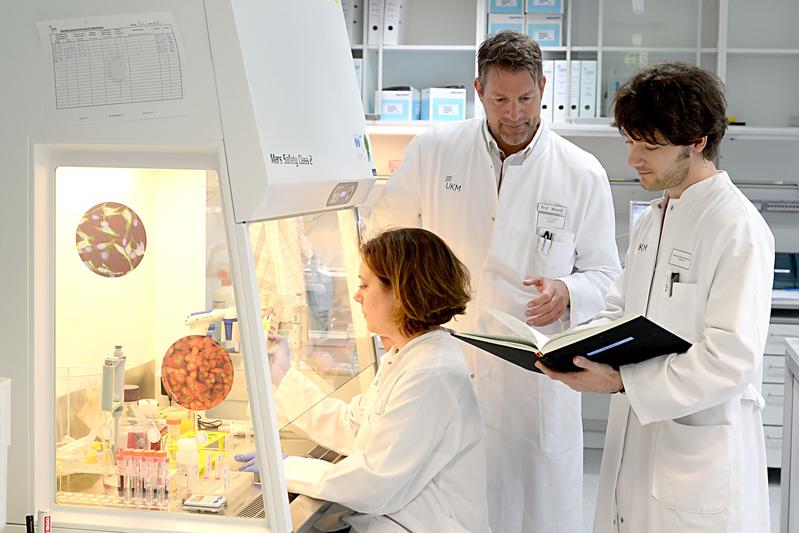