A team of researchers led by Prof. Wolfram Pernice from the Institute of Physics at Münster University has developed a miniature abacus on a microchip which calculates using light signals. With it they are paving the way to the development of new types of computer in which, as in the human brain, the computing and storage functions are combined in one element.

Researchers at the universities of Münster, Exeter and Oxford have developed a miniature “abacus” which can be used for calculating with light signals. With it they are paving the way to the development of new types of computer in which, as in the human brain, the computing and storage functions are combined in one element – in contrast to conventional computers, in which the two are separated in line with the so-called Von Neumann Principle. The study has been published in the latest issue of the journal “Nature Communications”.

“In the article we describe for the first time the realization of an abacus which operates in a purely optical way,” explains Prof. Wolfram Pernice from the Institute of Physics at Münster University who lead the team. “Instead of having wooden beads on a wire, our abacus counts light pulses and stores them in a phase-change material such as is used for rewriteable DVDs.” The optical abacus is installed on a microchip and can be easily manufactured. Using integrated photonic circuits the researchers can store data on it, read the data, and do all the basic arithmetical operations with it. So far, the researchers have succeeded in calculating with two-digit numbers using two photonic phase-change cells, but the extension to large multi-digit numbers simply involves the use of more cells.

The long-term aim that the researchers have is the creation of so-called neuromorphic computer architectures – i.e. computers which replicate the human brain. One central feature is the elimination of the separation between processor and data storage. “We are also computing with light – and not with electrons, as is the case with traditional computers,” says co-author Prof. Harish Bhaskaran from the University of Oxford. “This means that we can develop much faster systems which can be connected using integrated optical waveguides.”

To this end, the researchers need a variety of components, including artificial neuron type cells and artificial synapses, i.e. the “connection points” between neurons. The researchers already created the artificial synapses just recently as part of another study. “If we are successful in developing a complete photonic computer system, we could process large amounts of data very quickly – without making a detour via electronic systems,” says Prof. David Wright, a co-author from the University of Exeter.

The work involves basic research. Whether and when it can be put into practice is not yet certain, but according to the scientists these initial results are very promising indeed. The study was funded by the German Research Foundation.

<
Illustration of a chip-scale optical abacus with integrated optical waveguides. The memory cells are ...
Illustration: WWU/Johannes Feldmann
None

Illustration of a chip-scale optical abacus with integrated optical waveguides. The memory cells are located at the crossings. The abacus is shown for demonstration. 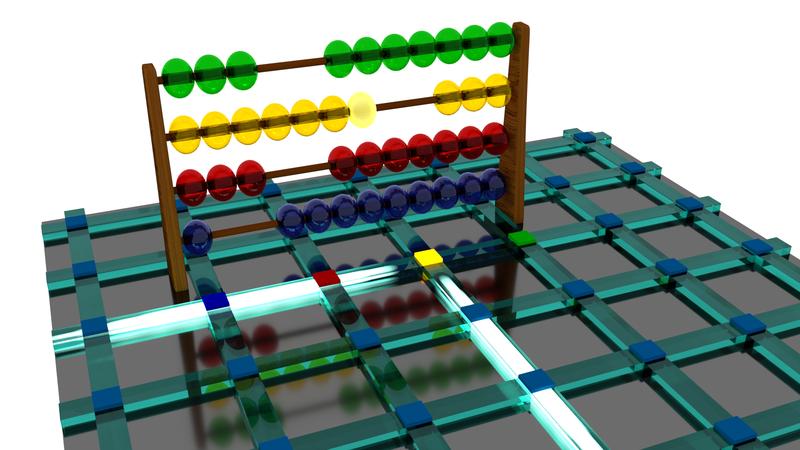