On Sunday, July 7, 2019, B-Human - the joint team of the University of Bremen and the German Research Center for Artificial Intelligence (DFKI) - once again proved to be the most successful team in the RoboCup Standard Platform League. In an exciting final against the Nao-Team HTWK from Leipzig, the reigning German champion managed to regain the world championship title in Sydney, Australia, with a 2:1 victory. Togehter with Berlin United from the Humboldt-Universität zu Berlin, B-Human also won the mixed team competetion as team "B & B".

After an outstanding preliminary round with high scores, no goals against them and an equally confident quarter and semi final, B-Human was able to prevail against the Leipzig football robots in the final of the RoboCup World Championship. The two German teams faced each other in the final for the fourth time. In 2018 the Nao-Team HTWK managed to beat B-Human for the first time - an exciting final was therefore inevitable. In the first half, the Leipzig team was able to take the lead with a short shot across the Bremen defence. After several missed chances, B-Human scored the desired equalizer five minutes before the final whistle. This was preceded by a foul from the Leipzig team in the Bremen half. B-Human then took the free-kick deep into the opponent's half, right in front of the striker's feet, who was able to place the ball directly into the goal. Just a minute later, a long-range shot by B-Human finally brought the score 2:1, securing victory.

One of the special challenges in Sydney was playing alongside large windows with changing lighting conditions, bright surfaces, and dark shadows on the pitch. B-Human successfully met these extremely difficult machine vision conditions with innovative deep learning methods. After ball recognition had already been supported by a neural network in recent years, this time a so-called convolutional neural network was used for robot recognition. This network determines the positions and distances of all NAOs contained in a camera image taken by the robot. It scores not only with a high recognition rate, but also with an enormously high execution speed: It only takes a few milliseconds to analyze an image captured by the robot. The Bremen team also presented the scientific work on this topic at the RoboCup Symposium.

In addition to the actual competition games, B-Human also took part in the mixed team competition. Here two teams join together to compete with other mixed teams in a small tournament. Together with Berlin United from Humboldt-Universität zu Berlin, the Bremen team formed the "B & B" team in Sydney, with which they effortlessly reached the final. Here, they met the Leipzig NAOs, who competed together with the Bembelbots of the Goethe University Frankfurt am Main as "Team Team". Neither of the two equally strong teams was able to assert themselves, resulting in a penalty shootout after a 0:0 draw. B & B scored the decisive penalty after which they were able to hold off Team Team’s subsequent shot and triumphed in the end.

Currently, B-Human consists of about 15 students from the University of Bremen as well as the supervising scientists Dr. Thomas Röfer from the DFKI research department Cyber-Physical Systems, which is headed by Prof. Dr. Rolf Drechsler, and Dr. Tim Laue from the University of Bremen. CONTACT Software, the leading provider of solutions for product processes and digital transformation, has been the main sponsor of B-Human since 2017.

Photos:
Photos are available under the link https://b-log.b-human.de (B-Human-Blog). This may be used with pleasure under indication of the copyright.

<
he B-Human team celebrating a few minutes after the win of the Standard Platform League Competition ...
B-Human

<
Two robots arrive at the ball and both try to gain possession. The photo was taken during the semifi ...
Universität Bremen, Foto: Tim Laue

he B-Human team celebrating a few minutes after the win of the Standard Platform League Competition at RoboCup 2019 in Sydney. 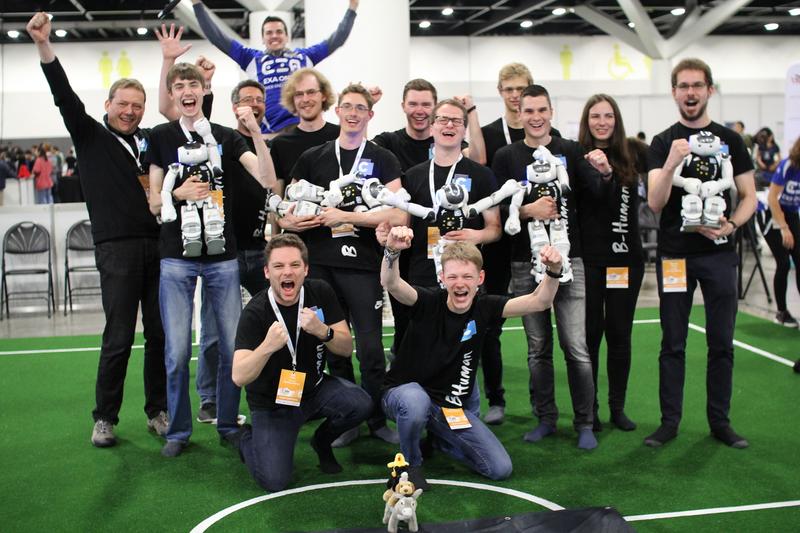 Two robots arrive at the ball and both try to gain possession. The photo was taken during the semifinal match against rUNSWift at RoboCup 2019 in Sydney. 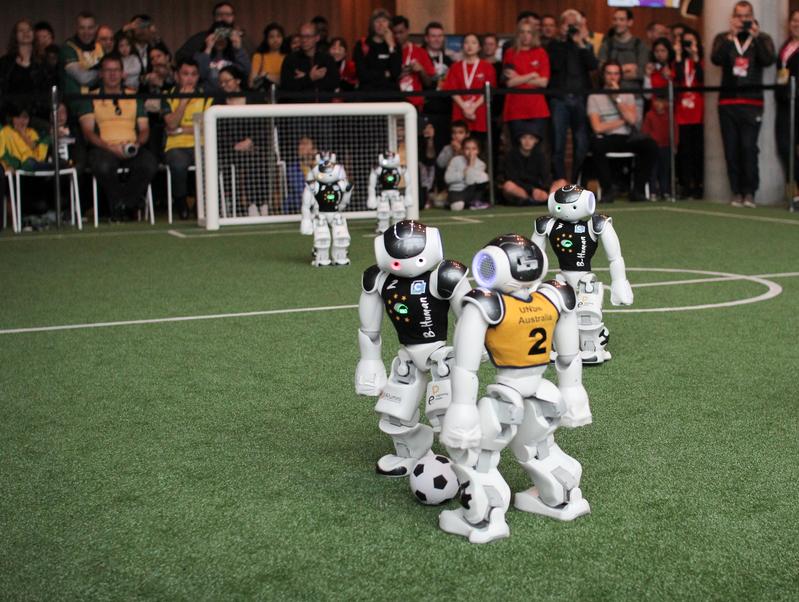