Ancient Marathon Trophy from the 1896 Olympics Discovered in the Collection of the University of Münster: The skyphos was awarded during the first modern-day Olympic Games in 1896 and had remained undetected in the the "Peek Collection" for years. The trophy awarded to Spyros Louis, the first marathon winner of the modern-day Olympic Games in 1896, has returned to its home country. Rector Prof. Dr Johannes Wessels officially gifted the ancient skyphos discovered at the Archaeological Museum to the Greek Ministry of Culture and Sports on 13 November.

Provenance research revealed its historical origins: an ancient trophy, awarded to Spyridon (“Spyros”) Louis, winner of the first marathon of the modern-day Olympic Games (1896) and later a Greek national hero, was stored in the depository of the Archaeological Museum of the University of Münster (WWU) for decades. The vessel, a skyphos dating back to the 6th century BC, has now returned to its homeland of Greece. A WWU delegation headed by Rector Prof. Dr Johannes Wessels handed over the former athletic trophy as a gift to the Greek Ministry of Culture and Sports in an official ceremony on Wednesday, 13 November.

Greek officials announced that the skyphos would be given a place of honour in the Museum of the History of the Ancient Olympic Games (formerly the Archaeological Museum) in Olympia. “Its future place of honour is where the skyphos was naturally meant to be. I am very happy that the University of Münster could help make this possible,” underlined Münster University's Rector Prof. Johannes Wessels.

“The skyphos has a highly symbolic significance for Greece, the birthplace of the Olympic Games. We naturally wanted to give it back,” explained the director of the Archaeological Museum of the University of Münster, Prof. Dr Achim Lichtenberger, who also participated in the ceremony. “Morally speaking and with respect to sports history, this piece belongs in Greece,” added museum curator Dr Helge Nieswandt.

The visually striking trophy depicting painted images of runners and judges was part of the private “Peek Antiquities Collection” which the Archaeological Museum purchased at the end of the 1980s. The collection consists of approximately 70 ancient ceramic vessels, mostly bowls, carafes and skyphoi. The items had belonged to Prof. Dr Werner Peek (1904-1994), a famous epigraphist and classical philologist. Born in Bielefeld, the prominent researcher taught at universities in Berlin and Halle and died in Bielefeld. There is no information as to when and how the skyphos found its way to Germany. Werner Peek lived in Athens for a time in the 1930s.

Dr Georgos Kavvadias, director of the collections of vases, small art and metal works at the Greek National Museum in Athens, recognised the historical significance of the winner’s trophy which had most likely been made in Boeotia (central Greece) between 540 and 520 BC. About five years ago, the archaeologist stumbled across a photo of the skyphos in an academic monograph published in Münster. He contacted the University and immediately received support with his provenance research from the University’s academic staff. During a recent visit to Münster where he held a presentation on his discovery, he was overcome with emotion when he viewed the skyphos in person. “This is a dream,” he said.

Giorgos Kavvadias could have seen the skyphos in Münster much earlier had circumstances allowed. The vessel depicting athletic young men had been displayed for many years in the “Sports Cabinet” at the Archaeological Museum. The skyphos will be returned to the museum one day – promised Georgos Kavvadias – in form of a replica from Athens as a sign of his deep gratitude.

<
The ancient trophy, the"Skyphos"
Greek Ministry of Culture and Sports

Rector Prof. Dr Johannes Wessels handed the athletic trophy as a gift to the Greek Ministry of Culture and Sports 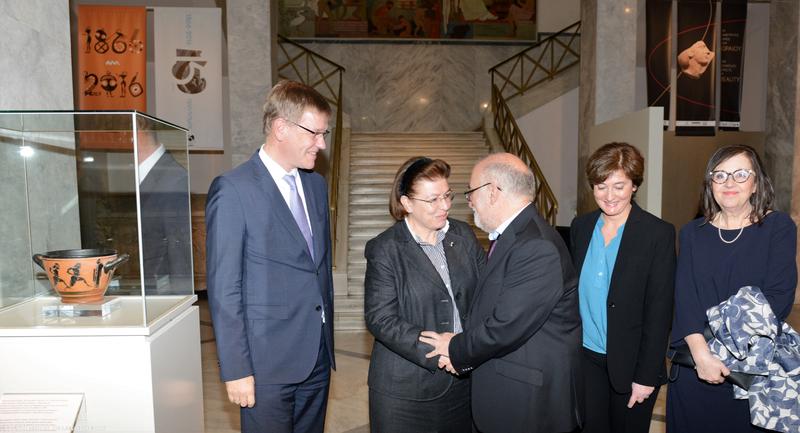 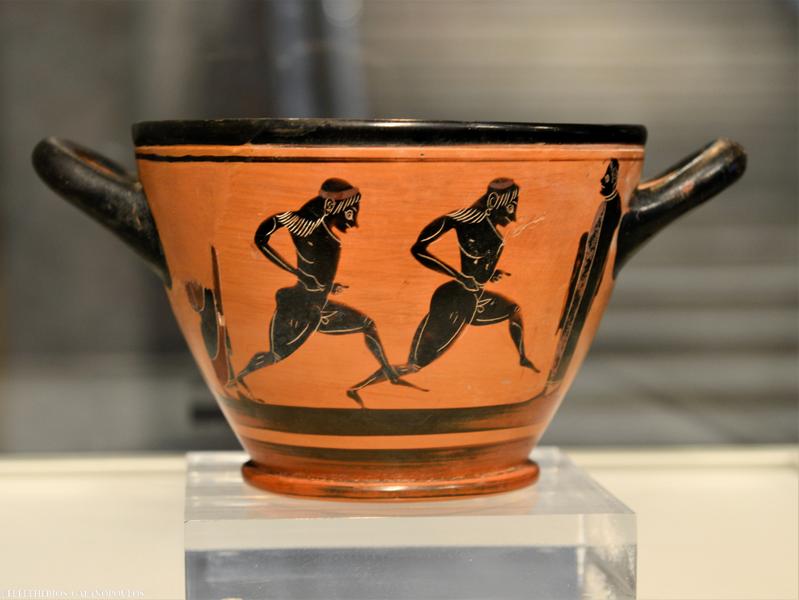