Long-lasting and precise dosing of medication thanks to an oil-hydrogel mixture: Active droplets
Advanced Search ?

Long-lasting and precise dosing of medication thanks to an oil-hydrogel mixture: Active droplets

Using a mixture of oil droplets and hydrogel, medical active agents can be not only precisely dosed, but also continuously administered over periods of up to several days. The active agents inside the active droplets are released at a constant rate, decreasing the risk of over- or underdosage.

Actually, Prof. Job Boekhoven was studying the origins of life: Together with his team at the Technical University of Munich TUM, the chemist wanted to understand how molecules in the primordial ocean had managed to combine and form the precursors of the first living cells.

"In our research work we experimented with oil droplets, among other things. We were especially interested in mechanisms that protect molecules from degradation. We found that unstable molecules that form oil droplets would survive much longer than molecules that cannot form droplets. In a sense, the droplets protect the molecules inside.”

However, the oily shield is not entirely impermeable: Some of the oil molecules react with the surrounding water. This hydrolysis causes the droplets to slowly but continuously lose mass and shrink until they eventually disappear. "The constant decay of these 'active droplets', led us to the idea of using them to dose drugs," recalls Boekhoven.

Safe from over- or underdosing

Pharmacologists have long sought methods for administering active agents at a constant rate. The ingredients in ointments or tablets are usually released quickly, increasing the risk of an overdose. Moreover, the fast rate of release shortens the duration of the intended effect. Methods for releasing drugs over extended periods of time at a constant rate are rare and often complicated to fabricate.

"We found that the droplets continuously release the drug while they get smaller and smaller. The consequence is that over the entire release period, the drug release rate remains constant", explains Boekhoven. "The power of this approach lies in its simplicity. You need only three components: droplets made of a hydrolyzable oil, a drug that partitions in the oil, and a hydrogel that stabilizes the position of the droplets.”

Many fields of application

The new oil-hydrogel mix allows active agents to be administered not only continuously but also at a predetermined rate. The droplets can be loaded with larger or smaller doses of active substances. These are released as soon as the oil droplets come into contact with the water in blood or tissue. The hydrolysis proceeds at a constant rate until the droplets have dissipated completely.

These “active droplets” have many potential fields of application. They could, for example, be deployed in disinfectant or healing-promoting sore pads to treat poorly healing wounds. A patent application has already been filed for the oil-hydrogel material.

The research was funded by the German Research Foundation (DFG) in the context of the Transregio 235 Collaborative Research Center, the Cluster of Excellence “Origins” and via the TUM Institute for Advanced Study with funds from the German Excellence Initiative and the 7th European Framework Program.

https://www.tum.de/nc/en/about-tum/news/press-releases/details/35918/ Link to the press release

Prof. Job Boekhoven and Caren Wanzke at the microscope. The image (right screen) shows droplets of the hydrolyzable oil embedded in a hydrogel. 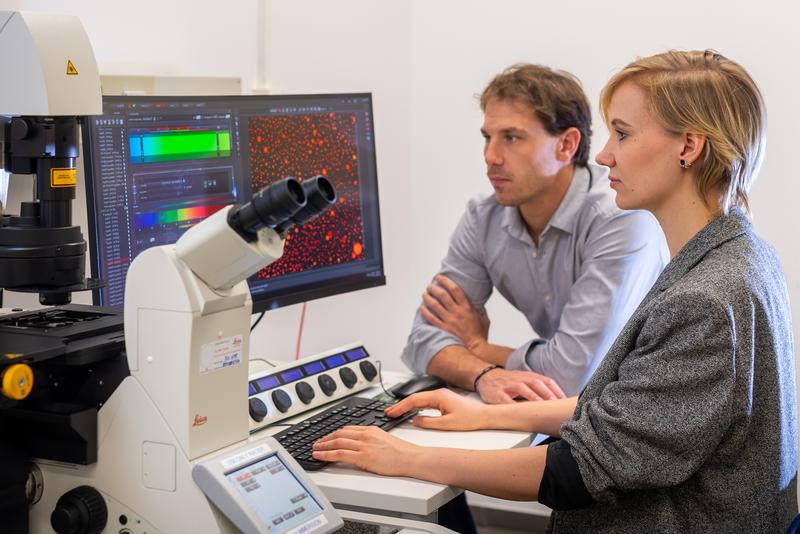 Fluorescence microscopy image of oil droplets embedded in a hydrogel. 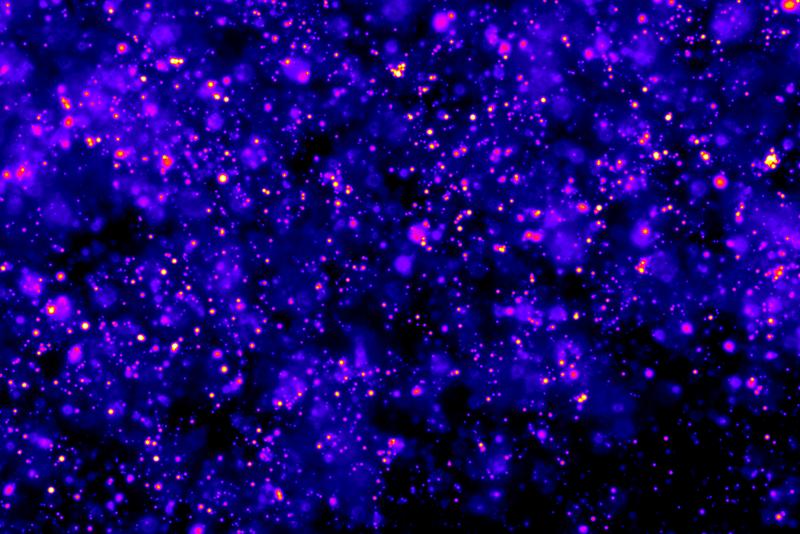