Science on the platform edge

The Humboldt-Universität zu Berlin (HU) presents an exhibition on the interactions between nature and humans in the new Unter den Linden underground station on line 5, which opened today. On 16 panels measuring 6.2 by 1.8 metres, the pictures in this exhibition artistically visualise the issues on the table, across the most diverse of scientific disciplines, to be addressed in the geological age of the Anthropocene.

The term “Anthropocene” is derived from the ancient Greek “anthropos” for human and “kainos” for new or recent. In our age, humans are influencing the earth’s system with their actions in a way that has never been seen before – with consequences for everyone. Where and how this is happening is revealed in a very impressive and aesthetic way by the “Wimmelbilder” – richly detailed pictures of hidden elements – created by the Berlin graphic artist Nele Brönner.
Grappling with global warming and migration when changing from the U6 to the U5

From now on, day after day, thousands of Berliners and guests of the city will be able to grapple with the questions and consequences of global warming, migration, displacement and cross-border networking while waiting for the next underground train.

669 terms, 258 picture elements, 750 ml of the best ink, at least 21.6 metres of the finest Italian paper and a number of intensive discussions with scientists were necessary to design the hidden object pictures that form the core of the exhibition. The elements that make up the environments of the Anthropocene that have been constructed are evoked verbally. The lists alternate with graphic animations of typical structures and concepts that are derived from engagement with the topic.
Time and again, people succumb to the charm of these pictures

Artists have been using hidden object pictures for centuries to depict complex relationships and the interweaving of events and stories. One might recall the “Garden of Earthly Delights” by Hieronymus Bosch or the famous drawing by Alexander von Humboldt of Mount Chimborazo. Time and again, people succumb to the special charm of these pictures, in which there is so much to discover. “We are really looking forward to this way, which is really unusual for us, of bringing science into people’s everyday lives. We hope that the passengers – whether young or old – will be encouraged to get involved with science and the topics it addresses,” says Sabine Kunst, President of the Humboldt-Universität.

In the context of the expansion of underground line 5, the Berlin Senate had declared two of the new stations to be themed stations and decided to make them ad-free. One of them is the so-called Science Station of Unter den Linden/Friedrichstrasse, in the immediate vicinity of the Humboldt-Universität zu Berlin.

The Governing Mayor and Senator for Science of Berlin, Michael Müller: “Even if science tends rather to shun tunnel vision and always has groundbreaking things in mind, it is a truly terrific match for the BVG. Both of them move Berlin and can be found everywhere in our city. On the new U5, it’s now time to say: Next stop, science! The exhibition from the Humboldt-Universität in Unter den Linden underground station is a wonderful way of bringing research findings to the heart of society. This is a central aspiration of our city of knowledge and also our goal for 2021, to celebrate a whole year of science in Berlin.”

The science exhibition project in Unter den Linden underground station fits in with the University’s Open Humboldt strategy. In the tradition of its founding fathers, the Alma Mater thereby combines its cutting-edge research with innovative stimuli from society. In the process, a new kind of dialogue with politics, art, culture and society in the context of scientific production and science communication also results in very specific projects, for example in the Humboldt Laboratory, which is due to open its digital doors in the Humboldt Forum in January 2021.

The exhibition in the Science Station of Unter den Linden/Friedrichstrasse is a joint project of the Humboldt-Universität zu Berlin, Schiel-Projektgesellschaft, the exhibition agency TheGreenEyl, and the Office for Precarious Concepts, as well as the graphic designer Nele Brönner.

<
On the platform of “Unter den Linden” on the U5, BVG guests can now use the pictures by artist Nele ...
Matthias Heyde
Matthias Heyde, HU Berlin

On the platform of “Unter den Linden” on the U5, BVG guests can now use the pictures by artist Nele Brönner to engage with scientific topics – and maybe skip a train now and then to do so. 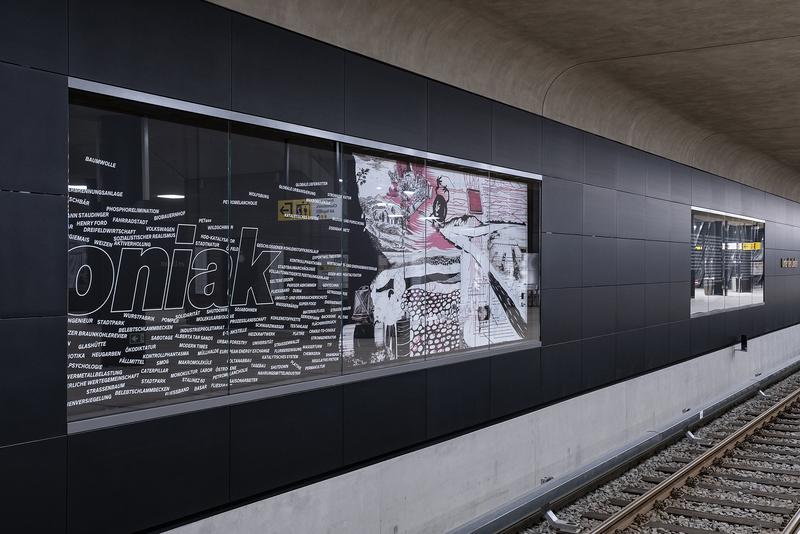