Home > Press release: A memory without a brain: How a single ...

A memory without a brain: How a single cell slime mold makes smart decisions without a central nervous system

Having a memory of past events enables us to take smarter decisions about the future. Researchers at the Max-Planck Institute for Dynamics and Self-Organization (MPI-DS) and the Technical University of Munich (TUM) have now identified how the slime mold Physarum polycephalum saves memories – although it has no nervous system.

The ability to store and recover information gives an organism a clear advantage when searching for food or avoiding harmful environments. Traditionally it has been attributed to organisms that have a nervous system.

A new study authored by Mirna Kramar (MPI-DS) and Prof. Karen Alim (TUM and MPI-DS) challenges this view by uncovering the surprising abilities of a highly dynamic, single-celled organism to store and retrieve information about its environment.

Window into the past

The slime mold Physarum polycephalum has been puzzling researchers for many decades. Existing at the crossroads between the kingdoms of animals, plants and fungi, this unique organism provides insight into the early evolutionary history of eukaryotes – to which also humans belong.

Its body is a giant single cell made up of interconnected tubes that form intricate networks. This single amoeba-like cell may stretch several centimeters or even meters, featuring as the largest cell on earth in the Guinness Book of World Records.

Decision making on the most basic levels of life

The striking abilities of the slime mold to solve complex problems, such as finding the shortest path through a maze, earned it the attribute “intelligent”. It intrigued the research community and kindled questions about decision making on the most basic levels of life.

The decision-making ability of Physarum is especially fascinating given that its tubular network constantly undergoes fast reorganization – growing and disintegrating its tubes – while completely lacking an organizing center.

The researchers discovered that the organism weaves memories of food encounters directly into the architecture of the network-like body and uses the stored information when making future decisions.

The network architecture as a memory of the past

“It is very exciting when a project develops from a simple experimental observation”, says Karen Alim, head of the Biological Physics and Morphogenesis group at the MPI-DS and Professor on Theory of Biological Networks at the Technical University of Munich.

When the researchers followed the migration and feeding process of the organism and observed a distinct imprint of a food source on the pattern of thicker and thinner tubes of the network long after feeding.

“Given P. polycephalum's highly dynamic network reorganization, the persistence of this imprint sparked the idea that the network architecture itself could serve as memory of the past“, says Karen Alim. However, they first needed to explain the mechanism behind the imprint formation.

Decisions are guided by memories

For this purpose the researchers combined microscopic observations of the adaption of the tubular network with theoretical modeling. An encounter with food triggers the release of a chemical that travels from the location where food was found throughout the organism and softens the tubes in the network, making the whole organism reorient its migration towards the food.

“The gradual softening is where the existing imprints of previous food sources come into play and where information is stored and retrieved”, says first author Mirna Kramar. “Past feeding events are embedded in the hierarchy of tube diameters, specifically in the arrangement of thick and thin tubes in the network.”

“For the softening chemical that is now transported, the thick tubes in the network act as highways in traffic networks, enabling quick transport across the whole organism”, adds Mirna Kramar. “Previous encounters imprinted in the network architecture thus weigh into the decision about the future direction of migration.”

Design based on universal principles

The authors highlight that the ability of Physarum to form memories is intriguing given the simplicity of this living network. “It is remarkable that the organism relies on such a simple mechanism and yet controls it in such a fine-tuned manner,” says Karen Alim.

“These results present an important piece of the puzzle in understanding the behavior of this ancient organism and at the same time points to universal principles underlying behavior. We envision potential applications of our findings in designing smart materials and building soft robots that navigate through complex environments”, concludes Karen Alim. 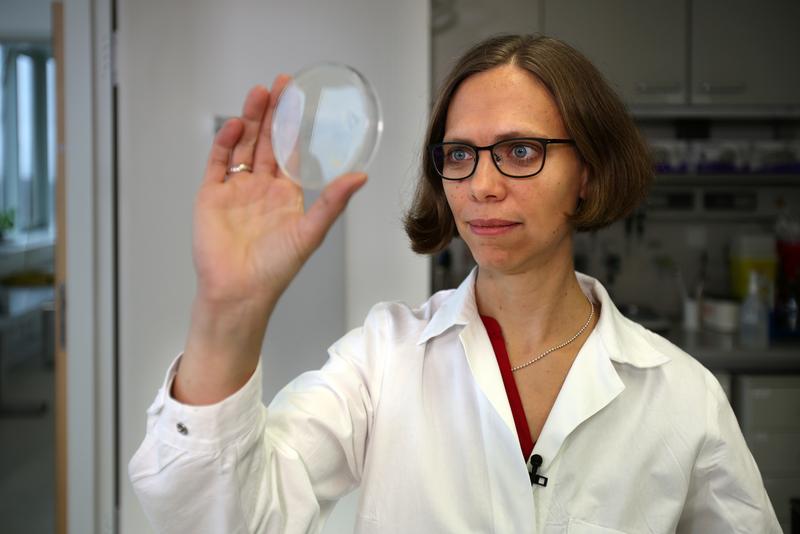 The slime mold Physarum polycephalum consists of a single biological cell. Microinjection allows to mark the flow in Physarum in color. 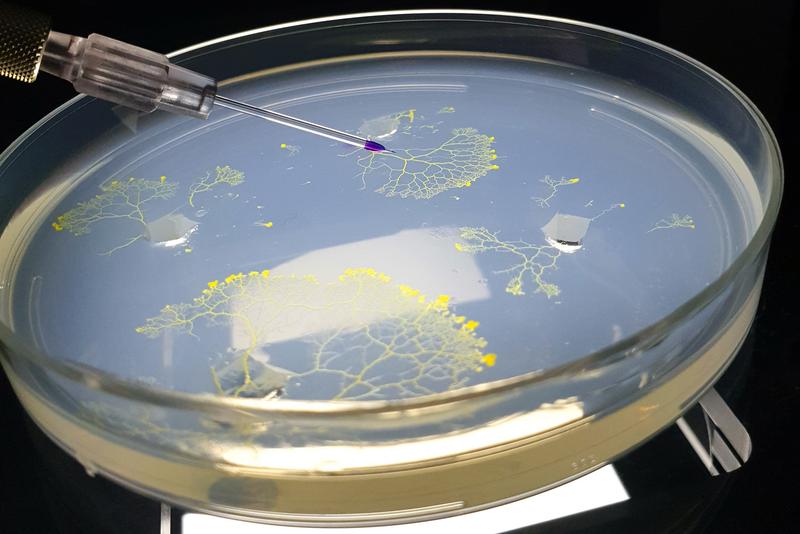