Home > Press release: What is killing bald eagles in the U.S.?

What is killing bald eagles in the U.S.?

Bald eagles, as well as other wildlife, have been succumbing to a mysterious neurodegenerative disease in the southern United States since the 1990s. New research by Martin Luther University Halle-Wittenberg (MLU) in Germany and the University of Georgia, USA, identifies the cause of these deaths: a toxin produced by cyanobacteria that grow on invasive aquatic plants. The problem is potentially exacerbated by herbicides used to control those plants. The results were published in "Science".

In 1994, bald eagles were dying on a mass scale in the U.S. state of Arkansas. The animals were losing control over their bodies, and holes were developing in their brains. A previously unknown neurodegenerative disease, termed vacuolar myelinopathy (VM), was identified. "The origin of the disease was a complete mystery," says Professor Timo Niedermeyer from the Institute of Pharmacy at MLU.

Later on, American researchers found that not only eagles were affected, but also their herbivorous prey. The scientists discovered a connection to an invasive aquatic plant (Hydrilla verticillata) that grows in freshwater lakes in the affected regions. However, there were still some lakes with the aquatic plant where the disease was not manifesting. In 2005 Susan B. Wilde, a professor at the Warnell School of Forestry and Natural Resources at the University of Georgia, identified a previously unknown cyanobacterium on the leaves of Hydrilla verticillata, which appeared to be the cause of the disease. It turned out that vacuolar myelinopathy only occurs in places where the cyanobacterium colonizes the invasive plant. She called the bacterium "eagle killer that grows on Hydrilla": Aetokthonos hydrillicola.

"I stumbled across a press release issued by the university in Georgia and was fascinated by these findings, because I’ve worked with cyanobacteria for years," says Niedermeyer. He had samples sent to him, cultivated the bacteria in the laboratory and sent them back to the U.S. for further testing. But the tests came back negative: The bacteria from the lab did not induce the disease. "It’s not just the birds that were going crazy, we were too. We wanted to figure this out," says Niedermeyer. Once again, he had colonized leaves sent to him. Steffen Breinlinger, a doctoral student in his research group, then used a new imaging mass spectrometer to investigate the composition on the surface of the plant’s leaf, molecule by molecule. He discovered a new substance that only occurs on the leaves where the cyanobacteria grow, but is not produced in the cultivated bacteria.

His investigations into the chemical structure of the isolated molecule showed that it contains five bromine atoms. "The structure is really spectacular," says Breinlinger. The properties are unusual for a molecule formed by bacteria. And they provide an explanation for why the toxin did not form under laboratory conditions. Standard culture media in which cyanobacteria grow do not contain bromide. "We then added bromide to our lab cultures, and - the bacteria started producing the toxin," says Breinlinger. Wilde and her colleagues tested the isolated molecule in birds, and finally, after almost a decade of research in the Wilde and Niedermeyer labs, they had the proof: the molecule does trigger VM. According to the name of the bacterium, the researchers call their discovery aetokthonotoxin, "poison that kills the eagle". "Finally, we did not only catch the murderer, but we also identified the weapon the bacteria use to kill those eagles," says Wilde.

A research group participating in the study from the Czech Academy of Sciences also found sections of DNA containing genetic information for the synthesis of the new molecule. Why the cyanobacteria form the toxin on the aquatic plants in the first place, however, has yet to be studied. One of the herbicides used to combat the invasive aquatic plant might play a crucial part in VM occurrence: It contains bromide and thus might stimulate toxin production.

The neurological disease has not yet occurred in Europe, and no instance of the toxin-forming cyanobacterium has been reported.

The research has been supported by the Deutsche Forschungsgemeinschaft (German Research Foundation, DFG), the Czech Science Foundation GAČR, the US Department of Interior, US Fish and Wildlife Service, the Florida Fish & Wildlife Conservation Commission, the Gulf States Marine Fisheries Commission, the National Institute of Food and Agriculture McIntire-Stennis Capacity Grant and the American Eagle Foundation.

Reprinted with permission from AAAS

<
Bacterial colonies of the cyanobacterium A. hydrillicola growing on a leaf of the invasive aquatic p ...
Susan Wilde
UGA 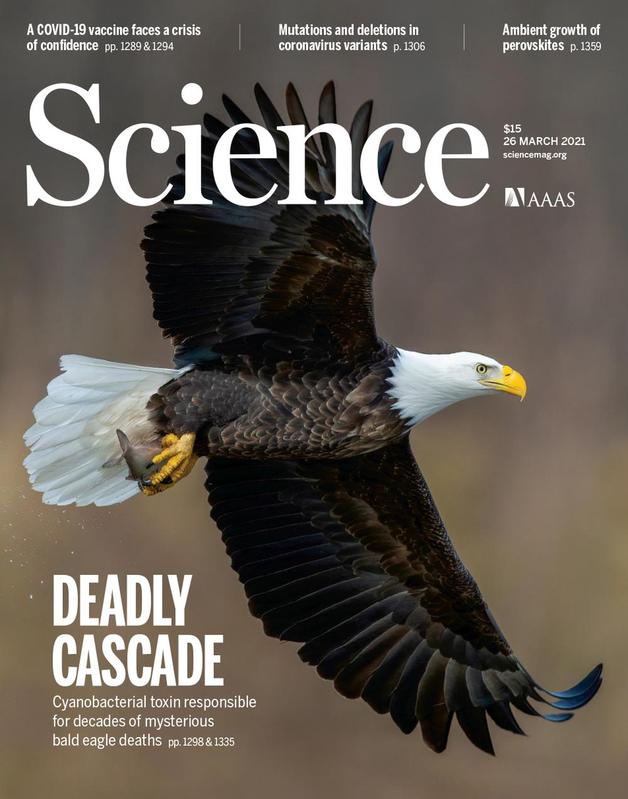 Bacterial colonies of the cyanobacterium A. hydrillicola growing on a leaf of the invasive aquatic plant H. verticillata. 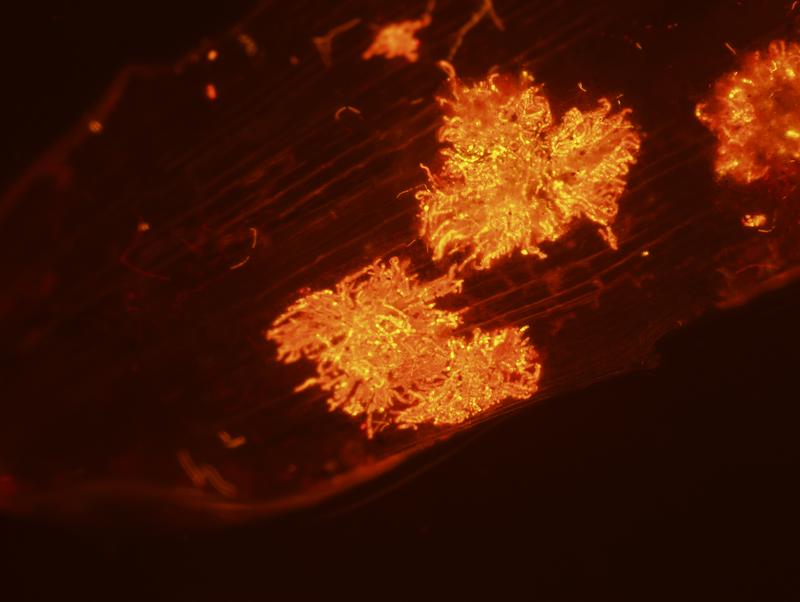