Unconscious decisions in the brain

Already several seconds before we consciously make a decision its outcome can be predicted from unconscious activity in the brain. This is shown by a study of scientists from the Max Planck Institute for Human Cognitive and Brain Sciences in Leipzig, in collaboration with the Charité University Hospital and the Bernstein Center for Computational Neuroscience in Berlin. The researchers from the group of Professor John-Dylan Haynes used a brain scanner to investigate what happens in the human brain just before a decision is made. "Many processes in the brain occur automatically and without involvement of our consciousness. This prevents our mind from being overloaded by simple routine tasks. But when it comes to decisions we tend to assume they are made by our conscious mind. This is questioned by our current findings." The study by Haynes and his colleagues Chun Siong Soon, Marcel Brass and Hans-Jochen Heinze will be published in the May issue of Nature Neuroscience and will available online on Sunday April 13th at 1pm EST (Embargo date).

In the study participants could freely decide if they wanted to press a button with their left or right hand. They were free to make this decision whenever they wanted, but had to remember at which time they felt they had made up their mind. The aim of the experiment was to find out what happens in the brain in the period just before person felt the decision was made. The researchers found that it was possible to predict from brain signals which option participants would take already seven seconds before they consciously made their decision. Normally researchers look what happens when the decision is made, but not what happens several seconds before. The fact that decisions can be predicted so long before they are made is a striking finding.

This unprecedented prediction of a free decision was made possible by sophisticated computer programs that were trained to recognize typical brain activity patterns preceding each of the two choices. Micropatterns of activity in frontopolar cortex were predictive of the choices even before participants knew which option they were going to choose. The decision could not be predicted perfectly, but prediction was clearly above chance. This suggests that the decision is unconsciously prepared ahead of time but the final decision might still be reversible.

"Most researchers investigate what happens when people have to decide immediately, typically as a rapid response to an event in our environment. Here we were focusing on the more interesting decisions that are made in a more natural, self-paced manner", Haynes explains.

More than 20 years ago the American brain scientist Benjamin Libet found a brain signal, the so-called "readiness-potential" that occurred a fraction of a second before a conscious decision. Libet's experiments were highly controversial and sparked a huge debate. Many scientists argued that if our decisions are prepared unconsciously by the brain, then our feeling of "free will" must be an illusion. In this view it is the brain that makes the decision, not a person's conscious mind. Libet's experiments were particularly controversial because he found only a brief time delay between brain activity and the conscious decision.

In contrast, Haynes and colleagues now show that brain activity predicts even up to 7 seconds ahead of time how a person is going to decide. But they also warn that the study does not finally rule out free will: "Our study shows that decisions are unconsciously prepared much longer than previously thought. But we do not know yet where the final decision is made. Especially we still need to investigate whether a decision prepared by these brain areas can still be reversed."

<
Brain regions (shown in green) from which the outcome of a participant's decision can be predicted b ...
Image: John-Dylan Haynes
None

<
Brain regions (shown in green) from which the outcome of a participant's decision can be predicted b ...
Image: John-Dylan Haynes
None

Brain regions (shown in green) from which the outcome of a participant's decision can be predicted before it is made. The top shows an enlarged 3D view of a pattern of brain activity in one informative brain region. Computer-based pattern classifiers can be trained to recognize which of these micropatterns typically occur just before either left or right decisions. These classifiers can then be used to predict the outcome of a decision up to 7 seconds before a person thinks to be consciously making the decision. 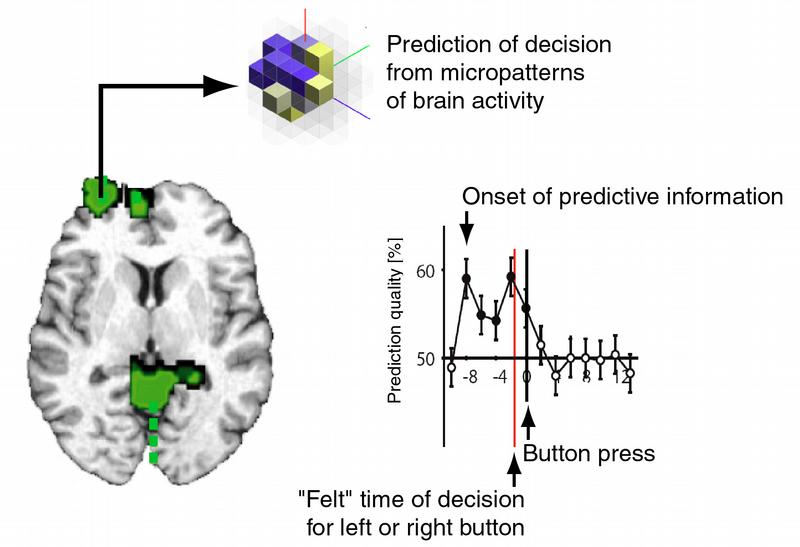