The world's oldest recorded tree is a 9,550 year old spruce in the Dalarna province of Sweden. The spruce tree has shown to be a tenacious survivor that has endured by growing between erect trees and smaller bushes in pace with the dramatic climate changes over time.

For many years the spruce tree has been regarded as a relative newcomer in the Swedish mountain region. "Our results have shown the complete opposite, that the spruce is one of the oldest known trees in the mountain range," says Leif Kullman, Professor of Physical Geography at Umeå University.
A fascinating discovery was made under the crown of a spruce in Fulu Mountain in Dalarna. Scientists found four "generations" of spruce remains in the form of cones and wood produced from the highest grounds. The discovery showed trees of 375, 5,660, 9,000 and 9,550 years old and everything displayed clear signs that they have the same genetic makeup as the trees above them. Since spruce trees can multiply with root penetrating braches, they can produce exact copies, or clones. The tree now growing above the finding place and the wood pieces dating 9,550 years have the same genetic material. The actual has been tested by carbon-14 dating at a laboratory in Miami, Florida, USA. Previously, pine trees in North America have been cited as the oldest at 4,000 to 5,000 years old.

In the Swedish mountains, from Lapland in the North to Dalarna in the South, scientists have found a cluster of around 20 spruces that are over 8,000 years old. Although summers have been colder over the past 10,000 years, these trees have survived harsh weather conditions due to their ability to push out another trunk as the other one died. "The average increase in temperature during the summers over the past hundred years has risen one degree in the mountain areas," explains Leif Kullman. Therefore, we can now see that these spruces have begun to straighten themselves out. There is also evidence that spruces are the species that can best give us insight about climate change.

The ability of spruces to survive harsh conditions also presents other questions for researchers. Have the spruces actually migrated here during the Ice Age as seeds from the east 1,000 kilometres over the inland ice that that then covered Scandinavia? Do they really originate from the east, as taught in schools? "My research indicates that spruces have spent winters in places west or southwest of Norway where the climate was not as harsh in order to later quickly spread northerly along the ice-free coastal strip," says Leif Kullman. "In some way they have also successfully found their way to the Swedish mountains."

The study has been carried out in cooperation with the County Administrative Boards in Jämtland and Dalarna.

<
The world's oldest recorded tree is a 9,550 year old spruce in the Dalarna province of Sweden. The s ...
Photo: Leif Kullman
None

The world's oldest recorded tree is a 9,550 year old spruce in the Dalarna province of Sweden. The spruce tree has shown to be a tenacious survivor that has endured by growing between erect trees and smaller bushes in pace with the dramatic climate changes over time. 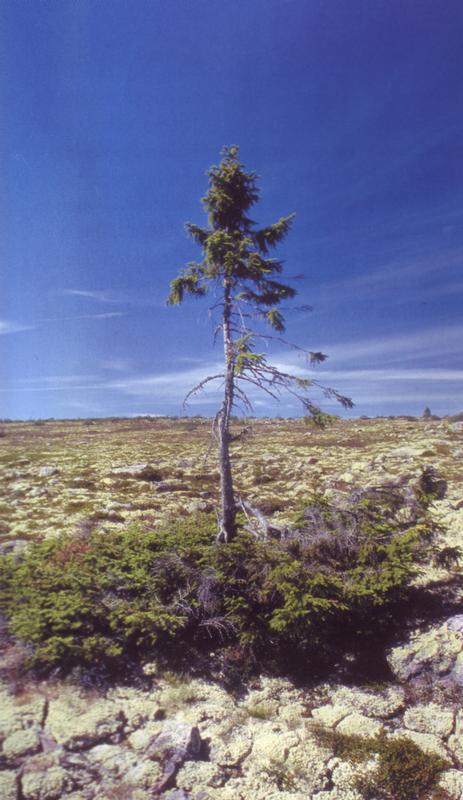