The Antarctic deep sea gets colder

Bremerhaven, April 21, 2008. The Antarctic deep sea gets colder, which might stimulate the circulation of the oceanic water masses. This is the first result of the Polarstern expedition of the Alfred Wegener Institute for Polar and Marine Research in the Helmholtz Association that has just ended in Punta Arenas/Chile. At the same time satellite images from the Antarctic summer have shown the largest sea-ice extent on record. In the coming years autonomous measuring buoys will be used to find out whether the cold Antarctic summer induces a new trend or was only a "slip".

The Polarstern expedition ANT-XXIV/3 was dedicated to examining the oceanic circulation and the oceanic cycles of materials that depend on it. Core themes were the projects CASO (Climate of Antarctica and the Southern Ocean) and GEOTRACES, two of the main projects in the Antarctic in the International Polar Year 2007/08.

Under the direction of Dr Eberhard Fahrbach, Oceanographer at the Alfred Wegener Institute, 58 scientists from ten countries were on board the research vessel Polarstern in the Southern Ocean from 6 February until 16 April, 2008. They studied ocean currents as well as the distribution of temperature, salt content and trace substances in Antarctic sea water. "We want to investigate the role of the Southern Ocean for past, present and future climate," chief scientist Fahrbach said. The sinking water masses in the Southern Ocean are part of the overturning in this region and thus play a major role in global climate. "While the last Arctic summer was the warmest on record, we had a cold summer with a sea-ice maximum in the Antarctic. The expedition shall form the basis for understanding the opposing developments in the Arctic and in the Antarctic," Fahrbach said.

In the frame of the GEOTRACES project the scientists found the smallest iron concentrations ever measured in the ocean. As iron is an essential trace element for algal growth, and algae assimilate CO2 from the air, the concentration of iron is an important parameter against the background of the discussion to what extent the oceans may act as a carbon sink.

As the oceanic changes only become visible after several years and also differ spatially, the data achieved during the Polarstern expeditions are not sufficient to discern long-term developments. The data gap can only be closed with the aid of autonomous observing systems, moored at the seafloor or drifting freely, that provide oceanic data for several years. "As a contribution to the Southern Ocean Observation System we deployed, in international cooperation, 18 moored observing stations, and we recovered 20. With a total of 65 floating systems that can also collect data under the sea ice and are active for up to five years we constructed a unique and extensive measuring network," Fahrbach said.

In order to get the public, and especially the young generation, interested in science and research and to sensitise them for environmental processes, two teachers were on board Polarstern. Both took an active part in research work and communicated their experiences to pupils, colleagues and the media via internet and telephone. "We will bring home many impressions from this expedition, and we will be able to provide a lively picture of the polar regions and their impact on the whole earth to the pupils," Charlotte Lohse, teacher at the Heisenberg-Gymnasium in Hamburg, and Stefan Theisen from the Free Waldorf School in Kiel said.

Please send us a copy of any published version of this document.

The Alfred Wegener Institute for Polar and Marine Research (AWI) conducts research in the Arctic, Antarctic and in oceans of mid and high latitudes. The AWI coordinates polar research in Germany, and provides important infrastructure, such as the research icebreaker Polarstern and stations in the Arctic and Antarctic, for international science organisations. The AWI is one of 15 research centres of the 'Helmholtz-Gemeinschaft' (Helmholtz Association), the largest scientific organisation in Germany.

In the International Polar Year more than 50,000 scientists from over 60 countries investigate the polar regions. It is their aim to investigate the role of the Arctic and the Antarctic with regard to the Earth's climate and ecosystems. Germany has very good preconditions for research in the Arctic and in the Antarctic, having the worldwide most efficient research icebreaker Polarstern, several polar stations and two polar planes. In particular, Germany can contribute to the key issues: polar regions and climate change, shifting continents, venture into unknown regions, and development of innovative technologies.

<
The ultra-clean water sampler on its way out of the water. This device is developed by NIOZ and is u ...
Photo: Ismael Nunez-Riboni / Alfred-Wegener-Institut
None

A CTD is measuring conductivity, temperature and salinity in different ocean depths. 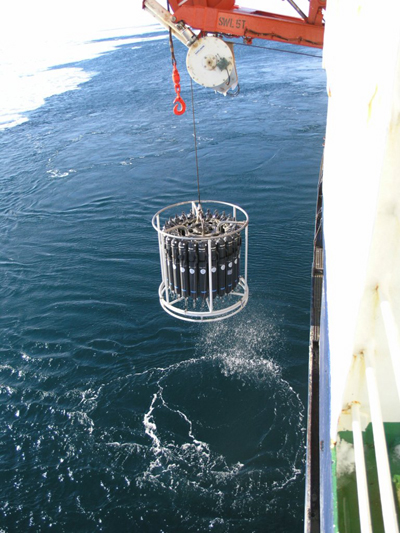 The ultra-clean water sampler on its way out of the water. This device is developed by NIOZ and is used in the framework of the GEOTRACES project to measure iron concentrations. 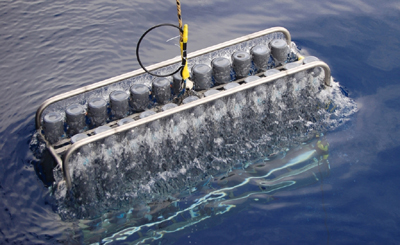