Home > Pressemitteilung: Fire Under the Ice

Fire Under the Ice

An international team of researchers was able to provide evidence of explosive volcanism in the deeps of the ice-covered Arctic Ocean for the first time. Researchers from an expedition to the Gakkel Ridge, led by the American Woods Hole Oceanographic Institution (WHOI), report in the current issue of the journal Nature that they discovered, with a specially developed camera, extensive layers of volcanic ash on the seafloor, which indicates a gigantic volcanic eruption.

"Explosive volcanic eruptions on land are nothing unusual and pose a great threat for whole areas," explains Dr Vera Schlindwein of the Alfred Wegener Institute for Polar and Marine Research in the Helmholtz Association. She participated in the expedition as a geophysicist and has been, together with her team, examining the earthquake activity of the Arctic Ocean for many years. "The Vesuvius erupted in 79 AD and buried thriving Pompeii under a layer of ash and pumice. Far away in the Arctic Ocean, at 85° N 85° E, a similarly violent volcanic eruption happened almost undetected in 1999 - in this case, however, under a water layer of 4,000 m thickness." So far, researchers have assumed that explosive volcanism cannot happen in water depths exceeding 3 kilometres because of high ambient pressure. "These are the first pyroclastic deposits we've ever found in such deep water, at oppressive pressures that inhibit the formation of steam, and many people thought this was not possible," says Robert Reves-Sohn, staff member of the WHOI and lead scientist of the expedition carried out on the Swedish icebreaker Oden in 2007.

A major part of Earth's volcanism happens at the so-called mid-ocean ridges and, therefore, completely undetected on the seafloor. There, the continental plates drift apart; liquid magma intrudes into the gap and constantly forms new seafloor through countless volcanic eruptions. Accompanied by smaller earthquakes, which go unregistered on land, lava flows onto the seafloor. These unspectacular eruptions usually last for only a few days or weeks.

The Gakkel Ridge in the Arctic Ocean spreads so slowly at 6-14 mm/year, that current theories considered volcanism unlikely - until a series of 300 strong earthquakes over a period of eight months indicated an eruption at 85° N 85° E in 4 kilometres water depth in 1999. Scientists of the Alfred Wegener Institute became aware of this earthquake swarm and reported about its unusual properties in the periodical EOS in the year 2000.

Vera Schlindwein and her junior research group are closely examining the earthquake activity of these ultraslow-spreading ridges since 2006. "The Gakkel Ridge is covered with sea-ice the whole year. To detect little earthquakes, which accompany geological processes, we have to deploy our seismometers on drifting ice floes." This unusual measuring method proved highly successful: in a first test in the summer 2001 - during the "Arctic Mid-Ocean Ridge Expedition (AMORE)" on the research icebreaker Polarstern - the seismometers recorded explosive sounds by the minute, which originated from the seafloor of the volcanic region. "This was a rare and random recording of a submarine eruption in close proximity," says Schlindwein. "I postulated in 2001 that the volcano is still active. However, it seemed highly improbable to me that the recorded sounds originated from an explosive volcanic eruption, because of the water depth of 4 kilometres."

The scientist regards the matter differently after her participation in the Oden-Expedition 2007, during which systematic earthquake measurements were taken by Schlindwein's team in the active volcanic region: "Our endeavours now concentrate on reconstructing and understanding the explosive volcanic episodes from 1999 and 2001 by means of the accompanying earthquakes. We want to know, which geological features led to a gas pressure so high that it even enabled an explosive eruption in these water depths." Like Robert Reves-Sohn, she presumes that explosive eruptions are far more common in the scarcely explored ultraslow-spreading ridges than presumed so far.

The Alfred Wegener Institute carries out research in the Arctic and Antarctic as well as in the high and mid latitude oceans. The institute coordinates German polar research and makes available to international science important infrastructure, e.g. the research icebreaker "Polarstern" and research stations in the Arctic and Antarctic. AWI is one of 15 research centres within the Helmholtz-Association, Germany's largest scientific organization.

<
Volcanic ashes on the sea bed of Gakkel Ridge
©WHOI
None

Volcanic ashes on the sea bed of Gakkel Ridge 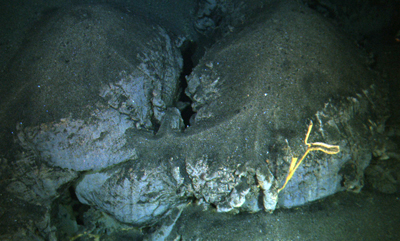