The newly described skull of the oldest woolly rhinoceros in Europe shows that these giant creatures - with two impressively large horns on their foreheads - once roamed across central Germany. The large shaggy mammals grazed at the foot of the Kyffhäuser range, whose unforested, rocky slopes loomed out of the broad, bleak plains of northern Thuringia 460,000 years ago. The climate at this time was icy cold and far drier than today.

At the time, the brow of a glacier existed only a few kilometres away, which expanded during the Elsterian ice age from Scandinavia towards the southwest and spread across the monotonous grassland. But well adapted creatures such as mammoths, reindeer, musk ox and other cold climate animals were able to survive in what was known as the mammoth steppe and found suitable food sources here. The uniform type of vegetation that emerged under these particular climatic conditions once stretched from the coasts of the Arctic Ocean to the Pacific and extended as far as central Europe in the west.

"This is the oldest woolly rhinoceros found in Europe, and it gives us a precise date for the first appearance of cold climate animals spreading throughout Asia and Europe during the ice ages. The characteristic species of mammals emerged together and across the continent", is how palaeontologist Ralf-Dietrich Kahlke explains the finding's significance.

The skull was discovered more than a century ago in a gravel pit at the foot of the Kyffhäuser range near Bad Frankenhausen, but it was found as more than 50 fragments. These have only now been pieced together at Weimar's Senckenberg Research Institute to make this the most complete Coelodonta tologoijensis in the world. The reconstructed specimen provides the first evidence that this woolly rhinoceros species had advanced into Europe even before the first glacial stage. The animal was around 12 years old when its life ended about 460,000 years ago. It died in a melt-water delta flowing off the inland glacier that had advanced southwest as far as central Germany.

The ancestors of this large ice age mammal evolved around two million years earlier in the northern foothills of the Himalayas. For a long time Coelodonta lived exclusively in an area of central China around 6,000 kilometres away and east of Lake Baikal. The prevailing conditions at the time were marked by a continental dry climate and extreme seasonal temperature fluctuations, so the central Asian ancestors of the Bad Frankenhausen woolly rhinoceros were adapted to foraging for meagre steppe food and very well equipped for the winter cold.

The recently published Senckenberg study of the oldest rhinoceros from the central European mammoth steppe, by Ralf-Dietrich Kahlke and Frédéric Lacombat, found that woolly rhinoceroses continued to adapt to meet the conditions they experience throughout many millennia. The 'original' diet of Coelodonta two million years earlier was rather mixed, including the leaves of shrubs and trees, but as the landscape was increasingly desertified by changing climatic conditions the animals became prime specialists in browsing for steppe food growing lower down on the ground. "Analysis of the Frankenhausen specimen shows that Coelodonta tologoijensis carried its head low along the ground and had a lawnmower-like mouth with a huge set of grinding teeth. As the climate became colder, these animals became more efficient at utilising the available food ", says Ralf-Dietrich Kahlke.

Kahlke, who is Head of the Weimar Department of Quaternary Palaeontology, and his co-author Frédéric Lacombat have investigated a number of woolly rhinoceros skulls from Asia and Europe. The facet-like stress marks on the impressively large frontal horns retrieved from permafrost soils show that the animals' status symbol was not only used as a weapon against other great ice age fauna but was also used in ingesting food.

1. The paper, Kahlke, R. -D., Lacombat, F.: "The earliest immigration of woolly rhinoceros (Coelodonta tologoijensis, Rhinocerotidae, Mammalia) into Europe and its adaptive evolution in Palaearctic cold stage mammal faunas" is published in Quarternary Science Review, Volume 27, November 2008 -
Copies of the paper can be obtained on request from Doris von Eiff (details below).

2. Dr. habil. Ralf-Dietrich Kahlke is Palaeontologist and Head of the Weimar Department for Quarternary Palaeontology, which is a branch of the Frankfurt Senckenberg Research Institute and Natural History Museum. - Dr. Frédéric Lacombat (Musée Crozatier in Le Puy-en Velay, France) worked as postdoc-student at the Weimar department.

3. Larger images of the these and other pictures can be obtained from Doris von Eiff (details below). - A reference to the copyright is obligatory.

4. The skull of Coelodonta tologoijensis belongs to the Weimar collections.

<
Coelodonta tologoijensis, skull from the gravel pit at the foot of the Kyffhäuser range
© Senckenberg Research Institute
None

<
Coelodonta tologoijensis, skull from the gravel pit at the foot of the Kyffhäuser range
© Senckenberg Research Institute
None 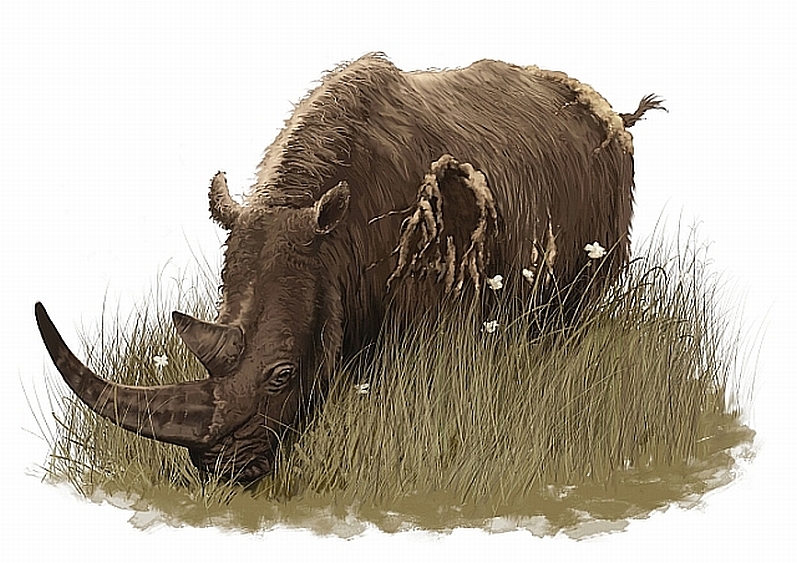 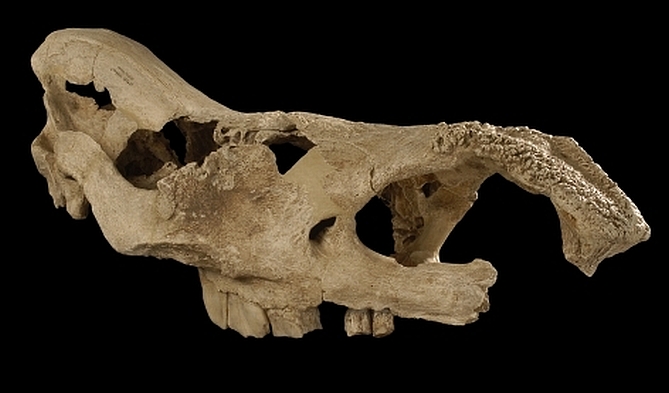