Home > Pressemitteilung: Atomic Nucleus with Halo: For the ...

Atomic Nucleus with Halo: For the First Time, Scientists Measure the Size of a One-Neutron Halo with Lasers

Atomic nuclei are normally compact structures defined by a sharp border. About twenty-five years ago, it was discovered at the University of California in Berkeley that there are exceptions to this picture: Certain exotic atomic nuclei contain particles that shear off from the central core and create a cloud, which surrounds the central core like a 'heiligenschein' or halo. An example of such a halo occurs in beryllium-11, a specific isotope of the metal beryllium. Here, the halo is made up of a single neutron. For the first time ever, scientists at the Institute of Nuclear Chemistry of the Johannes Gutenberg University Mainz in cooperation with colleagues from other institutes have succeeded in precisely measuring this one-neutron halo by means of a laser, and in evaluating the dimensions of the cloud. By studying neutron halos, scientists hope to gain further understanding of the forces within the atomic nucleus that bind atoms together, taking into account the fact that the degree of displacement of halo neutrons from the atomic nuclear core is incompatible with the concepts of classical nuclear physics.
"We intuitively imagine the atomic nucleus as a compact sphere consisting of positively charged protons and uncharged neutrons," explains Dr Wilfried Nörtershäuser of the Institute of Nuclear Chemistry. "In fact, we have known since the 1980s that atomic nuclei of certain neutron-rich isotopes of the lightest elements - lithium, helium and beryllium - completely contradict this conception." These isotopes consist of a compact nuclear core and a cloud made of diluted nuclear material - called 'heiligenschein' or 'halo'. A halo consists mostly of neutrons that are very weakly bound to the nuclear core, "normally with only one-tenth of the usual binding energy of a neutron inside the core," explains Nörtershäuser.

The discovery of these exotic atomic nuclei created a new area of research, which Nörtershäuser as the head of a young investigators group funded by the German Helmholtz Association has pursued since 2005 at the University in Mainz and at the GSI Helmholtz Center for Heavy Ion Research in Darmstadt. Measuring halo nuclei is extremely difficult, since they can only be artificially created in minute amounts. In addition, these synthesized nuclei decay within seconds, mostly even in milliseconds.

Nörtershäuser's team has now succeeded for the first time in measuring the nuclear charge radius in beryllium-11. This nucleus consists of a dense core with 4 protons and 6 neutrons and a single weakly bound neutron that forms the halo. In order to accomplish this ultra-precise laser spectroscopic measurement, the scientists used a method developed 30 years ago at the University of Mainz, but combined it now for the first time with the most modern techniques for precise laser frequency measurement, i.e., by employing an optical frequency comb. This combination alone was not sufficient, though. Only by further expanding the method using an additional laser system it was possible to achieve the right level of precision. The technique was then applied to beryllium isotopes at the Isotope Separator On Line (ISOLDE) facility for radioactive ion beams at the European Organization for Nuclear Research (CERN) in Geneva. The professional journal Physical Review Letters published this work in its latest February 13 issue.

The measurements revealed that the average distance between the halo neutrons and the dense core of the nucleus is 7 femtometers. Thus, the halo neutron is about three times as far from the dense core as is the outermost proton, since the core itself has a radius of only 2.5 femtometers. "This is an impressive direct demonstration of the halo character of this isotope. It is interesting that the halo neutron is thus much farther from the other nucleons than would be permissible according to the effective range of strong nuclear forces in the classical model," explains Nörtershäuser. The strong interaction that holds atoms together can only extend to a distance of between 2 to 3 femtometers. The riddle as to how the halo neutron can exist at such a great distance from the core nucleus can only be resolved by means of the principles of quantum mechanics: In this model, the neutron must be characterized in terms of a so-called wave function. Because of the low binding energy, the wave function only falls off very slowly with increasing distance from the core. Thus, it is highly likely that the neutron can expand into classically forbidden distances, thereby inducing the expansive 'heiligenschein'.

This work was supported by the Helmholtz Association, the GSI Darmstadt and the Federal Ministry of Education and Research (BMBF). 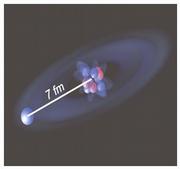 <
The 'halo' nucleus 11Be consists of a core of 10Be and loosely bound neutron. The neutron orbits at ...
illustration: Dirk Tiedemann, Institute of Nuclear Chemistry
None

The 'halo' nucleus 11Be consists of a core of 10Be and loosely bound neutron. The neutron orbits at a mean distance of 7 fm from the center-of-mass. 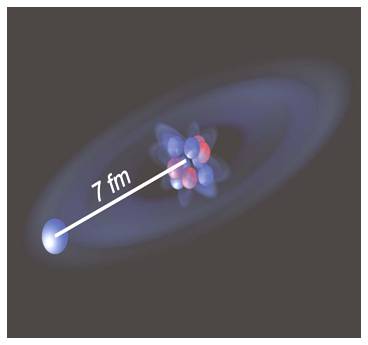