Predicting the ocean's role for global climate requires a profound understanding of the cycling of matter in the sea. Regarding nitrogen losses, scientists were apparently off the mark. A novel study reveals the complex interactions in the nitrogen cycle of the Eastern Tropical South Pacific oxgen minimum zone.

Induced by global warming, regions of oxygen-poor water - so-called oxgen minimum zones - are expanding in the world's oceans. That has significant consequences on the marine habitat and fisheries, as higher organisms avoid these regions. The global elemental cycles of carbon and nitrogen are closely linked to oxgen minimum zones. Therefore, detailed knowledge of these cycles is essential for predicting the effects of climate change on the oceans as well as possible feedback mechanisms. A study by an international group of scientists around Phyllis Lam from the Max-Planck-Institute for Marine Microbiolgy in Bremen, Germany, published in the journal "PNAS", brings us a big step closer to this understanding.

The scientists concentrated on the nitrogen cycle of the Peruvian oxgen minimum zone in the eastern Tropical South Pacific. This region is one out of three regoins in the world's oceans where nitrogen escapes from seawater. "For a long time, this loss was attributed to denitrification, which transforms nitrate to gaseous nitrogen, which can then escape to the atmosphere", Lam explains. "This picture is changing: Apparently, the so-called anammox-bacteria are responsible for the major part of the lost nitrogen. However, up to now it has been unclear where the anammox-bacteria obtain their resources for this transformation." Moreover, the lack of denitrification strongly questions our understanding of the closely-linked carbon cycle - if not by denitrification, how else is organic matter degraded in these oxygen-depleted waters?

Lam's results shake the previous assumptions about the nitrogen cycle in the Peruvian oxygen minimum zone. Experiments as well as molecular analyses show that several processes (presenting the layman with quite some technical terms) are involved (Fig. 1): The major proportion of nitrogen is indeed lost through Anammox. It is directly coupled to nitrate reduction and aerobic ammonia oxidation (the first step of nitrification) for sources of NO2-. The NH4+ required by anammox originates from dissimilatory nitrate reduction (DNRA) and remineralization of organic matter via nitrate reduction and likely microaerobic respiration. The importance of the single processes varies between shelf and open ocean settings as well as the depth layers of the OMZ. Besides, the finding of DNRA itself is also surprising, because up till now, it has generally been considered insignificant in the open ocean.

Therewith, Lam and her colleagues challenge the prevailing opinion that nitrate from the deep sea is responsible for all the nitrogen losses from the Ocean. Its fraction sums up to only about 50 percent, while the remaining losses were attributed to remineralized nitrogen (originating from organic material).

Hitherto existing calculations of nitrogen losses, relying only on measurements of the nitrate deficit, may therefore have substantially underestimated the effective losses from the Ocean - particularly if the same applies to the other OMZs in the world. "Especially the role of remineralized nitrogen needs to be reconsidered". Lam points out, "That is the only way to enable reliable predictions about the future role of the oceans for global climate."

All lives on Earth depend on nitrogen, as it is essential for the making of cell components such as proteins and DNA. However, organisms can't use all forms of nitrogen, therefore only a part of the nitrogen present in the ocean determines the productivity of the whole ecosystem. The conversion of different forms of nitrogen is carried out by specialized microorganisms.

In the ocean, nitrogen in the form of ammonium (NH4+) is mainly set free by the degradation of organic matter. In a central step known as nitrification, ammonium is being transferred to nitrite (NO2-) and subsequently to nitrate (NO3-). This process consumes oxygen. With several intermediate steps, the nitrate is subsequently transformed to elemental nitrogen (gaseous nitrogen, N2) in the absence of oxygen. This reaction is termed denitrification. All transformations are mediated by microorganisms. The gaseous N2 bubbles up and leaves the ocean. A few years ago, scientists at the Max Planck Institute in Bremen discovered the process of anaerobic oxidation of ammonium (ANAMMOX) in the oceans. In this process, anammox-bacteria transform ammonium directly with nitrite to gaseous nitrogen (N2) under oxygen-free conditions.

The Oxgen Minimum Zone (OMZ) is an oxygen-depleted layer of water, usually in 200 to 1000 m water depth. Although oxygen minimum zone waters constitute only about 0.1% of the total ocean volume in the world, 20-40% of total oceanic nitrogen loss is estimated to occur therein.

For their analyses, Lam and her colleagues used the stable isotope of nitrogen (15N), allowing them to trace single transformations in high detail. Furthermore, they analysed the parallel gene expression - that is, when organisms are signalling their cell machineries to build the required enzymes.

or the MPI press officers:

<
Anammox (yellow) has been found to be the predominant nitrogen loss pathway and was directly coupled ...
(Source: Phyllis Lam, MPI; published in PNAS)
None

Anammox (yellow) has been found to be the predominant nitrogen loss pathway and was directly coupled to nitrate reduction (red) and aerobic ammonia oxidation (green) for sources of NO2-. The NH4+ required by anammox originated from DNRA (blue) and remineralization of organic matter via nitrate reduction and likely microaerobic respiration. Microaerobic conditions at least in the upper part of the OMZ were implicated by the occurrence of nitrification, which diminishes in importance from shelf to open ocean as well as deeper into the lower OMZ. In contrast, NH4+ production due to nitrate reduction and DNRA became increasingly important in the lower OMZ and offshore. 'Assim.' and 'Remin.' stand for assimilation (grey) and remineralization (brown) respectively. Nitrogen fixation (grey dashed) might be spatially coupled to nitrogen loss near the OMZ but has not been assessed in this study. 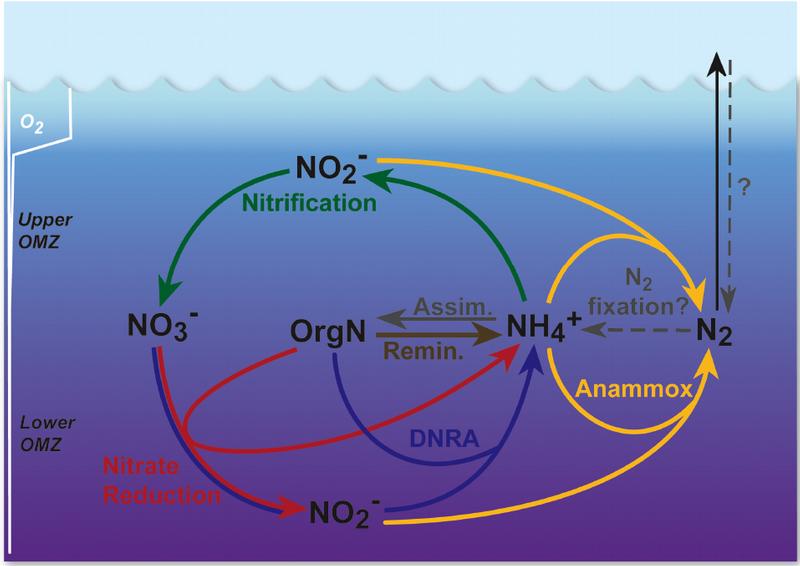 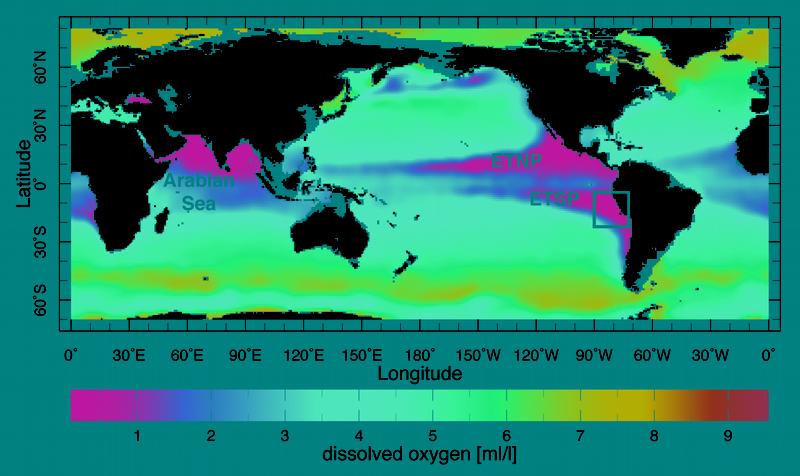