Primate researchers have identified a new species of gibbon living in the tropical rain forests between Vietnam, Laos and Cambodia

Göttingen/Germany, Vietnam, September 21, 2010. Scientists from the German Primate Center (DPZ) in Göttingen have identified a new species: the northern buffed-cheeked gibbon, Nomascus annamensis. Researchers were able to identify it through its characteristic vocalizations. An analysis of the frequency and tempo of their calls, along with genetic research, show that this is, in fact, a new species. Crested gibbons, a monogamous species that live in the tree tops of tropical jungles, are among the most endangered primate species in the world. Knowledge of their biology and distribution is of great importance for their conservation (Vietnamese Journal of Primatology 1(4), 2010).

Unusual songs resonate early in the morning through the tropical jungle. Van Ngoc Thinh, a doctoral student at Göttingen’s primate center, is out and in an inhospitable and mountainous area lying between Vietnam, Laos and Cambodia in order to record the calls of crested gibbons. These primates, who live high up in the canopy, are as yet largely unexplored, though scientists suspect their song serves to defend territory or might even be a precursor of the music humans make. But Van Ngoc Thinh is interested far less in pair-bonding than in the evolution and biology of crested gibbons. He can differentiate between different species and even identify individuals by the frequency and tempo of their calls.
Gibbons, like orangutans, gorillas, chimpanzees and bonobos belong to the apes, our closest relatives. Due to their smaller size, however, gibbons are also called lesser apes. A distinction is made between four genera of gibbons, of which the crested gibbons, with their characteristic “punk hairdo,” are the most eye-catching. Male and female animals look quite different. While the females show an orange-yellow pelt, adult males are black and have the characteristic crest. In addition, some species have light-colored cheeks. What they all have in common are long arms and the ability to brachiate, that is, to swing with great accuracy and over considerable distances from branch to branch.

Crested gibbons are only found in Vietnam, Laos, Cambodia and southern China. Until now, it has been assumed that there are six different species, their territories separated by rivers. The German-American-Vietnamese research team led by Christian Roos has now been able to identify a seventh species.

Determining gibbon species is particularly difficult, as they live high up in the canopy. Small differences in their coloration are nearly impossible to make out from below, and tranquilizing them for identification purposes is out of the question, as these endangered animals would not survive a fall from such a great height. “Instead, we collected the droppings from the animals in order to read the genetic information available in their intestinal cells,” says Christian Roos, describing the arduous fieldwork in the jungle. These data were augmented by a genetic analysis of the animals displayed in museums. The sound recordings provided an additional, valuable source of information. From all this data, the team was able to demonstrate that the southern white-cheeked gibbon Nomascus siki was not one species but two: the newly identified northern buffed-cheeked gibbon and the southern white-cheeked gibbon. The two species are separated from each other by the Banghiang and Thach Han Rivers.

“The discovery of a new species of ape is a minor sensation”, Christian Roos says. All crested gibbon species are endangered or critically endangered. Scientists assume only about 20 Hainan gibbons still survive, making them the rarest and most critically endangered primate in the world. Other species and subspecies are similarly endangered, and some have populations of only around a hundred animals. One reason for their sharp decline is illegal hunting. Gibbons are kept as cute pets, or they are eaten, or they are processed into traditional medicines. A further major threat is the increasing loss of their habitat by forest clearing to make way for farming, or to establish rubber, coffee and cashew plantations, or to mine gold or make charcoal, or simply for the timber. “Knowledge of their biology and exact distributions is essential for effectively protecting the animals,” Christian Roos says. “Only if we know where which species is found and how many individuals there are can we start with serious conservation actions.”

The gibbon is the fourteenth species of primate discovered and described by the Biodiversity of Primates Network, a collaborative effort by scientists at the German Primate Center. A list of species can be found at http://dpz.eu/species; it includes the silvery lutung, found in Asia, and various lemurs that live in Madagascar.

Printable images and audio material can be obtained from the press and public relations office. Please send us a copy of your own publication.

The German Primate Center (DPZ) in Göttingen, Germany, engages in basic research on and with primates in the areas of organismic biology, infectious diseases, and neurosciences. In addition, it operates four field stations abroad and is a Competence and Reference Center for primate research. The DPZ is one of the 86 Leibnitz Association research and service institutions in Germany (http://www.wgl.de/).

Northern buffed-cheeked gibbon males have a black pelt that shimmers silver in sunlight. The chest is brownish in colour, the cheeks are deep orange-golden. The crest is very prominent. 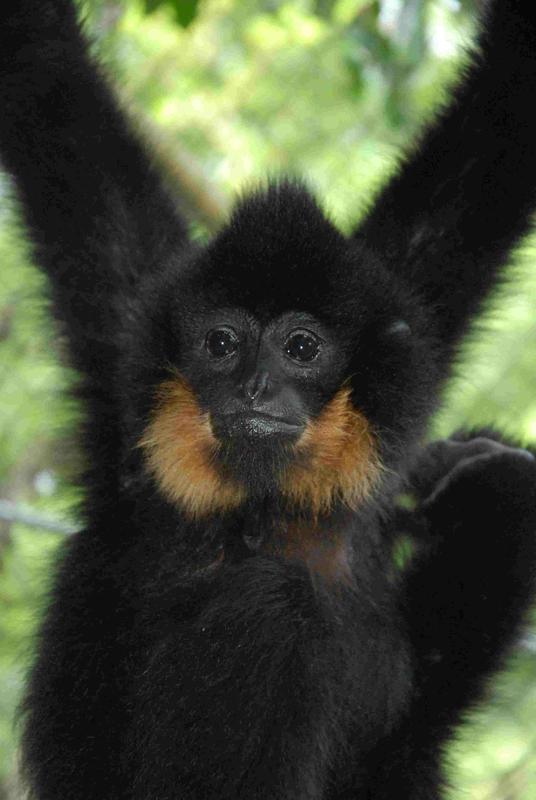 Females are orange-beige in color. They lack the characteristic crest. 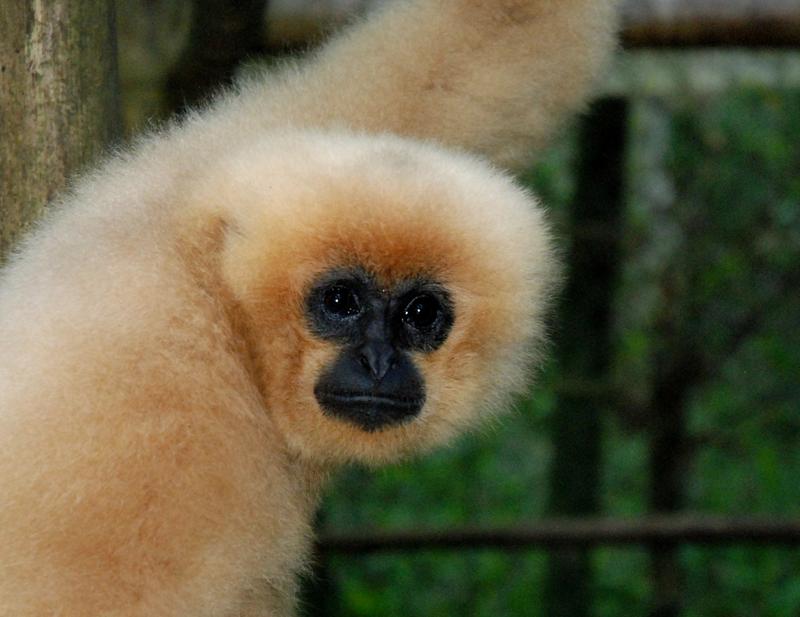