Home > Pressemitteilung: Successful hunt for asteroids in the ...

Successful hunt for asteroids in the classroom

For the past few months, the Pan-STARRS 1 telescope, designed to become the world’s most powerful asteroid hunter, teamed up with school children from the USA and Germany to discover and study asteroids – clumps of rock, between a few and a few hundred kilometers in size, that cruise through our Solar System. At the close of the campaign, which was coordinated by the International Astronomical Search Collaboration, the students can look back on exciting eight weeks of asteroid search, which included the confirmation of four “Near-Earth Objects” (asteroids passing relatively close to Earth) and the discovery of what could turn out to be more than 170 previously undiscovered asteroids.

As the 1.8 meter (60 inch) Pan-STARRS 1 telescope (PS1), one of the most powerful current survey telescopes, scans the night sky, its 1400 Megapixel digital camera takes more than 500 exposures per night. Between October 25 and December 21, 2010, some of this data found its way into classrooms in the USA and in Germany, where high-school students have used it to track known asteroids, and also to discover candidate objects that could be previously unknown asteroids. When Hawaiian skies were overcast, schools also received data taken with a telescope operated by the Astronomical Research Institute (ARI) in Westfield, Illinois.

Over the Internet, the participating schools received series of astronomical images. Each series included images of one specific region of the sky, taken an hour apart. During this hour, the image of a main belt asteroid would have moved noticeably (in the images in question: about 100 pixels) relative to the distant background stars. The students examined the images for exactly this kind of position change, carefully sorting image artifacts from moving celestial objects, and reported back to the International Astronomical Search Collaboration, whose volunteers then checked the results and arranged for follow-up observations.

Some of the most interesting student observations during the project concerned “Near-Earth Objects” (NEO), asteroids or similar objects whose orbits bring them into the inner Solar System. Some NEOs might turn out to be potential “killer asteroids” that are bound to collide with our home planet; finding these is one main goal of the PS1 telescope. In order to keep track of NEOs, at least two separate observations at different times are required. Katharina Stöckler (age 17), an 11th grade student at Gymnasium Neckargemünd near Heidelberg, explains: “We obtained a ‘NEO confirmation’ for the asteroid 2010 UR7 – the second observation ever made of that object, which confirmed the asteroid’s existence and gave crucial information about its orbit.” Three additional such “NEO confirmations” were made during the project; in addition, 64 of the students' observations amounted to the third or fourth time a specific NEO had been observed. All these observations provide important additional data to scientists studying the motion of NEOs.

In the course of the project, the students also observed 151 candidate objects in the Pan-STARRS data (plus an additional 20 candidates in the ARI/Westfield telescope data) that could be newly discovered main belt asteroids, which orbit the Sun between the orbits of Mars and Jupiter. In one case, students from Benedikt Stattler Gymnasium, a high-school in Bavaria, Germany, discovered 7 such candidate objects in a single night! Before the students' finds are confirmed as discoveries, however, and assigned provisional designation numbers, they will need to be observed again – for a number of the candidates, this is going to prove impossible; on the other hand, some are likely to turn out to have been previously known, after all. Once a newly found object has been observed over at least a whole orbit (which typically lasts 3 to 6 years), it is assigned a definite numerical identifier, and can also be given a proper name.

IASC director Dr. Patrick Miller, of Hardin-Simmons University in Abilene, Texas, says: “Pan-STARRS images contain an amazing amount of data, providing students with opportunities for literally hundreds of new discoveries. With this amount of data, we could expand our campaign to a thousand schools a year, and tens of thousands of students, which is very exciting, and is an unbelievable opportunity for high schools and colleges!”

Pan-STARRS Project Manager Dr. William Burgett adds: "It is incredibly exciting that we can use a state-of-the-art system such as Pan-STARRS to allow students around the world to learn astronomy with real research quality images. We are committed to making this a valuable and enjoyable experience for both the students and their teachers, and we hope this is only the first step in eventually involving hundreds of schools around the world."

The Pan-STARRS-IASC campaign uses data obtained with the Pan-STARRS 1 (PS1) telescope, a 1.8 meter (60-inch) diameter telescope on Haleakala, Hawaii, designed to automatically search the skies for objects that either move or change their brightness from night to night. It features the world’s largest digital camera, a specialized astronomical camera with 1,400 megapixels; each night Pan-STARRS collects about 1,000 DVDs' worth of data. Over the next three years, PS1 is expected to discover about 100,000 asteroids and to determine if any of them are on a collision course with Earth. It will catalog five billion stars and 500 million galaxies. PS1 will also be used to compile the most comprehensive digital map of the 75 percent of the universe visible from Hawaii. PS1 is the experimental prototype for the larger PS4 telescope, which will have four times the power of PS1 and is planned for Mauna Kea.

The International Astronomical Search Collaboration (IASC, pronounced “Isaac”) is an educational outreach program for high schools and colleges, provided at no cost to the participating schools. Since the program’s foundation in fall 2006, more than 200 schools – thousands of students – per year have participated in its search campaigns, representing more than 30 countries on five continents. Over the Internet, the schools receive astronomical images taken only hours before. Students then use the software package Astrometrica to search for, discover, and measure the properties of asteroids. Overall, students have discovered more than 300 previously unknown asteroids, seven of which have received an official number and been cataloged by the Minor Planet Center at Harvard, the body in charge of keeping track of asteroid designations. (As the official numbering can take 5-10 years from the date of discovery, this number is bound to increase rapidly.) Students have also performed thousands of measurements of near-Earth objects, which pose a possible impact hazard with Earth. Centered at Hardin-Simmons University (Abilene, Texas), IASC is a collaboration of the University, Lawrence Hall of Science (University of California at Berkeley), Astronomical Research Institute (Westfield, Illinois), Global Hands-On Universe Association (Lisbon, Portugal), Tarleton State University (Stephenville, Texas), Sierra Stars Observatory Network (Markleeville, California), and Astrometrica (Linz, Austria). The present campaign builds on the Global Hands-on Universe (GHOU) collaboration. GHOU is an educational program that enables students to investigate the Universe while applying tools and concepts from science, math, and technology. GHOU has reached about 30 nations, and trained approximately 5000 teachers around the world in techniques and the use of modern astronomy in classrooms.

The German schools of the Pan-STARRS-IASC search campaign are coordinated and supported by the Center for Astronomy Education and Outreach (Haus der Astronomie) in Heidelberg (in collaboration with the Max Planck Institute for Astronomy in Heidelberg and the Starkenburg-Sternwarte Heppenheim), the Max Planck Institute for Extraterrestrial Physics in Garching, and the Technical University Munich.

The participating international teams of schools are:

The Pan-STARRS Project is being led by the Institute for Astronomy, of the University of Hawaii and exploits the unique combination of superb observing sites and technical and scientific expertise available in Hawai’i. Funding for the development of the observing system has been provided by the US Air Force. The PS1 Surveys have been made possible through contributions of the Institute for Astronomy, the University of Hawai’i, the Pan-STARRS Project Office, the Max-Planck Society and its participating institutes, the Max Planck Institute for Astronomy, Heidelberg and the Max Planck Institute for Extraterrestrial Physics, Garching, The Johns Hopkins University, the University of Durham, the University of Edinburgh, the Queen’s University Belfast, the Harvard-Smithsonian Center for Astrophysics, and the Los Cumbres Observatory Global Telescope Network, Incorporated, and the National Central University of Taiwan and the National Aeronautics and Space Administration under Grant No. NNX08AR22G issued through the Planetary Science Division of the NASA Science Mission Directorate. Any opinions, findings, and conclusions or recommendations
expressed in this press release are those of the author(s), and do not necessarily reflect the views of the National Aeronautics and Space Administration.

NEO Confirmations (second observation of a specific Near-Earth Object; listed are the object identifier, the observing school, and the observation date):

The 1.8 meter diameter of the PS1 mirror corresponds to 71 inches, not 60 inches. Hooray for basic arithmetic.

<
The PS1 telescope on Hawaii
Image credit: Rob Ratkowski
None

The PS1 telescope on Hawaii 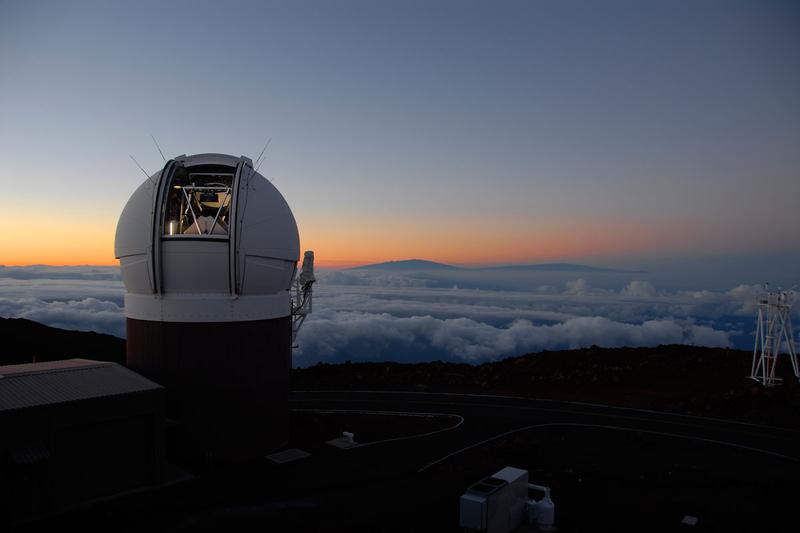