Home > Pressemitteilung: How Bees Learn Which Odors to Follow

Scientists at Freie Universität Berlin and the Bernstein Center Berlin have traced odor memory to a certain area of the bee brain.

How successful bees are in their search for food depends largely on how well they can, based on their odors, detect nectar-rich flowers from a distance and distinguish them from less promising plants. Researchers around Professor Randolf Menzel, a neurobiologist at Freie Universität’s Department of Biology, Chemistry, and Pharmacy, investigated how and whether bees can recognize a relationship between the odor and nectar of a particular flower and whether this association is localized in a certain area of the bee brain. The work was supported by the German Federal Ministry of Education and Research as part of the projects of Bernstein Center Berlin and Bernstein Focus Learning: Memory and Decision Making.

The researchers caught nectar-collecting bees when they were about to swarm out from their hive, and “sent them to school” in their lab. The curriculum contained five different artificial fragrances. First, the bees were introduced to all five odors. Then, in a learning phase, one of the odors was always followed by presentation of a drop of sugar solution, while another odor went unrewarded. This form of classical Pavlovian conditioning is based on the proboscis extension reflex, which is elicited when the bees’ antennas get into contact with sweet liquids. The bees quickly learned to extend their probosces and collect the sugar solution whenever the rewarded odor was presented. This response was faithfully maintained for three hours after learning.

To investigate the neural basis of this memory process, as part of his dissertation at Freie Universität, the biologist Martin Strube-Bloss, currently at the Max Planck Institute for Chemical Ecology in Jena, measured electrical reactions of certain nerve cells, namely the output neurons in the mushroom bodies of the bee brain, which had already been raised as candidates for learning. The result was surprising. During the learning phase, the activities in the neurons did not change at all. But three hours after learning, there was a change: more neurons responded to the rewarded stimulus, and the responses to the rewarded stimulus were stronger. So the researchers had actually found a memory trace. Because of its time delay, they could even conclude that it was not due to the learning process itself or to short-term memory, but that they had rather identified the seat of long-term odor memory.

Mathematical analysis by Martin Nawrot, a computational neurobiologist at Freie Universität Berlin, showed that the memory trace in the mushroom body is extremely reliable. Just 150 milliseconds after presentation of an odor, the researchers could already tell, on the basis of the output neurons of the mushroom body, whether it was the rewarded odor or not. So it seems that the bee could safely rely on this group of neurons in order to tell whether an odor is promising, or – in the wild – which odor it is worthwhile to follow in order to find a nectar-bearing flower.

On the basis of their results, the researchers are now developing a computer model of the bee brain that can associate virtual odors with rewards and is able to make decisions on the basis of what it has learned. In the near future, such artificial brains are then to be applied in biomimetic robots.

The Bernstein Center Berlin is part of the Bernstein Network Computational Neuroscience (NNCN) in Germany. The NNCN was established by the German Federal Ministry of Education and Research with the aim of structurally interconnecting and developing German capacities in the new scientific discipline of computational neuroscience. It was named in honor of the German physiologist Julius Bernstein (1835–1917).

<
Honey bee that extends its proboscis in order to lick up a drop of sugar solution from a pipette.
Photograph: Martin Strube-Bloss
None

Honey bee that extends its proboscis in order to lick up a drop of sugar solution from a pipette. 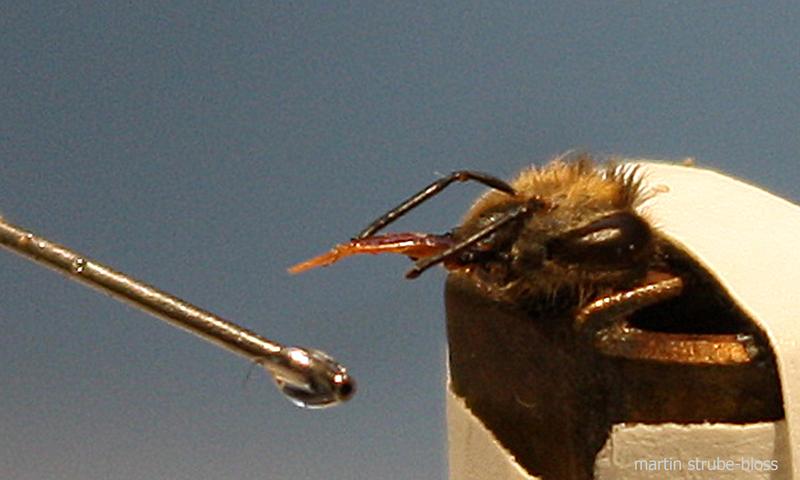