Modern scientists would have loved the sight of early reptiles running across the Bromacker near Tambach-Dietharz (Germany) 300 million years ago. Unfortunately this journey through time is impossible. But due to Dr. Thomas Martens and his team from the Foundation Schloss Friedenstein Gotha numerous skeletons and footprints of early dinosaurs have been found and conserved there during the last forty years. “It is the most important find spot of primitive quadruped vertebrates from the Perm in Europe,“ says Professor Dr. Martin S. Fischer from the University Jena (Germany). The evolutionary biologist and his team together with the Gotha scientists and other partners are now starting a research project not only to analyze the locomotion of these primeval saurians. They also want to set them back into motion – at least in animation. The Volkswagen Foundation (VolkswagenStiftung) will support the project with about 288.000 Euro during the next two years. “Our first major palaeontologic project“, as zoologist Fischer delightedly calls it.

The fossils found on the Bromacker date back to the oldest fully terrestrial vertebrates. These so-called amniotes are the first real “land-dwelling animals”. This became possible through a first evolutionary step in which they laid a completely encapsulated egg in whose ‘watery inside’ the offspring could develop. Therefore tadpoles and gills became redundant. “The Bromacker fossils are the closest relatives of the last mutual ancestor of the amniotes that have been found so far,“ Dr. John A. Nyakatura, who oversees the new research project points out, stressing the evolutionary-biological importance of the finds. How did the locomotion system of those amniotes change? They are according to Nyakatura “pivotal to the genealogical tree for evolutionary biologists”. The Jena expert in locomotion research says the crucial questions of the new project are: “Which functionally anatomical consequences does ‚cutting the cord‘ to water have for the locomotion system of the animals?”

The Jena zoologists and their partners in Gotha, Dresden (both Germany), England and the USA wanted to find out. In their research they cannot only rely on years of expertise but also on one of the fastest X-ray video systems worldwide, which is used at the Friedrich Schiller University. With the help of this system, Dr. Nyakatura and the Paleo-Biomechanist Dr. Vivian Allen who will change from London to Jena in autumn, plan to analyze the locomotion systems of diverse animals resembling the early reptiles. They will observe skinks, tiger salamanders, green iguanas and small crocodiles. In order to do so the animals will move on a treadmill in front of the X-ray video camera that can take up to 2.000 pictures per seconds. Moreover the pressure on the joints will be investigated and footprints will be generated on wet clay. At the end of these analysis a comprehensive locomotion profile of the species is to be created – which in itself will bring science forward.

The protocol of the footprints will then be compared to the primeval footprints, in order to get an understanding of the early saurians movements. “And this in turn will allow conclusions to be drawn about the find spot and what happened there,” Dr. Martens adds. This is only possible because the Gotha researchers could not only recover numerous footprints but also complete skeletons of unique quality. “The fossils are mind-blowing,“ Nyakatura stresses. The entire animal relics encapsulated in stone slabs are being scanned with the help of the TU Dresden in order to create three-dimensional reconstructions of the skeletons. At the end of the project animated studies of the early saurians will be generated from the scans and the locomotion protocols. ”Thanks to the support of the VolkswagenStiftung and the co-operation with the University Jena we will finally be able to give an insight into the world of the early saurians to the visitors of the ‘Museum of Nature’ in Schloss Friedenstein,” says Dr. Martin Eberle, director of the Foundation Schloss Friedenstein Gotha. Now the researchers are hoping their project will be successful so that they cannot only mount an exhibition on the subject in two years’ time. They will also be able to travel 300 million years back in time due to the innovative animations – and they will watch the early reptiles running.

<
The skink next to the fossil skeleton of an early reptile, an Orobates pabsti, that was found at the ...
Photo: Jan-Peter Kasper/FSU
None

<
The skink next to the fossil skeleton of an early reptile, an Orobates pabsti, that was found at the ...
Photo: Jan-Peter Kasper/FSU
None

Skink Emma in the hand of zoologist Dr. John Nyakatura from Jena University. 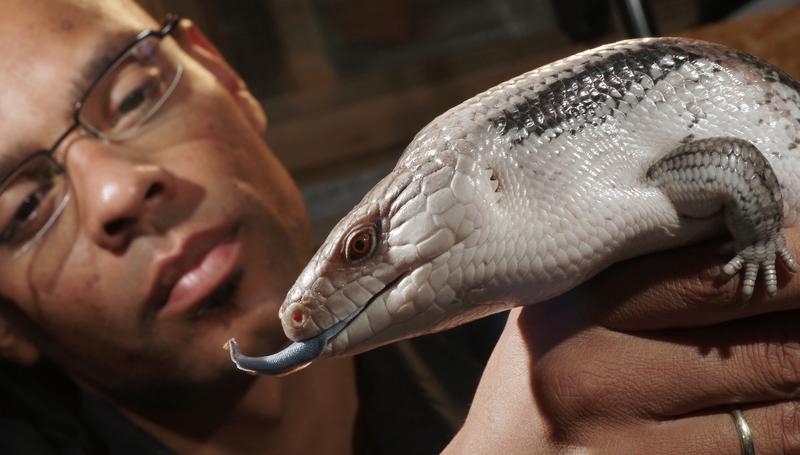 The skink next to the fossil skeleton of an early reptile, an Orobates pabsti, that was found at the Bromacker. 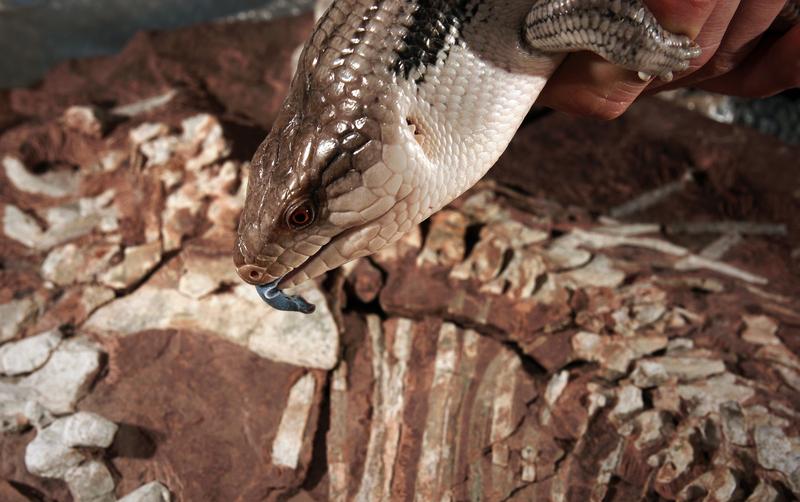