Researchers at the Swedish University of Agricultural Sciences (SLU) in Uppsala, Sweden, have cultivated and classified fungi that had previously been known only through DNA sequences. The fungi, which have lived hidden underground for millions of years, represent a class of fungi that is new to scientists, Archaeorhizomycetes. The findings are being published in the scientific journal Science on August 12.

The fungi now classified are considerably more prevalent in the ground than was previously thought, and they probably occur all over the world, scientists believe. DNA has been identified from about a hundred different species of Archaeorhizomycetes. The findings are based on more than 50 studies from different ecosystems such as pine forests in Sweden, grasslands in California, and tropical rainforests in Costa Rica and Australia.

– I believe it would be difficult to find a soil sample that does not contain these fungi, says Associate Professor Anna Rosling, who led the work at the SLU Department of Forest Mycology and Plant Pathology. Since they are so common in the ground, we assume they play an important role in soil ecosystems, and now that we can cultivate them, we can finally explore what they do.

– It’s not quite clear what their role is, but our findings will be of great importance for how we study the function of fungi in the ecosystem and for our understanding of the evolution of fungi.

Nearly twelve years ago, Anna Rosling and her colleagues took samples of coniferous tree roots in Nyänget outside Umeå in Sweden. They cultivated fungi from these roots, but it was a long time before they realize that the slowly growing, beige-colored culture was a unique species, the first known culture of a mysterious type of new soil fungi.

The species was named by the SLU researchers: Archaeorhizomyces finlayi. The “last name” is after a colleague at the department, Professor Roger Finlay.

– We wanted to recognize his many contributions to the scientific understanding of ground ecosystems, says Anna Rosling.

Others participating in the fungus studies from the SLU department are Associate Professor Audrius Menkis, Associate Professor Björn D. Lindahl, Research Engineer Katarina Ihrmark, and former Postdoctoral Fellow Karelyn Cruz-Martinez. Collaborative partners have been researchers from the University of Michigan in the US, Imperial College in London, England, and the University of Aberdeen in Scotland.

Footnote: Archaeorhizomyces means “primordial root fungus”. The hyphae (= mushroom) are between 1 and 1.5 µm (1000th mm) in diameter. The common size is 3-5 µm but up to 10-15 µm occurs. It is also interesting that this fungus lives as a mycelium (filaments) unlike their closest relatives, yeast fungi.

<
Archaeorhizomyces finlayi was isolated from the tip of a pine root that was colonized by a mycorrhiz ...
Photo: Audrius Menkis
None

<
Fungus hyphae and swellings (chlamydospores). The fungus was fixated and then photographed using a s ...
Photo: Anna Rosling & Karelyn Cruz Martinez
None

Archaeorhizomyces finlayi was isolated from the tip of a pine root that was colonized by a mycorrhizal fungus. However, scientists have not been able to show that A. finlayi forms ectomycorrhizal structures on roots in the lab. Photographed with a light microscope. 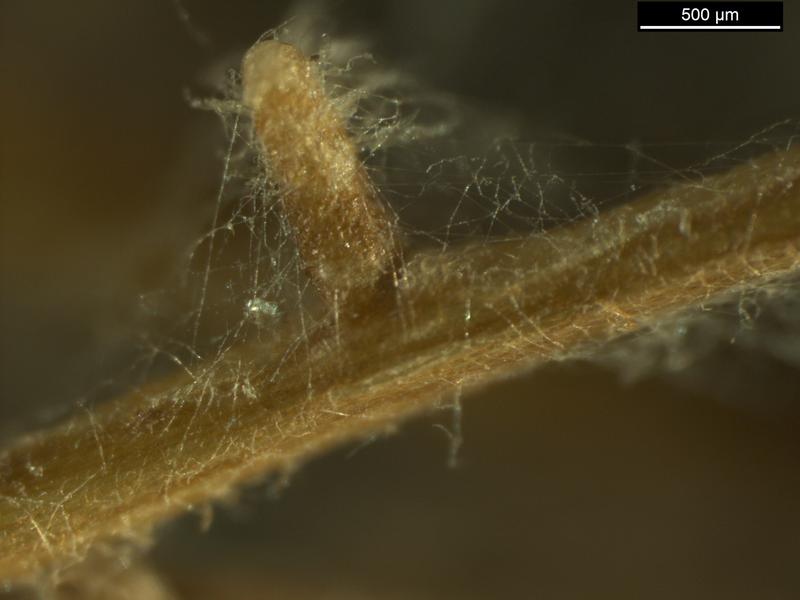 Fungus hyphae and swellings (chlamydospores). The fungus was fixated and then photographed using a scanning electron microscope. 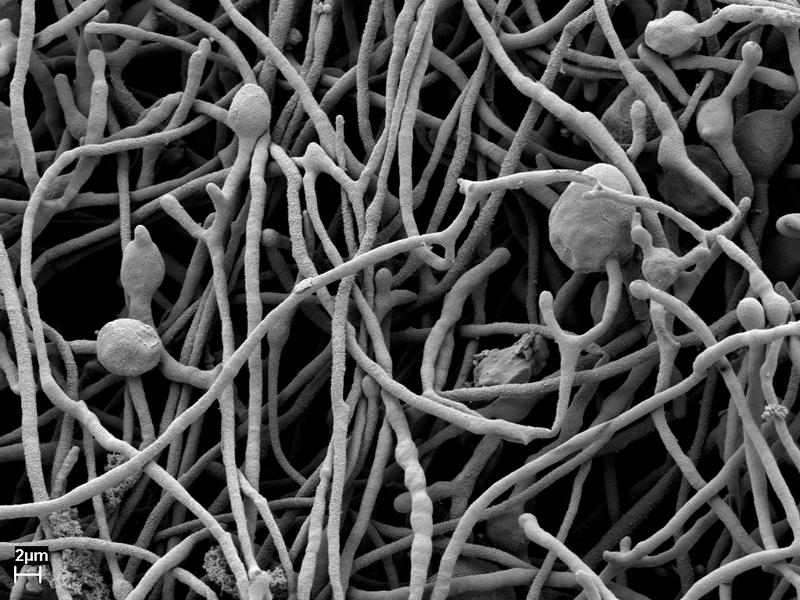