Stroke patients often have difficulties with re-learning simple skills such as walking or talking, and the causes are still unknown. In a new study, researchers from the Bernstein Network and the Universities of Göttingen and Jena now show that a stroke even affects the learning ability of remote brain areas. Learning processes in the visual system of mice were impaired, in some cases even for weeks. The scientists conclude that plastic brain changes are modulated by networks far bigger than previously assumed. By administration of anti-inflammatory drugs, some of the networks were able to regain their learning ability.

In Germany alone, every year some 200,000 people suffer from strokes. It is still not understood why the affected subjects often find it so difficult to relearn everyday abilities. There are still debates about the best starting time for therapy and the best approach towards medication. Scientists have long observed that the localized blood flow disturbance can also affect distant brain areas. Now scientists led by Professor Siegrid Löwel and Professor Otto Witte have examined the effects of a local stroke on neuronal plasticity in the visual system of mice as part of the “Visual Learning” project of the Bernstein Focus: Neuronal Basis of Learning.

Closing one eye in healthy animals leads to an increase in the visual acuity of the remaining eye, and both hemispheres process information from the open eye more intensely. “We have shown that the brain loses this ability after a stroke,” says Franziska Greifzu, PhD student in the laboratory of Prof. Siegrid Löwel, a neurobiologist at the Bernstein Focus Neurotechnology and the University of Göttingen, and head of the study. For the investigation, a stroke was induced in an area of the cerebral cortex that has no known effect on the visual system. Closing one eye immediately after the stroke resulted in the mouse brain being unable to normally adapt to the new situation; it had lost its ability to learn. Two weeks after the brain damage, the ability to adapt was partly regenerated.

The researchers examined whether inflammation could be responsible for this compromised learning. Therefore, they treated the animals immediately after the stroke with an anti-inflammatory drug. The result was that the treated animals developed, as with healthy animals, an increased visual acuity of the open eye. “The impaired learning ability after a stroke could be rescued to normal levels by use of anti-inflammatory drugs”, explains Witte, a neurologist at the University Hospital of Jena.

How the damaged area of the brain affects the visual system is still unclear. “There are obviously a lot more interactions between brain areas than we know and usually test experimentally,” says Löwel. Now the scientists want to examine more closely what changes a stroke entails on the cellular level and how learning ability can be completely restored. The results were published in the renowned scientific journal PNAS.

The project “Visual Learning” of the Bernstein Focus: Neuronal Basis of Learning is part of the Bernstein Network Computational Neuroscience (NNCN) in Germany. The NNCN was established by the German Federal Ministry of Education and Research with the aim of structurally interconnecting and developing German capacities in the new scientific discipline of computational neuroscience. The network is named after the German physiologist Julius Bernstein (1835–1917).

The neurobiologist Prof. Dr. Siegrid Löwel (right) discusses optical recordings from the cerebral cortex of mice with her PhD student Franziska Greifzu. Both scientists work at the Bernstein Focus: Neurotechnology and at the University of Göttingen 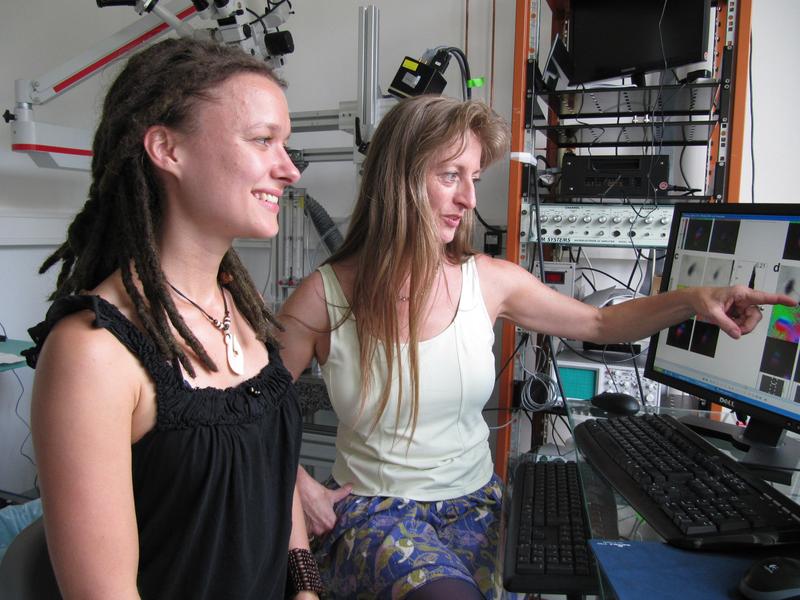