The transistor is one of the most influential inventions of the 20th century. Its crucial function is to drive electrical signals utilising electrical signals in television sets, telephones, PCs and other devices. The smaller the circuits with which the signals are conducted, the faster the data processing. At the University of Bayreuth, a research team centred around Prof. Dr. Jürgen Köhler, Dr. Martti Pärs and Prof. Dr. Mukundan Thelakkat has now demonstrated the amplifying function of an optical transistor. The point: in this transistor, light substitutes electricity. Light signals are driven by light signals.

In the recent online edition of the journal "Angewandte Chemie International Edition", the Bayreuth scientists introduce their discovery. Dr. Martti Pärs, a young physicist, made a particularly noteworthy contribution to the research. The results that have now been published evolved from the close co-operation between Experimental Physics and Macromolecular Chemistry within the Bayreuth campus. The results are the foundation of a completely new generation of transistors. The DFG supports the research in this area within the framework of the research training group "Photophysics of synthetic and biological multichromophor systems".

Two molecules in the team:
one light-driven switch and a strongly illuminating partner

The conceptual model of an optical transistor used in Bayreuth is simple. Two molecules are chemically bound. Using light signals with varying wavelengths, one of the two molecules is alternately brought into a state A or B. The molecule thereby reacts like a switch, alternating between two contrasting states. Depending on whether this light-driven molecular switch is in state A or B, the molecule bound to it emits a weak or strong light signal: light driving light. During this process, a considerable amplification effect evolves as a small light signal is sufficient to bring the molecular switch into a condition whereby the partner molecule strongly fluoresces.

A transistor functioning as described above provides considerable benefits compared to conventional transistors: the latter cannot be optionally reduced in size due to physical reasons. All endeavours to develop the smallest possible circuit for the transport of electrical signals are naturally constrained. However the driving of light signals utilising light signals can be realised at a molecular level as the Bayreuth scientists have now demonstrated. In theory, optical transistors may already exist at the molecular scale. They are innately smaller and therefore faster than electrical transistors.

Another benefit: several optical "mini transistors" can be assembled to become a larger and even more powerful transistor because light signals, as opposed to electrical signals, do not interfere with each other. Therefore a multitude of data is processed simultaneously within a tiny space. Finally, any optical transistor regardless of size is superior relating to one aspect: all signals are processed at the speed of light – to be faster is not possible.

Physical details:
the interior of an optical transistor

The switch molecule used in Bayreuth is dithienylcyclopentene (DCP). In the centre of the symmetrical molecule is a carbon ring. The closed ring is opened as soon as it is hit by an ultra-violet ray of light (280 - 310 nm). The open ring is closed as soon as it is exposed to a visible coloured ray of light (500 - 650 nm). DCP is termed in research a photochrome / photoswitch molecule because it alternates, depending upon the light ray’s wavelength, between the two structures.

At the opposite ends of the DCP molecules, the Bayreuth researchers have attached two organic chromophores, belonging to the perylene bisimides (PBI) group. PBI molecules are known for their ability to fluoresce strongly. This is always the case when a PBI molecule absorbs light energy and emits it.

A PBI molecule that is attached like an arm to a DCP molecule fluoresces with varying intensity – depending on whether the ring in the molecular switch is open or closed. When it is closed, the DCP is at a relatively low energy level. Therefore the PBI transfers the greatest part of its absorbed light energy to the DCP. The DCP dissipates light energy without fluorescence. In this case, the PBI weakly fluoresces. However, when the ring in the DCP is open, we observe the opposite. The DCP is at such a high energy level that the PBI is unable to pass on light energy to the DCP. Instead, it fully emits the absorbed light energy. The PBI is strongly fluorescent.

Based on the above research results, a future vision of a new generation of transistors has emerged. For this vision to be realised one day, further research is necessary. For instance, it seems as if the fluorescent PBI molecules fade during longer periods of time. Consequently, their illumination power weakens. It is worthwhile to examine this effect more closely. A further observation of test conditions used so far is that it takes a relatively long period of time for the rings to open and close for a large number of DCP molecules. As a result, the gaps between the light signals driven by this process are rather large. The Bayreuth research team is therefore striving for a solution in order to minimise these periods of time.

Dr. Martti Pärs works in the department for Experimental Physics IV of Bayreuth University. The experiments regarding the functioning of an optical transistor were largely initiated by him. His research constitutes part of the DFG research training group "Photophysics of synthetic and biological multichromophor systems". 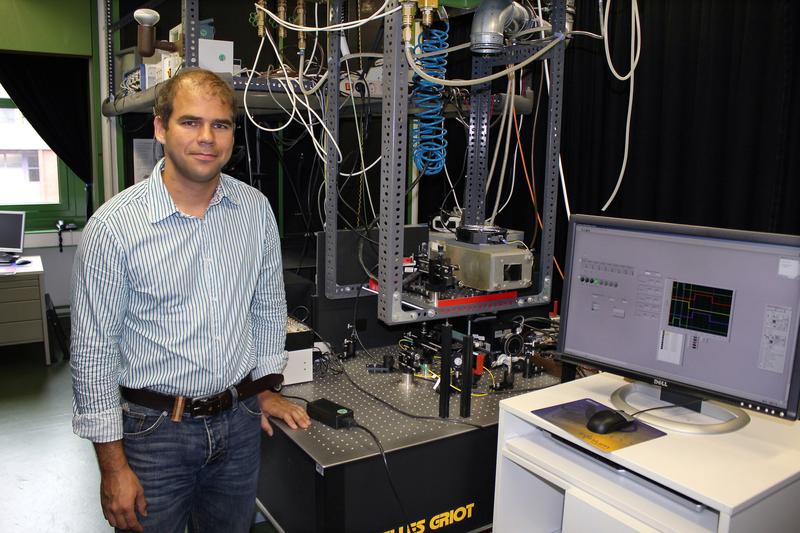