A protein shows plants the oxygen concentration of their surroundings
Erweiterte Suche ?

A protein shows plants the oxygen concentration of their surroundings

Plants need water to grow, but every hobby gardener knows that you shouldn’t carry this to excess either. During waterlogging or flooding, plants can’t take up enough oxygen that they urgently need for their cellular respiration and energy production. Plants respond to this state of hypoxia with the activation of certain genes that help them cope with the stress. Until now it was unclear how plants are sensing the oxygen concentration. Recent experiments show that under hypoxia a protein that can activate genes, a so-called transcription factor, is released from the cell membrane to accumulate in the nucleus and trigger the expression of stress response genes.

Although plants produce oxygen via photosynthesis, in darkness they rely on external oxygen supply just like humans and animals. If the plants are cut off from oxygen supply, as a result of flooding for example, the energy production in the cells comes to a halt and the plants have to adjust their metabolism to the changed conditions. Hitherto, little was known about the way organisms sense the oxygen concentration of their surroundings. According to new discoveries the key component of this pathway in plants is a protein called RAP2.12, which is capable of binding to certain regions of DNA, thereby triggering the transcription of stress response genes. Scientists observed that plants with an overexpression of RAP2.12 show an enhanced tolerance to submergence and a better recovery after flooding events.

Of special importance seems to be the N-terminus of a protein, so to say the beginning of the amino acid chain. If this amino acid sequence is altered by adding or removing amino acids the plant’s response to low oxygen availability deteriorates. Under normal aerobic conditions RAP2.12 is attached to the cell membrane. When the oxygen level declines, the protein detaches from the membrane and accumulates in the nucleus where it can fulfill its duties as a transcription factor and activate certain genes. As soon as the oxygen availability rises to normal levels RAP2.12 is quickly degraded to stop the transcription of the stress response genes. In plants that express an N-terminally altered RAP2.12 the researchers found the protein to be present in the nucleus even before the oxygen stress started. Under hypoxia the modified protein accumulated in the nucleus but it was not degraded when the oxygen levels rose to normal conditions.

Still, it remained unclear how RAP2.12 sensed the change in oxygen concentration. Scientists of the Max-Planck-Institute of Molecular Plant Physiology together with colleagues from Italy and the Netherlands discovered that the so-called N-end rule comes into play. “According to the N-end rule the first amino acid of a protein determines its life span”, explains group leader Joost van Dongen, “there are stabilizing and destabilizing amino acids”. Cysteine, the first amino acid of RAP2.12 belongs to the group of destabilizers – but only, if oxygen is present. Under hypoxia the life span of RAP2.12 increases, it detaches from the cell membrane and makes its way into the nucleus where it triggers the expression of stress response genes. When the oxygen level inside the cell goes back to normal RAP2.12 is degraded in less than one hour. “Our discovery of RAP2.12 as a central component of the oxygen sensing mechanism in plants opens up interesting possibilities to increase the flooding tolerance in crops” illustrates van Dongen. After all, about ten percent of the arable land worldwide is subject to temporary flooding each year. 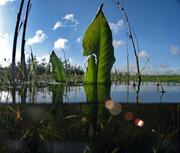 <
If plants are surrounded by water they cannot get enough oxygen.
(© Ole Pedersen)

If plants are surrounded by water they cannot get enough oxygen. 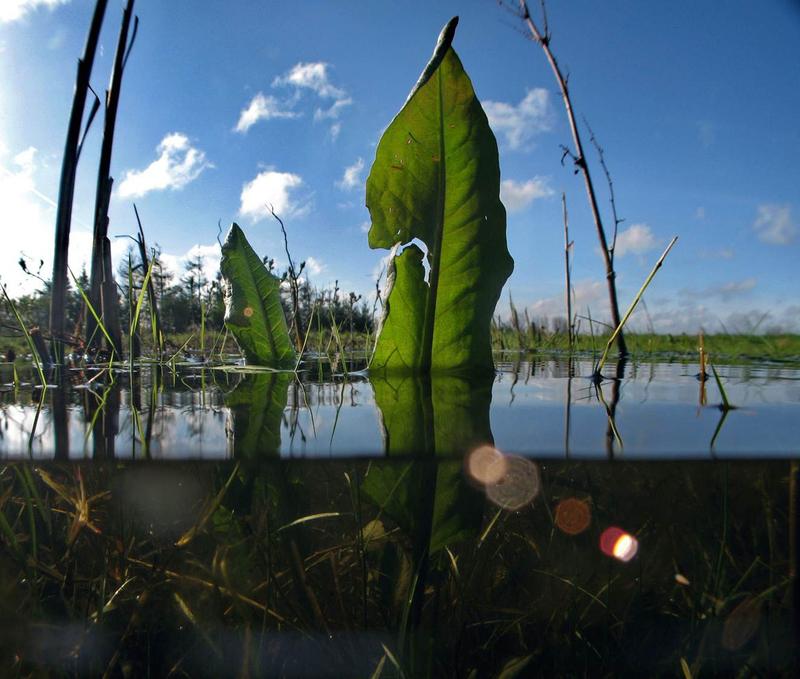