German and American scientists under the lead of Frank Glaw (Zoologische Staatssammlung München) report about newly discovered dwarf chameleons from Madagascar (published in PLoS One). The smallest of the four new species, Brookesia micra, reaches 24 mm in total length including tail and thus ranges among the smalles known reptile species in the world. Juveniles can comfortably sit on the head of a match. All four new species inhabit extremely small ranges and are therefore highly threatened as deforestation on the island continues.

Madagascar is famous for its high levels of species diversity and endemism. Almost 300 species of frogs and approximately 400 species of reptiles live in the rainforests, mountains and arid areas of the island, and new species are regularly discovered. More than 40% of the 193 named chameleon species occur solely on this large island situated off the East African coast. There are also a remarkable number of miniaturized species, including dwarf frogs, dwarf lemurs and dwarf chameleons.

Biologists from Germany and America have discovered four additional miniaturized chameleons in the north of Madagascar (published in PLoS ONE), one of them distinctly smaller than all other known chameleons. The newly described Brookesia micra reaches a maximum snout-vent length in males of 16 mm, and its total length in both sexes is less than 29 mm, ranking it among the smallest reptiles in the world.

"It is not accidental that the smallest species of a given taxonomic group often occur on islands,” says Frank Glaw of the Zoologische Staatssammung in Munich, "it is a typical and well known phenomenon “. Exactly why Brookesia micra is so extremely small is still insufficiently studied, but could be due to a "double island effect," as this species is only known from a small (115 ha) karstic islet just a few kilometers separated from the mainland of Madagascar. The extreme miniaturization of Brookesia micra might also be accompanied by numerous adaptations of the bodyplan - a promising field for future research.

All of the newly discovered chameleons appear to be restricted to very small distribution ranges, sometimes limited to a few square kilometers. "For this reason they might be especially sensitive to habitat destruction" says Jörn Köhler of the Hessisches Landesmuseum Darmstadt. "One of the new species, Brookesia desperata, is known only from a small rainforest remnant, and although this area is officially protected, it has suffered severe habitat degradation". The future survival of Brookesia tristis is uncertain as well. In the time since its habitat was designated a nature reserve, illegal logging has increased significantly - probably at least partially due to the current political crisis in Madagascar. The species names of these two chameleons (desperata = desperate, tristis = sad) were consciously chosen to call attention to their uncertain futures.

"The tiny new chameleons show remarkable genetic divergences between species, although superficially they closely resemble each other. This indicates that they separated from each other millions of years ago - even earlier than many other chameleon species,” says Miguel Vences from the Technical University of Braunschweig. "The genus Brookesia is the most basal group within chameleons", adds Ted Townsend of San Diego State University, who carried out the genetic studies. "This suggests that chameleons might have evolved in Madagascar from small and inconspicuous ancestors, quite unlike the larger and more colourful chameleons most familiar to us today.”

http://www.mvences.de/Tiny_chameleons.zip - High-resolution versions of these photos

<
Small enough to stand on the head of a match. A juvenile of Brookesia micra, one of the smallest rep ...
Photo by Jörn Köhler
None

<
Like an alien: A portrait of an adult specimen of one of the newly discovered mini chamaleons, Brook ...
Photo by Frank Glaw
None

Small enough to stand on the head of a match. A juvenile of Brookesia micra, one of the smallest reptiles in the world.

Like an alien: A portrait of an adult specimen of one of the newly discovered mini chamaleons, Brookesia desperata. 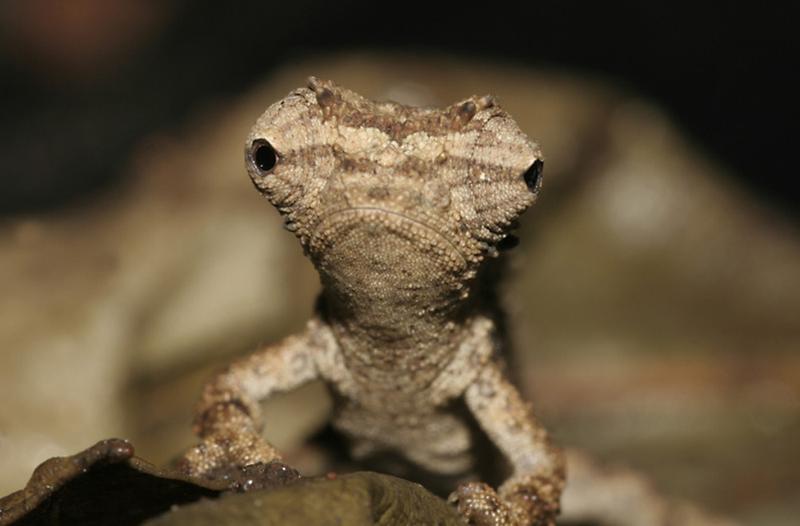