Frankincense as a Medicine
Erweiterte Suche ?

Home > Pressemitteilung: Frankincense as a Medicine

Frankincense as a Medicine

It was one of the gifts of the Magi – in addition to myrrh and gold they offered frankincense to the newly born baby Jesus. Since the ancient world the aromatic fragrance of burning Boswellia resin has been part of many religious ceremonies and is still used as a means to indicate special festive atmosphere in the church today. But frankincense can do much more: “The resin from the trunk of Boswellia trees contains anti-inflammatory substances,“ Professor Dr. Oliver Werz of the Friedrich Schiller University Jena (Germany) says. The chair of Pharmaceutical and Medical Chemistry is convinced that these substances can be very beneficial in therapies against diseases like asthma, rheumatoid arthritis or atopic dermatitis.

However, so far the active substances in frankincense cannot at present be found in drugs in German pharmacies, as the pharmacological impact of frankincense hasn’t been thoroughly investigated. “Although Boswellia resin has been used for thousands of years in the Ayurvedic medicine for instance, the clinical studies we have so far are not suffice for a license in Germany and Europe,“ Professor Werz explains.

But that could change. As part of a mutual project with partners of the University Saarbrücken and a start-up company, Professor Werz and his team examined the curative effect of frankincense. In this project the researchers were able to show where exactly the boswellic acids – which are responsible for the impact of the ingredients of the Boswellia resin – actually interfere in the process of inflammation. “Boswellic acids interact with several different proteins that are part of inflammatory reactions, but most of all with an enzyme which is responsible for the synthesis of prostaglandin E2,” Oliver Werz points out. Prostaglandin E2 is one of the mediators of the immune response and plays a decisive role in the process of inflammation, in the development of fever and of pain. ”Boswellic acids block this enzyme efficiently and thereby reduce the inflammatory reaction,“ the Jena pharmacist explains. With this, not only a targeted use in the therapy of inflammatory diseases is conceivable. It can also be expected that boswellic acids have less side effects than today’s prevalent anti-inflammatory treatments like diclofenac or indometacin. Their impact is less specific, they can increase the risk of stomach ulcers and can negatively affect renal function.

In their latest study the researchers around Professor Werz additionally compared the resin of different kinds of frankincense in its anti-inflammatory impact. There are more than ten Boswellia species in the world. The most well-known and widely-used one is the Boswellia serrata from Northern and central India. “We were able to show that the resin of the Boswellia papyrifera is ten times more potent,” Professor Werz explains a further result of his research. This species mostly occurs in the Northeast of Africa (Ethiopia, Somalia) and on the Arabian Peninsula (Yemen, Oman).

Whether frankincense will become accepted, is indeed not only due to the outcome of the clinical examination which is yet to come. “Boswellic acids exclusively occur in the resin of Boswellia trees and are very difficult to produce synthetically,“ Werz points out. Therefore these trees are the only source of these promising active ingredients. However Boswellia trees are already an endangered tree species. In many places they are just being used as heating fuel. “Thereby without sustained protection not only plant species are endangered but at the same time medicine loses promising active ingredients,” Professor Werz warns. 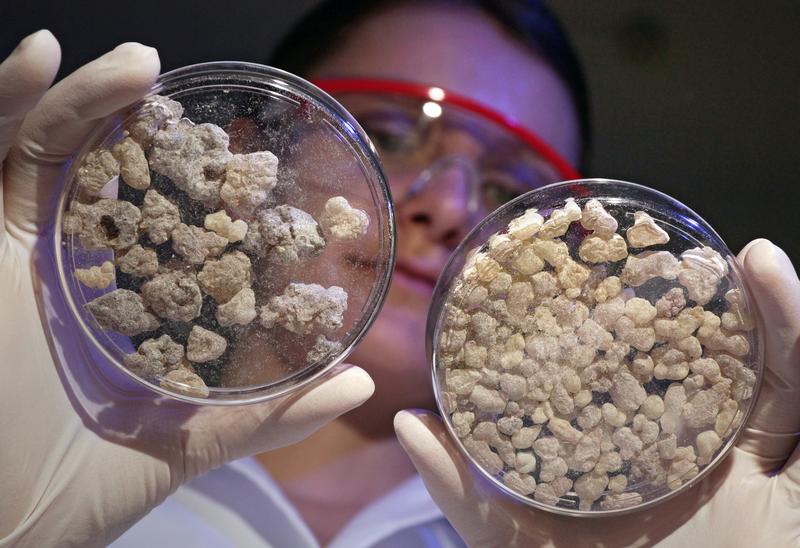