The Hula Painted frog is not extinct – the double rediscovery of a living fossil
Erweiterte Suche ?

Home > Pressemitteilung: The Hula Painted frog is not extinct ...

A biological sensation and hope for nature conservation: The first amphibian to be declared extinct is rediscovered after almost 70 years. A study led by researchers of the Universities of Tel Aviv and Jerusalem (Israel) and Braunschweig (Germany) revealed that the rediscovered frog is a true living fossil, without close relatives among other living frogs.

In 1996, an international commission evaluated the status of the Hula Painted Frog (Latonia nigriventer), an amphibian from northern Israel. The situation seems to be obvious: The habitat of the species is almost completely destroyed by intensified agriculture, and since 1955 no living individual has been observed. The species is thus declared as extinct, the first such case among amphibians worldwide.

This marked the start of a global trend: An ever increasing number of amphibians on our planet are threatened, and over 30 species became extinct in the past decades. Some biologists already speak about an era of mass extinction for this group of animals.

But in some cases hope might still be justified. A team of Israeli, German and French researchers now report in the prestigous scientific journal Nature Communications on the rediscovery of the Hula Frog. After intensive nature conservation efforts in its original habitat - near the borders to Syria and Lebanon -several specimens have now again been observed in the wild.

"It is incredible that this amphibian species has survived in this intensively monitored area, without an observation for over 60 years. Maybe this emblematic frog can even become again trendsetter, and more amphibians may prove to have survived in some remote areas although we consider them as extinct" states Professor Sarig Gafny, a freshwater biologist of the Ruppin University in Israel who coordinated the field work on the rediscovered frog.

Now for the first time an in-depth scientific analysis of this enigmatic amphibian became possible - and yielded the next surprise: the Hula Frog differs strongly from its living relatives, the painted frogs from northern Africa and western Africa. Instead the Hula Frogs is related to a genus of fossil giant frogs, Latonia, which were found over much of Europe during the past 10 million years.

Rebecca Biton, an archaeozoologist and paleontologist at the Hebrew University in Jerusalem, who analysed with Salvador Bailon and Renaud Boistel of the MNHN and CNRS in France, skeletons of the Hula frog and compared them with ancient fossils from across Europe and Israel: "We were astonished to notice how much the Hula frog skeletons agree with those of the Latonia fossils, clearly suggesting the species actually is part of this group of giant frogs”

That the Hula frog is an ancient living fossil is also supported by molecular data sets. "Given the large genetic differentiation of the Hula frog, it is suggested that it separated at least 19 million years ago from its closest living relatives" says Professor Miguel Vences, an amphibian specialist from the Technical University of Braunschweig in Germany who participated in the study.

This makes implementing effective conservation measures even more important. "To save this emblematic living fossil, it is crucial to collect more data on its natural history, and to reflood parts of the Hula valley to restore a larger portion of its original habitat" says Professor Eli Geffen of Tel Aviv University who coordinated the genetic work on the Hula frog.

<
A unique character of the Hula painted frog is its black venter with white spots.
Photo: Frank Glaw, free for publication.
None 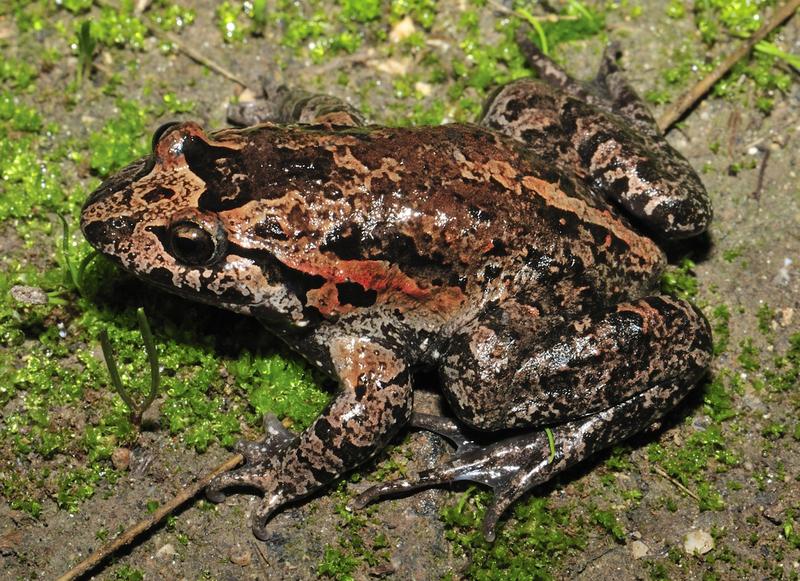 A unique character of the Hula painted frog is its black venter with white spots. 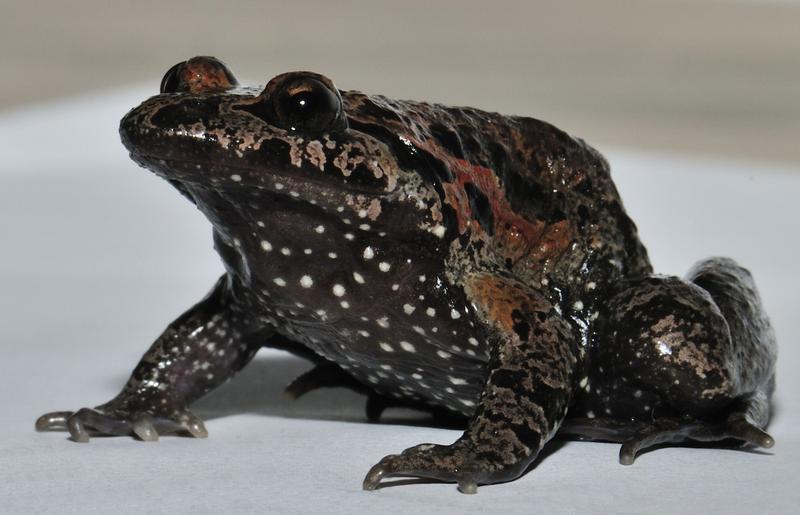