A team of quantum physicists in Innsbruck led by Christian Roos and Cornelius Hempel have realised an extremely sensitive method for the spectroscopy of atomic and molecular atoms. This technique can be used to closely study a number of particles. The scientists have published their findings in the journal Nature Photonics.

Almost 200 years ago, Bavarian physicist Joseph von Fraunhofer discovered dark lines in the sun’s spectrum. It was later discovered that these spectral lines can be used to infer the chemical composition and temperature of the sun’s atmosphere. Today we are able to gain information about diverse objects through light measurements in a similar way. Because often very little light needs to be detected for this, physicists are looking for ever more sensitive spectroscopy methods. In extreme cases, also single particles of light (photons) need to be measured reliably, which is technically challenging.
Thus, physicists at the Institute for Quantum Optics and Quantum Information (IQOQI) at the Austrian Academy of Sciences and the Institute for Experimental Physics of the University of Innsbruck take a detour via the technique of quantum logic spectroscopy. It was developed some years ago by the group of Nobel laureate David Wineland to build extremely precise atomic clocks. This is one of the first practical applications of quantum information processing and, in the next few years, may lead to a redefinition of the second in the international system of units.

Measurement via entanglement
Christian Roos’ and Cornelius Hempel’s team of physicists in Innsbruck isolated single ions in an ion trap to study them under controlled conditions. “We do not try to detect the photon that is emitted or absorbed by an ion, but rather the momentum kick the ion receives upon absorption or emission,” explains Cornelius Hempel. “While this effect is extremely small, we can detect it by means of quantum physics.” The physicists use an additional ‘logic’ ion, on which the measurement is performed. “This calcium ion (40Ca+) can be controlled very well in the experiment,” says Hempel. As spectroscopy ion the researchers use another isotope of calcium (44Ca+).
In the experiment a laser pulse excites the particles and entangles the electronic state of the logic ion with the vibration of the particles. “In this configuration, also called Schrödinger cat state, the ions swing like a classical pendulum in a trap. But as a ‘quantum pendulum’ they swing in both directions at the same time,” describes Hempel the central part of the experiment. “We then excite the ion we want to investigate by applying different laser frequencies. At a certain frequency the ion emits a single photon and receives a minimal momentum kick, which causes the vibrational components to be slightly displaced. This can be observed through the electronic state of the logic ion. Combined with this information, the frequency of the laser then allows us to gain information about the internal state of the spectroscopy ion.” In the current experiment the scientists detected single photons with a probability of 12 %. “We, thus, prove that this technique works in principal. With a technically optimized set-up we will be able to considerably increase the sensitivity,” say Roos and Hempel confidently.

Universal application
“By using the exotic concept of quantum mechanical entanglement we are able to gain practical knowledge about single particles,” says Christian Roos excitedly. “Since our method of measurement does not depend that much on the wave length of the detected photon, it may be used for various purposes,” adds Cornelius Hempel. For example, energy levels of different atoms and molecules could be investigated by using this technique. Because it is difficult to control molecules in an experiment, this method is an enormous progress for studying more complex structures.

<
As a ‘quantum pendulum’ the ions swing in both directions at the same time.
Illustration: IQOQI/Knabl

As a ‘quantum pendulum’ the ions swing in both directions at the same time. 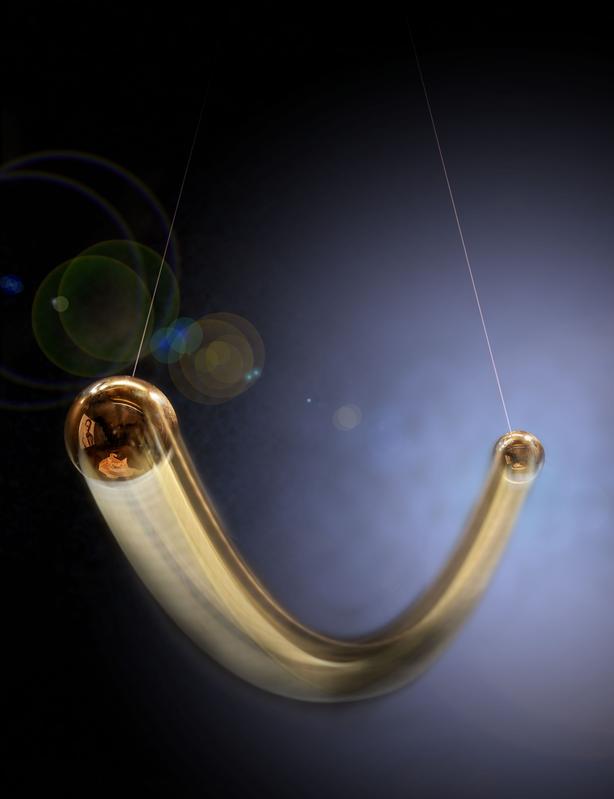