Scientists from the Institute of Business Administration and the Institute of Railway and Transportation Engineering at the University of Stuttgart are jointly investigating along with other partners from the region to what extent local public transport can be improved in the countryside through active citizens’ involvement and the use of electric mobility. The starting signal for the project “e-Bürgerbus” (electric citizens’ bus), planned to last two years, will be given in a kick-off event on 22nd September at 6 pm in the town hall of the trial municipality of Salach/ District of Göppingen.

A closely-knit network of local public transport is not universally profitable in rural areas since the routes are short and frequently only one to two bus stops are serviced in small communities. In these places in particular citizens’ buses operated by a club with active citizens’ involvement, for example, could supplement the supply of local public transport based on partnership. At the same time citizens’ bus routes offer an optimum utilisation scenario for electric mobility due to the short routes of between 80-120 km/day.

The objective of the electric citizens’ bus project is to test and evaluate in practical terms electrically operated citizens’ buses or ones equipped with hybrid drive in smaller cities and municipalities in the region of Stuttgart. For this purpose a minibus will be made available to the trial municipalities during the term of the project for fundamental research that along with the electric drive is characterised in particular by it fulfilling the requirements of licensed transport services. The vehicle will be utilised in the trial municipalities in terms of a multiplier effect. This mobility approach will also supply the project with data that includes the special characteristics in the trial municipalities (for example line structure, topography, operating periods). This also serves the purpose of searching for a business model for permanently adopting this mobility concept.

Along with the University of Stuttgart, the local transport company of Baden-Württemberg, NAMOREG branch office, and the Transport Research Association (VWI) are involved in the project, funded by the Ministry for Transport and Infrastructure Baden-Württemberg with a sum of around 310,000 Euros. Apart from Salach in the district of Göppingen, the trial municipalities are Ebersbach and Uhingen. The project is a part of the research association showcase electric mobility Baden-Württemberg, comprising around 40 individual projects. Going by the name of LivingLab BWe mobil and financed by the federation and the states, electric mobility is tested here at the interface of the energy system, vehicle and transport system. The project partners wish to further develop the citizens’ bus concept with a view to the future challenges of local public transport, in particular in more rural regions and take into account economic, ecological and social viewpoints. The results of the trial will be entered in a decision proposal that provides sound facts on the sense of purpose of using electric citizens’ buses depending on special municipal features and that is to be used for comparison with using conventionally operated citizens’ buses. Based on this a project guide for interested municipalities will be drawn up showing how electric citizens’ buses can be successfully implemented. This also includes organisational aids for founding citizens’ bus clubs. The guide is also to guarantee the transferability of the project results to municipalities outside of the region.

Participating in the kick-off event on 22nd September at 6 pm in Salach Town Hall, Rathausplatz 1, 73084 Salach will be Prof. Ullrich Martin (Institute for Railway and Transportation Engineering and Prof. Georg Herzwurm (Institute of Business Administration, Chair for General Business Management Studies and Business Informatics II) from the University of Stuttgart. The municipality of Salach will be represented by the Mayor Bernd Lutz and by the branch office manager of the local public transport company of Baden-Württemberg NAMOREG, Rainer Gessler. Furthermore, a driver from the citizens’ bus clubs from the trial municipalities will also be speaking. 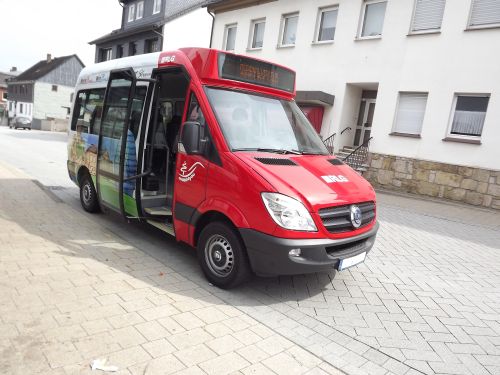