Colorful nano-guides to the liver

Jena scientists have been successful in producing highly specific nanoparticles. Depending on the bound dye the particles are guided to the liver or to the kidney and deliver their payload of active ingredients directly to the targeted tissue. Moreover, the dyes enable the tracking of the transport processes by intravital microscopy or, in a non-invasive way, by multi spectral optoacoustic tomography. The reduction of cholesterol production induced by siRNA served as the proof-of-principle for the developed method. The scientists report their data in the new edition of the scientific journal “Nature Communications”.

They are one of the great hopes for target-oriented treatment approaches: the so-called small interfering RNA-molecules, siRNA. These are able to mute specific genes, by preventing them from producing proteins which are encoded on them. To accomplish this, the siRNA has to be delivered specifically into the targeted cells in order to work only there and nowhere else. Moreover, the siRNA should not be just excreted or, even worse, damage healthy tissue. This is what makes the handling of siRNA extremely difficult. Physicians and chemists from Jena, Munich (both Germany) and the USA have now succeeded in producing nano-transporters for this genetic material which are able to specifically and efficiently target selected cell types and release their active payload there.

The particles which are based on polymers are marked with near infrared fluorescent dyes and loaded with siRNA. The dyes work like address labels and tracking numbers for the particles all in one. “Depending on the chemical structure of the dye the particles are filtered out of the blood either via the kidney tissue or via liver cells. At the same time this route can easily be tracked by optical methods with the aid of the dyes,” describes intensive care physician Prof. Dr. Michael Bauer. His research team at the Jena Hospital Centre for Sepsis Control and Care (CSCC), which is supported by the Federal Ministry of Education and Research, was also able to show that the dye is specifically absorbed by a specific cellular transporter of the liver epithelial cells and taken up into the cells.

In this way the siRNA load is exclusively released in the target cells. The specifically functionalized nano-containers have been designed and produced in the laboratories of the Jena Center for Soft Matter (JCSM) of the Friedrich Schiller University in Jena. “This method can be regarded as a kind of toolbox for a multitude of different siRNA-nanotransporters which can ensure the targeted ,switch–off’ of specific protein biosynthesis in different cell types,” the Director of the JCSM, Prof. Dr. Ulrich S. Schubert, states. With the possibility to test the non-coupled dyes in advance and to switch off genes which are associated with illnesses, the principle offers new approaches to a personalized therapy of various diseases. In the newly founded SmartDyeLivery GmbH, the Jena scientists want to further develop the technology to put it into practical use in the clinical environment, especially in cases of acute septic infections.

The Jena nanomedicine researchers explain in their study the working principle of their toolbox using the example of cholesterol production. They loaded the nanoparticles with targeting dyes attached with siRNA-molecules. The siRNA molecules interfered with cholesterol production in hepatocytes, which resulted a clear reduction in the cholesterol level in the blood of test animals. The study is now published in the scientific journal “Nature Communications“. 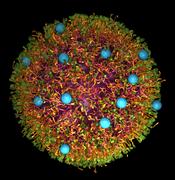 <
Scheme of a nanoparticle loaded with drug in the core (purple) and specific dye marker at the surfac ...
Source: JCSM/SmartDyeLivery GmbH
None

<
Scheme of a nanoparticle loaded with drug in the core (purple) and specific dye marker at the surfac ...
Source: JCSM/SmartDyeLivery GmbH
None

Jena scientists have been successful in producing highly specific nanoparticles delivering their payload directly to the liver or to the kidney depending on the dye, which is bound to the particle. 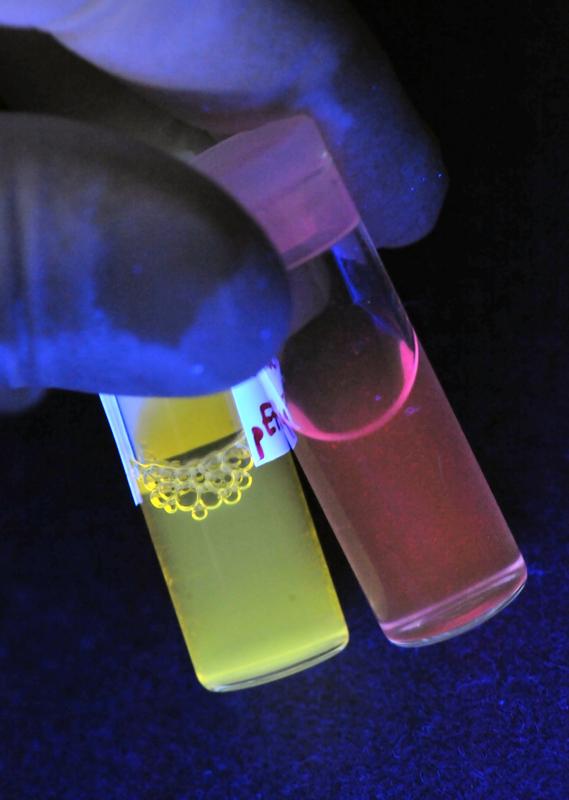 Scheme of a nanoparticle loaded with drug in the core (purple) and specific dye marker at the surface of the particle (blue dots). 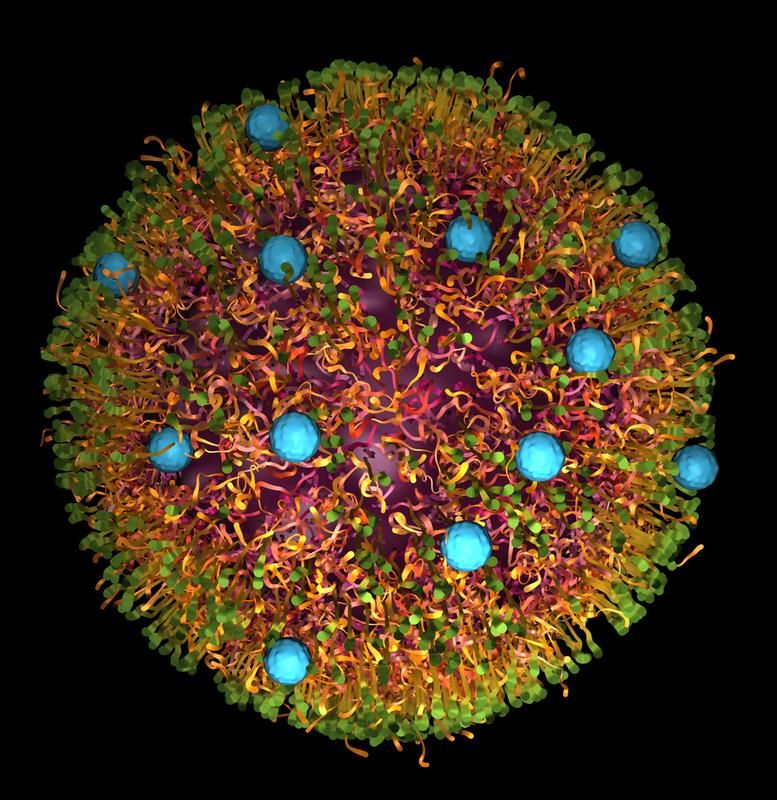