Largest carnivorous sundew of the Americas discovered on Facebook

An international team of botanists from Brazil, USA and the Botanische Staatssammlung München, Germany described a new species of carnivorous sundew (Drosera, Droseraceae), which was discovered on a not-so-remote mountain in Southeastern Brazil. The new species, which has been named Drosera magnifica (the magnificent sundew), turned out to be the largest of its kind known from the Americas, attaining a total length of 1.5m.

The spectacular thread-like carnivorous foliage is up to 24 cm long forming medusa-like clusters of sticky, glistening leaves.
Although discoveries of new species are not unusual, even nowadays, the way in which this new giant sundew species was discovered is exceptional: it is the first time that a new plant species has been discovered from a photograph which was posted on the social network Facebook. A local orchid and native flora enthusiast posted the pictures in 2013, taken while exploring mountains near his hometown in Minas Gerais state. The pictures were picked up and immediately identified as a new sundew species by carnivorous plant experts Fernando Rivadavia and Paulo Gonella.
The new species has now been published in the renowned taxonomical journal Phytotaxa, including a detailed scientific description of the plant and a brief history of its unusual discovery.
“The genus Drosera, also known as sundews, is the largest group of carnivorous plants, and comprises approximately 250 species, most of them found in the Southern Hemisphere, especially in Australia, South Africa and Brazil”, says Dr. Andreas Fleischmann from the SNSB, Botanische Staatssammlung München, senior author of the publication. Sundews produce leaves that are covered with carnivorous glands, so-called tentacles, which produce sticky droplets of a viscous fluid. These glistening red tentacles constitute visually attractive yet deadly traps for small arthropods, especially small flying insects. Indeed, “even under the humid, foggy and rainy conditions on the mountain summit where it grows, the long thread-like leaves of Drosera magnifica surprisingly were covered with lots of small insects”, says sundew expert Fernando Rivadavia, who studied the plants in nature in 2013, soon after its discovery on Facebook. In most Drosera species, the tentacles and even the leaves are capable of movement, and will bend over the caught prey, entangling it with more glue and adhering it to more glands. The insects then suffocate and are slowly digested by enzymes secreted by the plant. This ensures a nutrient boost from its carnivorous diet, supplementing the nutrient-poor soils on which most carnivorous plant species usually grow.
It is interesting that such a large and conspicuous plant species has remained undiscovered until now, even though it was not growing on a terribly remote Amazonian mountain. This is an example of how little is still known about Brazilian biodiversity, even in the more well-developed parts of the country.
Despite being quite distinctive and unusual, the new species also shares some similarities with two other sundew species which were discovered and named 200 years ago, and are found on other highlands over 200km away, also in Southeastern Brazil.
Sadly, the magnificent sundew is already threatened with extinction. The new species was only found on a single mountain top rising above small ranches, coffee farms, and eucalyptus plantations. Invasive plant species were observed almost all the way to the top of the mountain, which is almost completely deforested around the base and is currently not protected by any kind of nature preserve or national park. Nearby mountains were explored by the scientists, but no other populations of this sundew have been found yet.
“We hope that the discovery of such an extraordinary new plant species will bring attention to the conservation of this fragile ecosystem. It was a surprise to all of us that this region of Minas Gerais was so poorly botanized, potentially harboring several other undescribed new plant species”, states Paulo Gonella, from the Systematic Botany Labs of the University of São Paulo, Brazil, who is currently working on the systematics and phylogeny of New World sundews in Munich, Germany.
Original publication:
Gonella, P.M., Rivadavia, F., Fleischmann, A. (2015). Drosera magnifica (Droseraceae): the largest New World sundew, discovered on Facebook. Phytotaxa 220 (3): 257-267. http://dx.doi.org/10.11646/phytotaxa.220.3.4
Contact: Brazil: Paulo Gonella
phone: +49-89-17861-200
USA: Fernando Rivadavia
e-mail: fe_riva@uol.com
phone: +1-415-5162192
Europe: Dr. Andreas Fleischmann, SNSB, Botanische Staatssammlung München e-mail: fleischmann@bsm.mwn.de
phone: +49-89-17861-265
http://www.botanischestaatssammlung.de
http://www.snsb.de
Image: The giant new species Drosera magnifica in its habitat. Photo: Paulo Gonella.

<
The giant new species Drosera magnifica in its habitat.
Paulo Gonella
None

<
The giant new species Drosera magnifica in its habitat.
Paulo Gonella
None

The giant new species Drosera magnifica in its habitat. 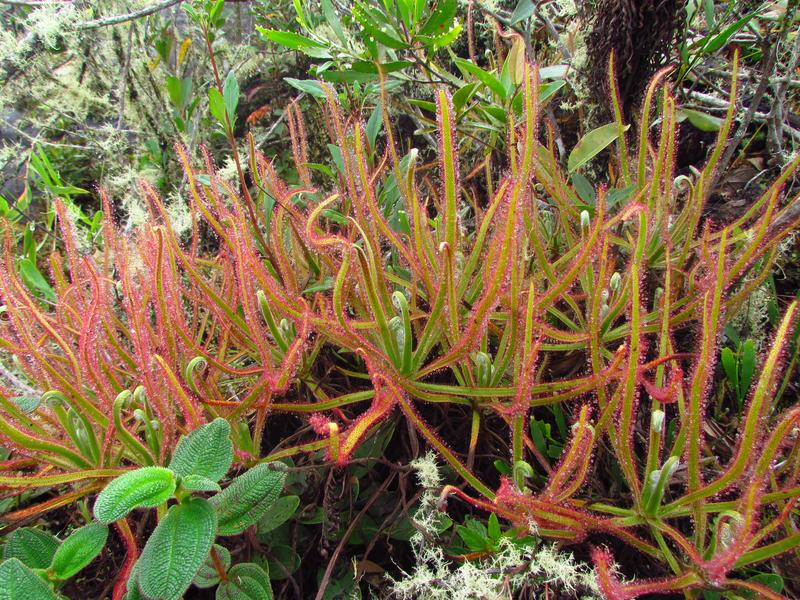