Home > Pressemitteilung: “move“ – on course for the mobility ...

“move“ – on course for the mobility of the future

The demonstration and technology platform “move” enables Empa researchers to develop new vehicle drive concepts with significantly lower CO2 emissions and test them in practice. It uses surplus electricity from photovoltaic plants or hydropower stations as an energy source. On the one hand, this enables batteries in electric cars to be charged. On the other hand, the electricity can also be converted into hydrogen for fuel cell vehicles or synthetic methane for natural gas/biogas vehicles.

On November 23, 2015, Empa officially opened the research and technology transfer platform “move” in the presence of renowned energy and mobility experts. Over the next few years, Empa will use the platform to study how surplus renewable electricity can be converted into fuel for cars, utility vehicles and machinery in the summertime and thus be rendered utilizable as energy. The name “move” doesn’t just stand for motorized mobility, but also the switch from fossil to renewable energy – all the way to the realization of a closed carbon cycle modeled on nature.

Two important insights paved the way for “move”: Firstly, mobility is responsible for approximately 40 percent of Switzerland’s CO2 emissions. These emissions can be reduced the most significantly if we switch to renewable energy as source of fuel for vehicles. Secondly, the expansion of solar power production evidently leads to large quantities of surplus electricity in the summer months, which are difficult to use on the electricity market. Converting it into synthetic fuel for mobility, however, actually makes this possible. These two factors prompted Empa to launch a large-scale project, which demonstrates the switch from fossil to renewable energy throughout the entire value-added chain. This energy supply is coupled with efficient electric, hybrid, fuel cell and gas vehicles.

At the inauguration of “move”, Konstantinos Boulouchos from the Institute for Energy Technology at ETH Zurich, presented an energy overview with numerous challenges, but also fresh opportunities. ETH Zurich and Empa collaborate in the field of mobility and therefore cover a broad spectrum from basic and applied research to demonstration plants. Synthetic, electricity-based fuels in efficient drives is one of the researchers’ visions of the future.

The ceremony was opened by Brigitte Buchmann, Head of the Department Mobility, Energy and Environment and a member of Empa’s Board of Directors. She is the strategic head of the large-scale project and uses the platform to render issues in the fields of mobility, energy and the environment and approaches to solving them more transparent. Empa CEO Gian-Luca Bona referred to the significance of technology transfer platforms like “move” in the context of complete solutions. Research in labs and its realization in demonstrators complement each other ideally and are a crucial aspect of the technology transfer from academic research to the industrial partners. “Only if the latest research results are also – quite literally – brought onto the roads can we prepare innovative and practical solutions in the mobility sector for the market,” says Bona. This is precisely where “move” comes in.

Walter Steinmann, Director of the Swiss Federal Office of Energy (SFOE), highlighted the importance of pilot and demonstration plants for the Energy Strategy 2050. The SFOE is involved in funding “move” to promote efficient, sustainable technologies. Lothar Ziörjen, Mayor of the energy city Dübendorf, reported on the scheduled field trial with the hydrogen-powered road sweeper vehicle and the major benefits of applied research projects for its realization. Hans Magits, Chief Technical Officer at the compressor manufacturer AtlasCopco, one of “move’s” main partners, stressed the merit of such platforms for the further development and testing of new technologies.

“Nature as a role model!“ – According to Christian Bach, Head of Empa’s Automotive Powertrain Technologies Laboratory, the inspiration behind “move“. Plants have been using sunlight, water and CO2 to supply themselves sustainably with energy for millions of years. “move” aims to reveal how this concept can be realized for individual mobility. The project doesn’t just focus on one, specific drive concept, but rather integrates a broad range of drive technologies from electric and hybrid cars to fuel cell and gas vehicles. As Bach explains, this enables the advantages of the various drives to be exploited accordingly for different applications. However, the researchers won’t just make energetic and ecological comparisons in “move”; they will also study the economic viability of the various concepts together with their implementation partners.

At the end of the ceremony, Urs Cabalzar, the technical project manager on “move“, gave a tour of the plant. In the current expansion phase, renewable electricity is converted into hydrogen in an electrolysis plant, compressed to 44 bars and stored in compressed gas containers. The hydrogen can then be used to refuel fuel cell vehicles directly or be mixed with natural/biogas in a separate fuel pump.

«move» – demonstration and technology transfer platform for the mobility of the future
«move» is an Empa demonstration platform backed by numerous partners from research, industry and the public sector. Empa’s main partners here are the ETH Board, the Swiss Federal Office of Energy (SFOE), the City of Dübendorf, Glattwerk AG and the companies AtlasCopco, H2 Energy and Hyundai. These are joined by a series of academic and industrial partners who are involved in individual projects within the scope of the demonstrator. 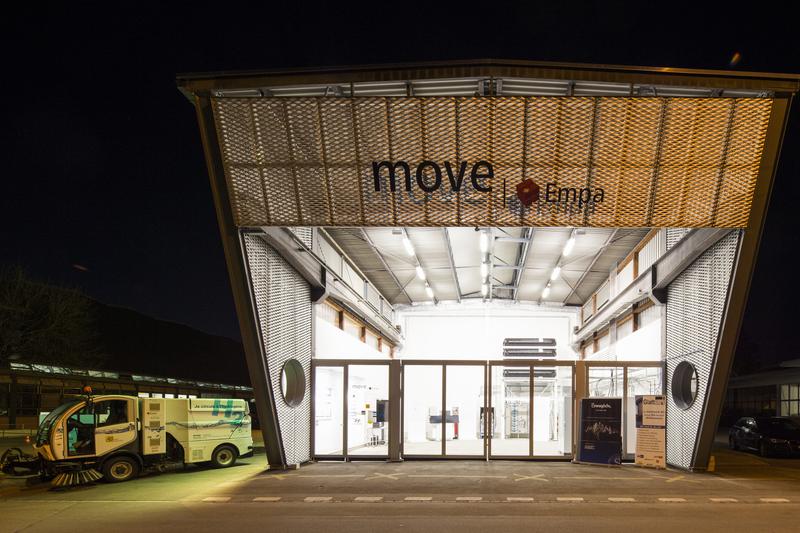 Inauguration of “move” on November 23, 2015. In front of the building parks a Hyundai ix35 Fuel Cell, which can be refueled at move with Hydrogen from renewable sources 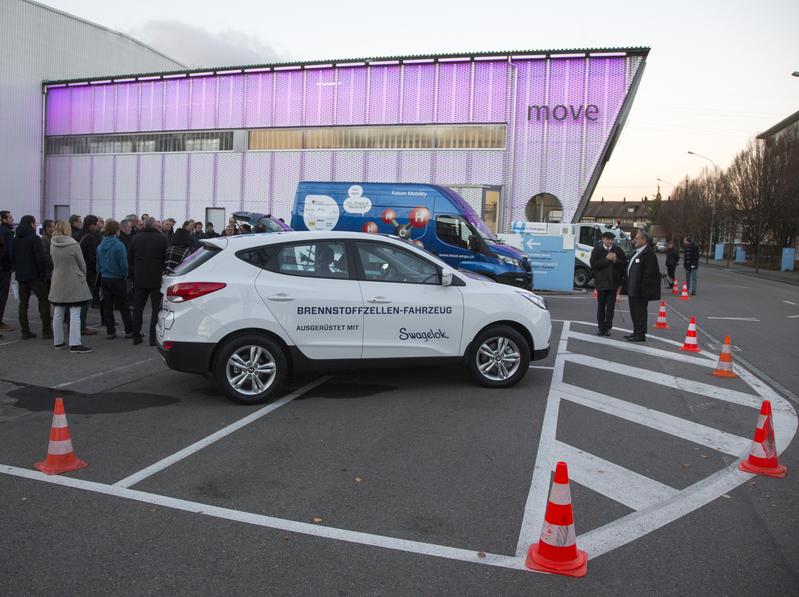