Home > Pressemitteilung: Get to the point with electric cars

Get to the point with electric cars

Electric vehicles are increasingly no longer charged with electricity by cords but by means of inductive charging systems. Charging takes place via a magnetic field which is generated by a charging coil in the parking ground and transmitted to a receiver coil on the underbody of the car according to the transformer principle. In order for this to work, the driver must park the car in a way that both coils are exactly on top of each other. Without an adequate assistance system this is virtually impossible - but precisely this kind of system has been lacking until recently. At the Institute for Internal Combustion Engines and Automotive Engineering (IVK) at Stuttgart University a method has now been developed that accomplishes positioning accurate to the nearest centimeter.

The advantage of inductive charging systems is that in the car no charging cord must be carried, and in addition they are more secure against vandalism. However, in spite of several years of research and various technological approaches the search for a positioning method which enables precise localization of the charging coil and thus assists the driver in aligning the vehicle has not brought any satisfactory solutions so far. Either the procedures were inaccurate, immature and expensive, or very susceptible to weather conditions.

Within the scope of his doctoral thesis at IVK headed by Prof. Hans-Christian Reuss, Dean Martinovic has now developed and patented a new method based on magnetic fields with which a vehicle can be placed so precisely that the position of the two coils differs by less than one centimeter.

In the project "BIPoLplus“ that is funded by the Federal Ministry of Education and Research (BMBF) as well as supported by the Research Institute of Automotive Engineering and Vehicle Engines Stuttgart (FKFS) within the framework of the leading-edge cluster "Electromobility South-West", he uses a pulsed magnetic field of low frequency for the first time instead of the usual sinusoidal magnetic field. This way, interfering interactions with the metallic underbody of the electric vehicle can be avoided. Special highly sensitive magnetic field sensors attached directly to the metal underbody of the electric vehicle scan the magnetic pulse signal and send the information to a control unit in the vehicle. A specifically developed algorithm then calculates automatically - without any communication with the signal-emitting electronics on the parking site - the position of the charging coil. Finally, this position is being displayed to the driver using a 3D application on a tablet in the cockpit supporting the driver in the precise alignment of the vehicle. Thereby, the driver can trace his/her motion in real time. The current prototype uses two magnetic field sensors which indicate the position reliably as soon as the two coils approach each other to a distance of 1.5 meters. Compared to other physical quantities the magnetic field disposes of significant advantages: for example it is not subject to attenuation during the penetration of materials and as opposed to electromagnetic waves (WLAN, RFID, etc.) it is not reflected. Since there is no line of sight required between the sensor and signal source, it is - unlike optical systems - independent of weather conditions such as snow or fog. Therefore, the approach is suitable both for use in the garage at home as well as outdoors. The method works for each vehicle and moreover it is cost-effective because, unlike other solutions, only two very small, space-saving and low-cost magnetic field sensors are used. Whether the cars are being parked forwards or backwards and whether they stand side by side or one behind the other during refueling, it does not matter: all parking models are being supported by this method.

In the future the system will become even better: more projects at IVK aim at increasing the positioning range and at optimizing the signal processing.

<
Electric vehicle above the charging coil
University of Stuttgart / IVK
None 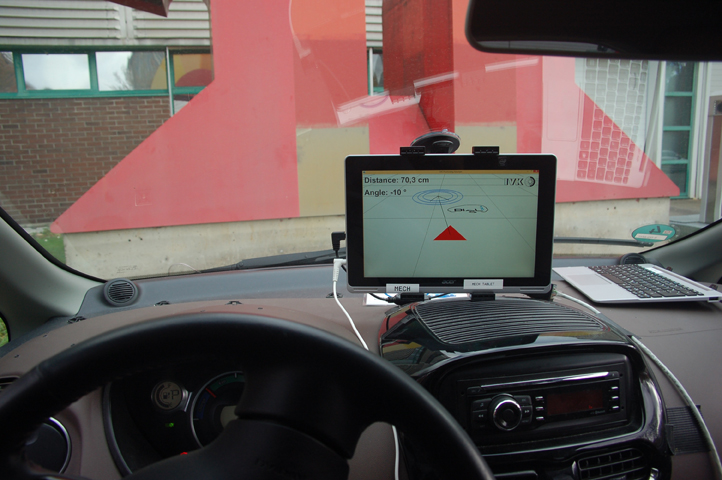 Electric vehicle above the charging coil 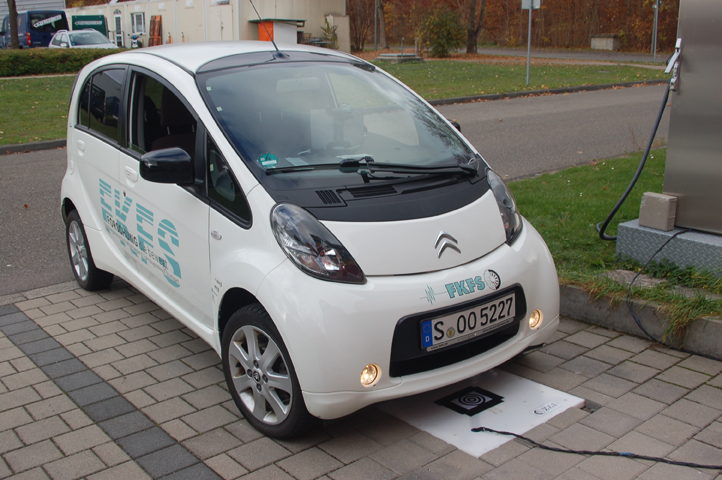