Scientists of the University Medical Center of the Johannes Gutenberg University Mainz and of the Max Planck Institute for Polymer Research (MPI-P) decipher stealth effect of nanocarriers evading clearance by the immune system.

By using drug delivery vehicles, so-called nanocarriers, pharmaceuticals reach the diseased area in the body. There they accelerate the healing process. But in order to prevent them from getting ingested by phagocytes, the surfaces of the nanocarriers are typically coated with the biocompatible synthetic polymer poly(ethylene glycol) (PEG). Scientists at the Mainz University Medical Center and the MPI-P have now identified that specific proteins need to adhere to the PEG and that the polymer recruits them from the blood. Based on this discovery, published in the February issue of Nature Nanotechnology, nanocarriers as drug delivery vehicles can be protected from the immune system’s macrophages more effectively. The researchers have also been able to apply their findings to other polymers, so-called polyphosphates. Contrary to PEG, these are fully biodegradable and therefore potential candidates for drug carriers in the long-term treatment of chronic diseases.

Polymers recruit specific proteins from the blood for the stealth effect
The ability of PEG to extend the blood circulation periods of nanocarriers and other substances is already known in medicine. However, it has been explained by the fact that PEG causes a reduced protein adsorption on nanocarrier surfaces. The work of Dr. Frederik Wurm and Prof. Dr. Katharina Landfester from the MPI-P as well as of Univ.-Prof. Dr. Volker Mailänder form the Mainz University Medical Center brings about a paradigm shift in this kind of surface modification: Together with their colleagues, the scientists have shown that it is not a reduced uptake of proteins, but rather a specific adsorption of certain proteins from the blood plasma which is responsible for the stealth effect. Consequently, it is not PEG, but the adsorption of, first and foremost, apolipoprotein J, also named clusterin, that cloaks the nanocarriers. Through the selective adsorption of clusterin the camouflaging of the nanocarriers is made possible so that they can reach their respective destinations in the body.
The physicians and life science researchers altered different nanocarriers and conducted comparative studies with adhering proteins. “Using high-resolution mass spectrometry, we were able to analyze precisely the complex mixture of the blood plasma, the proteins that adhere to the nanocarriers and their components,” Mailänder explains. “Thanks to these findings, we could also establish a new polymer class as an alternative to PEG: polyphosphate is degradable, while the currently used PEG may accumulate in the body and cause intolerances when taken over a period of several years,” Wurm points out. “This insight also provides the possibility to dispense with artificial materials completely using naturally occurring proteins for the stealth effect.” Landfester adds: “Mainz provides a unique location for such a research project as it combines polymeric synthesis, colloid chemistry and biomedicine providing an ideal starting point.” “Nanocarriers play an important role in the therapeutical treatment. The new findings of Dr. Mailänder and Dr. Wurm are milestones in this field”, says the Chief Scientific Officer of the Mainz University Medical Center.

Agents reach their destination efficiently
These results will significantly affect the development of new drugs and the treatment of diseased tissues, such as tumors. As an example, the total dose of a drug can be reduced while simultaneously prolonging its blood half-life. This is vital for therapies with rich side effects, as in the chemotherapeutic tumor therapy.

About the project:
The project is funded by the Collaborative Research Center SFB 1066 “Nanodimensional polymer therapeutics for tumor therapy” of the German Research Foundation (DFG) and by the Research Center for Immunotherapy (FZI) of the Johannes Gutenberg University Mainz as well as by the “BiomaTiCS – Biomaterials, Tissues and Cells in Science”.

<
Nanocarriers (yellow) are coated with a complex multitude of proteins before they interact with cell ...
© MPI-P
None

Nanocarriers (yellow) are coated with a complex multitude of proteins before they interact with cell membranes and are adhered. 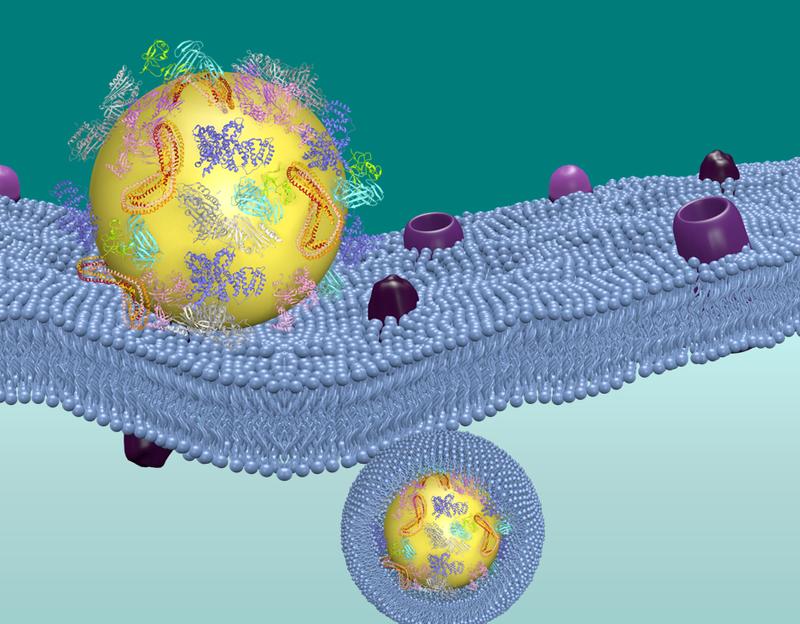