Extreme events in the brain

Physicists at the Universities of Bonn and Oldenburg have developed a model whose behavior – although based on strict rules – can apparently change spontaneously. There are also changes of this type in nature, for example, in the development of migraine attacks or epileptic seizures. The mechanism, described for the first time by the researchers, could help to better understand extreme events such as these. The work will be published soon in the professional journal "Physical Review X", and it is already available online.

Irregular fiery red rings move across the computer screen. They enlarge, merge together, dissipate, form offspring – a constant cycle of emergence and decay. But suddenly the screen grows dark; the rings have disappeared. For a few seconds, nothing happens. Then the dark surface begins to pulsate. It rhythmically changes its color, almost imperceptibly at first but this becomes clearer. Shortly thereafter there is a second change: The entire surface suddenly flashes red. Finally, the rings reappear; the extreme event is over.

Something similar may appear in the brain when a migraine attack begins or an epileptic seizure develops: Suddenly, billions of neurons simultaneously enter an exceptional state. The rules which they normally obey appear to be overridden all at once.

The software depicting its results on the computer screen in the office of the Department of Epileptology at the University of Bonn Hospital shows very similar behavior: Seemingly out of nowhere, at completely unpredictable intervals, the underlying model changes its dynamics. What is astonishing is that it actually obeys simple rules which nonetheless create a kind of randomness.

This model is a network of many thousands of individual elements, the nodes. These are interconnected – they can thus communicate with and influence each other. In this process, they interact not only with their neighbors but also with some remote nodes. Scientists refer to a "small-world" network. Nerve cells in the brain communicate with each other in a very similar way.

Although the rules of communication are precisely determined, networks of this type demonstrate a very complex behavior. On the one hand, this is due to the multitude of nodes, and on the other hand due to the wiring connecting these nodes. "We have now been able to show that the behavior of such networks can spontaneously change," explains Gerrit Ansmann, lead author of the work and doctoral candidate in the Neurophysics group. "However, these changes only occur under certain conditions," explains Prof. Dr. Klaus Lehnertz, head of the group. "We hope, with our model, to be able to better understand the conditions under which extreme events develop in the brain."

The switching between various patterns of activity including the generation and termination of extreme events is based on a fundamental mechanism, which can also be translated to other system, e.g. to patterns of excitation in the heart. “This generality allows for broad applications of our findings in other scientific fields”, underlines Prof. Dr. Ulrike Feudel, head of the group Theoretical Physics/Complex Systems at the Institute for Chemistry and Biology of the Marine Environment of the University of Oldenburg.

The work is part of a project funded by the Volkswagen foundation. In this project, the scientists investigate the mechanisms through which extreme events develop using the examples of epileptic seizures and toxic algal blooms. 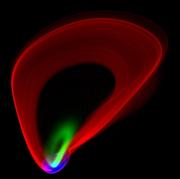 <
A so-called chaotic saddle which describes the behavior of the model developed in Bonn and Oldenburg ...
(c) Image: Neurophysics Group of the Department of Epileptology Bonn
None

A so-called chaotic saddle which describes the behavior of the model developed in Bonn and Oldenburg. It can be understood as a type of curved horse saddle on which a ball is rolling along. 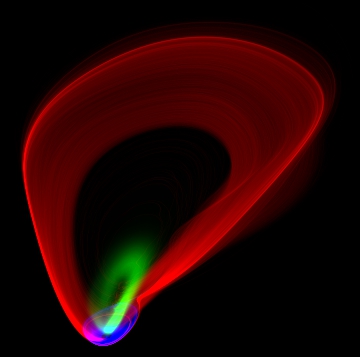