1.5°C vs 2°C global warming: new study shows why half a degree matters

European researchers have found substantially different climate change impacts for a global warming of 1.5°C and 2°C by 2100, the two temperature limits included in the Paris climate agreement. The additional 0.5°C would mean a 10-cm-higher global sea-level rise by 2100, longer heat waves, and would result in virtually all tropical coral reefs being at risk. The research is published today (21 April) in Earth System Dynamics, an open access journal of the European Geosciences Union, and is presented at the EGU General Assembly.

“We found significant differences for all the impacts we considered,” says the study’s lead author Carl Schleussner, a scientific advisor at Climate Analytics in Germany. “We analysed the climate models used in the [Intergovernmental Panel on Climate Change (IPCC)] Fifth Assessment Report, focusing on the projected impacts at 1.5°C and 2°C warming at the regional level. We considered 11 different indicators including extreme weather events, water availability, crop yields, coral reef degradation and sea-level rise.”

The team, with researchers from Germany, Switzerland, Austria and the Netherlands, identified a number of hotspots around the globe where projected climate impacts at 2°C are significantly more severe than at 1.5°C. One of these is the Mediterranean region, which is already suffering from climate change-induced drying. With a global temperature increase of 1.5°C, the availability of fresh water in the region would be about 10% lower than in the late 20th century. In a 2°C world, the researchers project this reduction to double to about 20%.

In tropical regions, the half-a-degree difference in global temperature could have detrimental consequences for crop yields, particularly in Central America and West Africa. On average, local tropical maize and wheat yields would reduce twice as much at 2°C compared to a 1.5°C temperature increase.

Tropical regions would bear the brunt of the impacts of an additional 0.5°C of global warming by the end of the century, with warm spells lasting up to 50% longer in a 2°C world than at 1.5°C. “For heat-related extremes, the additional 0.5°C increase marks the difference between events at the upper limit of present-day natural variability and a new climate regime, particularly in tropical regions,” explains Schleussner.

The additional warming would also affect tropical coral reefs. Limiting warming to 1.5°C would provide a window of opportunity for some tropical coral reefs to adapt to climate change. In contrast, a 2°C temperature increase by 2100 would put virtually all of these ecosystems at risk of severe degradation due to coral bleaching.

On a global scale, the researchers anticipate sea level to rise about 50 cm by 2100 in a 2°C warmer world, 10 cm more than for 1.5°C warming. “Sea level rise will slow down during the 21st century only under a 1.5°C scenario,” explains Schleussner.

Co-author Jacob Schewe, of the Potsdam Institute for Climate Impact Research in Germany, says: “Some researchers have argued that there is little difference in climate change impacts between 1.5°C and 2°C. Indeed, it is necessary to account for natural variability, model uncertainties, and other factors that can obscure the picture. We did that in our study, and by focusing on key indicators at the regional level, we clearly show that there are significant differences in impacts between 1.5°C and 2°C.”

William Hare, a senior scientist and CEO at Climate Analytics who also took part in the Earth System Dynamics research, adds: “Our study shows that tropical regions – mostly developing countries that are already highly vulnerable to climate change – face the biggest rise in impacts between 1.5°C and 2°C.”

“Our results add to a growing body of evidence showing that climate risks occur at lower levels than previously thought. It provides scientific evidence to support the call by vulnerable countries, such as the Least Developed Countries and Small Island Developing States, that a 1.5°C warming limit would substantially reduce the impacts of climate change,” says Hare.

Please mention the name of the publication (Earth System Dynamics) if reporting on this story and, if reporting online, include a link to the paper (TBA) or to the journal website (http://www.earth-system-dynamics.net/).

See HTML version of this release, including accompanying images and the scientific study, at: http://www.egu.eu/news/230/15c-vs-2c-global-warming-new-study-shows-why-half-a-d....

This research is presented in the paper ‘Differential climate impacts for policy-relevant limits to global warming: the case of 1.5 °C and 2 °C’ to appear in the EGU open access journal Earth System Dynamics on 21 April 2016. On the same day, the results will also be presented at the EGU General Assembly in Vienna.

The scientific article is available online, free of charge, from the publication date onwards, at http://www.earth-syst-dynam-discuss.net/esd-2015-68/ (this URL currently links to the non-peer-reviewed version of the paper, but will redirect to the page of the final, peer-reviewed paper after it is published). A pre-print version of the final paper is available for download at http://www.egu.eu/news/230/15c-vs-2c-global-warming-new-study-shows-why-half-a-d....

The European Geosciences Union (EGU) is Europe’s premier geosciences union, dedicated to the pursuit of excellence in the Earth, planetary, and space sciences for the benefit of humanity, worldwide. It is a non-profit interdisciplinary learned association of scientists founded in 2002. The EGU has a current portfolio of 17 diverse scientific journals, which use an innovative open access format, and organises a number of topical meetings, and education and outreach activities. Its annual General Assembly is the largest and most prominent European geosciences event, attracting over 11,000 scientists from all over the world. The meeting’s sessions cover a wide range of topics, including volcanology, planetary exploration, the Earth’s internal structure and atmosphere, climate, energy, and resources. The EGU 2016 General Assembly is taking place in Vienna, Austria, from 17 to 22 April 2016. For information about meeting and press registration, please check http://media.egu.eu or follow the EGU on Twitter and Facebook.

If you wish to receive our press releases via email, please use the Press Release Subscription Form at http://www.egu.eu/news/subscribe/. Subscribed journalists and other members of the media receive EGU press releases under embargo (if applicable) 24 hours in advance of public dissemination.

Earth System Dynamics (ESD) is an international scientific journal dedicated to the publication and public discussion of studies that take an interdisciplinary perspective of the functioning of the whole Earth system and global change. The overall behaviour of the Earth system is strongly shaped by the interactions among its various component systems, such as the atmosphere, cryosphere, hydrosphere, oceans, pedosphere, lithosphere, and the inner Earth, but also by life and human activity. ESD solicits contributions that investigate these various interactions and the underlying mechanisms, ways how these can be conceptualized, modelled, and quantified, predictions of the overall system behaviour to global changes, and the impacts for its habitability, humanity, and future Earth system management by human decision making.

<
Evidence of coral bleaching around Tioman Island, Malaysia. This image is licensed under a Creative ...
Paul via Flickr
None

<
Evidence of coral bleaching around Tioman Island, Malaysia. This image is licensed under a Creative ...
Paul via Flickr
None

Evidence of coral bleaching around Tioman Island, Malaysia. This image is licensed under a Creative Commons Attribution-ShareAlike licence. 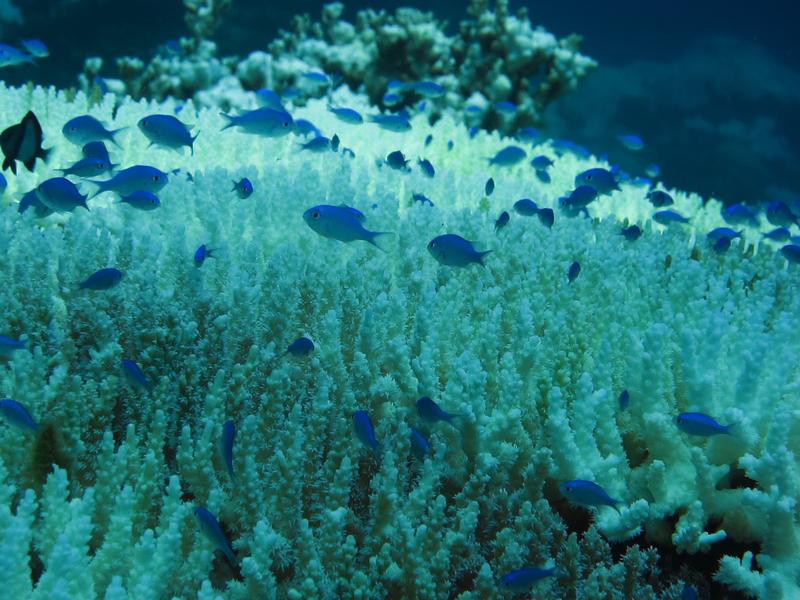