Electric field shakes a magnet in one trillionth of a sec. Novel method of spin control discovered
Erweiterte Suche ?

Home > Pressemitteilung: Electric field shakes a magnet in one ...

Electric field shakes a magnet in one trillionth of a sec. Novel method of spin control discovered

An international team of scientists from Germany, the Netherlands and Russia has successfully demonstrated a novel, highly efficient and ultrafast magnetization control scheme by employing electromagnetic waves oscillating at terahertz frequencies. The new concept will be published in the upcoming issue of Nature Photonics.

Although magnetism has been known from ancient times, a fundamental understanding of the origin of this physical phenomenon has been achieved only in the last 100 years. Today, the simplest model of a magnet is based on electrons orbiting the atomic nuclei as the planets revolve around the sun. Moreover, like the planets gyrate around their rotational axes, the electrons exhibit a similar spinning. Due to this spinning motion, an electron behaves as an elementary magnet, where the “spin” can be imagined as the quantum part of a compass needle. In many materials, the spins point in certain directions determined by the quantum mechanical properties of the orbital motion of the electrons. This direction is called the magnetic anisotropy axis.
The synergy of very many “needles” in a magnet can form magnetically polarized states like those used to store information in common hard drives. Opposite polarities of the needles (comparable to “north” and “south” of a real compass) correspond to the “0” and “1” states of a bit of information. In state-of-the-art magnetic recording technology, these bits are altered between “0” and “1” with the help of an external magnetic field strong enough to overcome the magnetic anisotropy axis. The switching mechanism employed is physically restricted to a certain speed, so such technology is quickly reaching its fundamental limits. However, the rapidly increasing amount of information being recorded and archived calls for ever-faster magnetic recording. To meet this challenge, an international team of scientists from Regensburg, Nijmegen, Moscow, and Berlin has investigated a conceptually new way to control magnetism in an extremely rapid fashion by way of oscillating electric fields.
The researchers used the Regensburg high-field terahertz radiation source to generate strong pulses of electromagnetic radiation with duration on the order of one picosecond (1 picosecond = 10-12 s, the trillionth of a second). The centre frequency of the electromagnetic wave pulses is one terahertz (1 THz = 1012 Hz), i.e. between microwaves and visible light. The terahertz electric field is strong enough to induce a voltage of a million volts over a distance of one centimeter. It thereby perturbs the orbital motion of the electrons and deflects the direction of the magnetic anisotropy axis. The spins have to follow their new equilibrium axis and start to oscillate.
Previously, researchers successfully used pulses of visible light or THz magnetic fields to deflect spins, but the interactions they employed were comparably weak. In contrast, in the present experiment, the amplitude of the magnetization oscillations scales quadratically with the driving THz electric field. Due to this nonlinear scaling, comparably weak THz fields (likely about one tenth of the ones expected for existing methods) should be sufficient to induce such strong oscillations in the spins that they change their directions. This process would correspond to writing a bit of information into a magnetic storage device. Therefore, this new finding addresses the long-term technological ambition of a direct, high-speed manipulation of magnetic data bits by an electric field pulse. Additionally, for the first time, a nonlinear interaction mechanism between spins and short THz pulses has been exploited, marking a milestone of photonics on its own. These findings are of great importance for the understanding of light-magnetism interactions on extremely short timescales and for information technology of the future.

<
An intense THz pulse (red waveform) changes the electronic orbitals of a magnetic material leading t ...
Dr. Rostislav Mikhaylovskiy – Only to be used in connection with coverage about this press release. 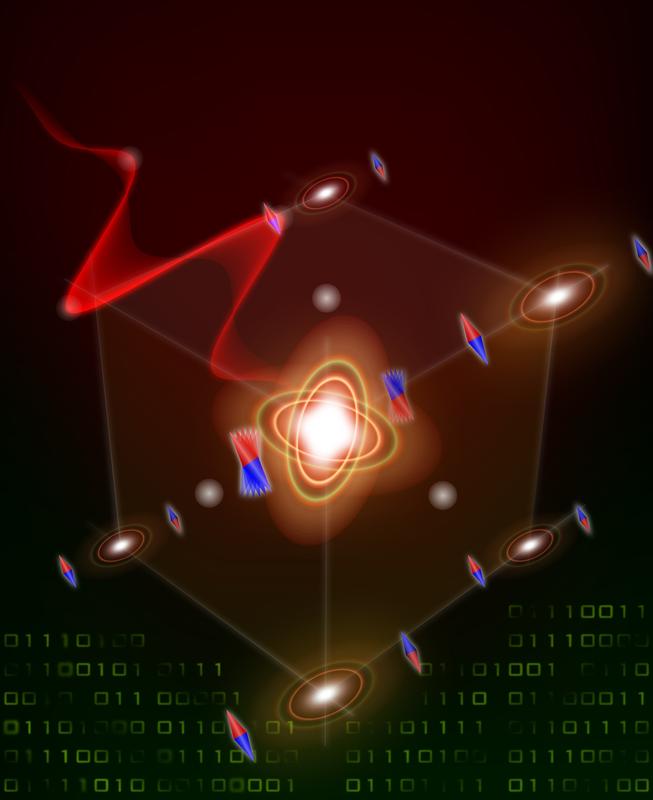