Nerve cells identified which regulate the anxiety response to stress

When we encounter stressful situations the brain sets off a chain reaction, which fires up everything from our hearts to our anxiety and fear. This is our body’s way of getting ready to deal with the stressful situation – regardless of whether it is an enemy attack or an exam. But what controls the anxiety component of this response? New research at the Max Planck Institute of Psychiatry has pinpointed certain nerve cells in a brain region called the extended amygdala as regulating our fear and anxiety responses. Their findings were published recently in Molecular Psychiatry.

For most people, the fear and anxiety response quickly gets turned back down once the threat has past. However in others, the anxiety remains, and the condition can become chronic, leading to anxiety disorders, depression or post-traumatic stress disorder (PTSD). Medications can help, but they are often only partially effective, at best.

Prof. Alon Chen and postdoctoral fellow Dr. Marloes Henckens, narrowed their search for the responsible nerve cells to the extended amygdala – a brain region known to be accountable for emotions such as fear and anxiety and to be involved in the stress response. Some of its cells express receptors for a protein that is released in stressful situations.

“We knew that this specific brain region is involved in regulating the response to stressful challenges” says Chen. “So we decided to experiment with a technique that can turn nerve cells ‘on’ and ‘off’ in order to find out if and how these cells affect the anxiety response.” This technique, called optogenetics, uses light to control neuron activity. Lab mice were genetically engineered to express a light-sensitive protein in specific nerve cells in the extended amygdala. Then, tiny optic fibers were used to beam blue or yellow light onto these cells in order to switch them on or off.

Comparing mice that had these cells turned either on or off, the scientists found that mice with the neurons switched on showed less anxiety than those in which the same neurons had been switched off.

To further examine the downstream effects of these neurons, the researchers measured levels of cortisol – a stress hormone that directs many of the body’s systems to properly respond to stressful stimuli. They compared the mice that had their extended amygdala neurons switched on with the control group. The mice with switched on neurons had lower overall cortisol levels, and it took less time for their cortisol levels to return to normal after a stress-inducing event. These experiments enabled the scientists, for the first time, to identify the exact location and function of the neurons within the extended amygdala that regulate the anxiety response to stress.

If these neurons regulate the anxiety response, it stands to reason that they might also be involved in PTSD. To unravel the connection, the researchers first exposed the mice to a traumatic event. The mice were next transferred to a new environment and then given a reminder of the traumatic event. This generates symptoms of PTSD in some mice as well as humans. Right after the reminder, some of the mice had the newly-discovered nerve cells switched on through the optogenetic fibers. A week later, all of the mice were tested for signs of PTSD. In the control group, in which the cells had been left alone, some 42% of the mice had developed PTSD-like symptoms. Whereas only 8% of those who had these cells “switched on” showed signs of the disorder.

“’Switching on these particular neurons improved the mice’s ability to recover from the traumatic experience, and thus cope with the symptoms of PTSD,” says Chen. “Locating the exact neurons and receptors involved could be pivotal. The better we understand the brain’s mechanism for regulating the response to stress, the better we will be able to develop drugs that are specifically targeted, and hopefully more effective, for treating anxiety-related disorders.”

<
The experiments showed the different level of anxiety of mice in stressful situations.
Tali Wiesel, Weizmann Institute of Science
None

The experiments showed the different level of anxiety of mice in stressful situations. 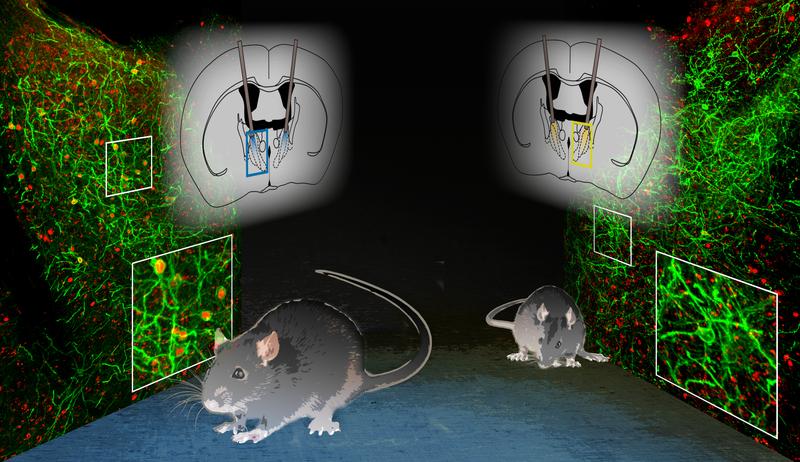