ETH Researchers have used the simplest approach yet to produce artificial beta cells from human kidney cells. Like their natural model, the artificial cells act as both sugar sensors and insulin producers.

Researchers led by ETH Professor Martin Fussenegger at the Department of Biosystems Science and Engineering (D-BSSE) in Basel have produced artificial beta cells using a straightforward engineering approach. The artificial beta cells can do everything that natural ones do: they measure the glucose concentration in the blood and produce enough insulin to effectively lower the blood sugar level. The ETH researchers presented their development in the latest edition of the journal Science.

Previous approaches were based on stem cells, which the scientists allowed to mature into beta cells either by adding growth factors or by incorporating complex genetic networks.

For their new approach, the ETH researchers used a cell line based on human kidney cells, HEK cells. The researchers used the natural glucose transport proteins and potassium channels in the membrane of the HEK cells. They enhanced these with a voltage-dependent calcium channel and a gene for the production of insulin and GLP-1, a hormone involved in the regulation of the blood sugar level.

In the artificial beta cells, the HEK cells’ natural glucose transport protein carries glucose from the bloodstream into the cell’s interior. When the blood sugar level exceeds a certain threshold, the potassium channels close. This flips the voltage distribution at the membrane, causing the calcium channels to open. As calcium flows in, it triggers the HEK cells’ built-in signalling cascade, leading to the production and secretion of insulin or GLP-1.
The initial tests of the artificial beta cells in diabetic mice revealed the cells to be extremely effective: “They worked better and for longer than any solution achieved anywhere in the world so far,” says Fussenegger. When implanted into diabetic mice, the modified HEK cells worked reliably for three weeks, producing sufficient quantities of the messengers that regulate blood sugar level.

In developing the artificial cells, the researchers had the help of a computer model created by researchers working under Jörg Stelling, another professor in ETH Zurich’s Department of Biosystems Science and Engineering (D-BSSE). The model allows predictions to be made of cell behaviour, which can be verified experimentally. “The data from the experiments and the values calculated using the models were almost identical,” says Fussenegger.

He and his group have been working on biotechnology-based solutions for diabetes therapy for a long time. Several months ago, they unveiled beta cells that had been grown from stem cells from a person’s fatty tissue. This technique is expensive, however, since the beta cells have to be produced individually for each patient. The new solution would be cheaper, as the system is suitable for all diabetics.

Market-readiness is a long way off

It remains uncertain, though, when these artificial beta cells will reach the market. They first have to undergo various clinical trials before they can be used in humans. Trials of this kind are expensive and often last several years. “If our cells clear all the hurdles, they could reach the market in 10 years,” the ETH professor estimates.

Diabetes is becoming the modern-day scourge of humanity. The International Diabetes Federation estimates that more than 640 million people worldwide will suffer from diabetes by 2040. Half a million people are affected in Switzerland today, with 40,000 of them suffering from type 1 diabetes, the form in which the body’s immune system completely destroys the insulin-producing beta cells.

<
Diagram of a HEK-beta cell
Graphics: ETH Zurich
None

<
Diagram of a HEK-beta cell
Graphics: ETH Zurich
None

Diagram of a HEK-beta cell 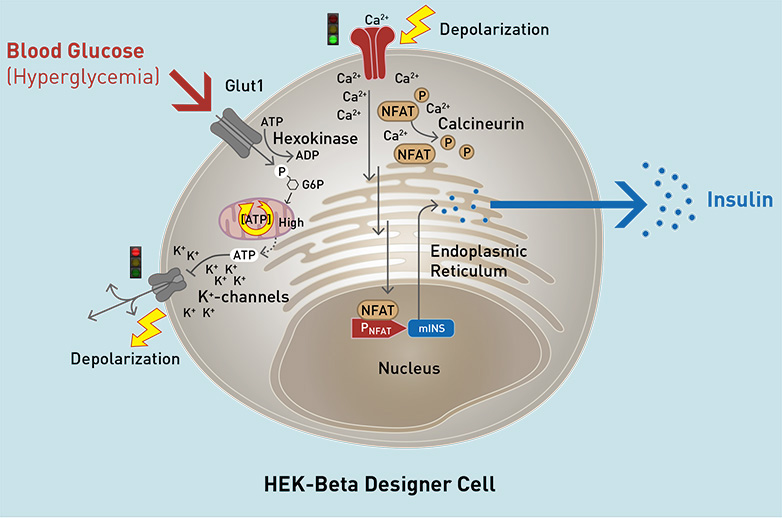