Wolffia globosa, a tiny, rootless duckweed, or water lens, apparently has what it takes to achieve great things.

Researchers at the University of Jena (Germany), together with colleagues in India and Germany, have investigated the potential of various duckweeds as a human food source. The results, which are very promising, have been published under the title ‘Nutritional value of duckweeds (Lemnaceae) as human food’ in the leading journal ‘Food Chemistry’.

“Duckweeds can definitely serve as a source of protein in human nutrition,” says Prof. Gerhard Jahreis of the Friedrich Schiller University Jena. It is not without reason that duckweeds are dubbed ‘green machines’, the nutritional scientist adds. Jahreis explains that the protein content of duckweeds is comparable to that of lupins, rape or peas, with a protein yield of 30 per cent of dry weight. What is more, these tiny plants contain valuable omega-3 fatty acids such as stearidonic acid and alpha-linolenic acid. Possible uses for duckweeds would be in the ever-popular smoothies or gluten-free baked goods.

“Duckweeds multiply very rapidly, but do not require any additional cultivable land,” says Dr Klaus Appenroth, associate professor at Friedrich Schiller University Jena. In view of the decrease in areas of farmland, this gives duckweed a huge advantage over soya, for example. For thousands of years, duckweed species have been on the menu in Asian countries such as Thailand, Cambodia and Laos. As a plant physiologist, Appenroth has dedicated nearly his entire research career at the University Jena to the tiny plants, and he has built up an extensive collection of Lemnaceae (commonly known as duckweeds or water lenses), among other things. He singles out in particular the species Wolffia globosa, which is served up in Asia in the form of soup, as a vegetable or in omelette. In the latest tests by the research group, Wolffia globosa showed itself to be the most promising.

As yet these duckweeds have not been cultivated, but simply ‘harvested’ from bodies of water. However, there are some initial experimental facilities in Israel and the Netherlands, where duckweeds are produced on an industrial scale. Wolffia globosa measure only 0.7 to 1.5 mm, are oval in shape and rootless. They multiply so rapidly that in a short time they can cover the entire surface of a body of water. A further argument in favour of having these plants as part of the human diet is that duckweeds easily absorb trace elements that are dissolved in water. This means that with little expense and effort, they can be used to relieve deficiency symptoms due to malnutrition.

Other potential applications for duckweeds are fish farming and water purification. The minute plants could also be used for producing bio-ethanol.

<
Duckweed has a huge potential as a human food source.
Photo: Jan-Peter Kasper/FSU Jena
None

<
Klaus Appenroth (r.) and Gerhard Jahreis in a laboratory of the University Jena with a great collect ...
Photo: Jan-Peter Kasper/FSU Jena
None

Duckweed has a huge potential as a human food source. 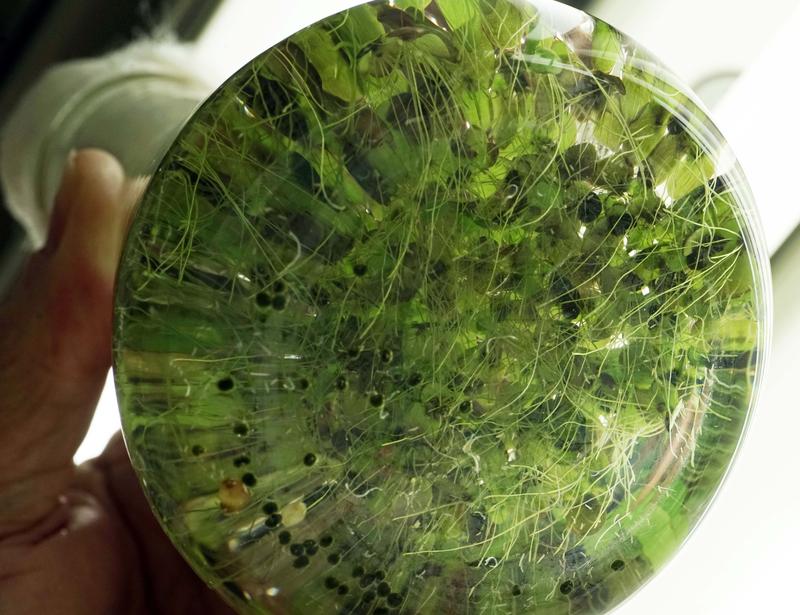 Klaus Appenroth (r.) and Gerhard Jahreis in a laboratory of the University Jena with a great collection of duckweed. 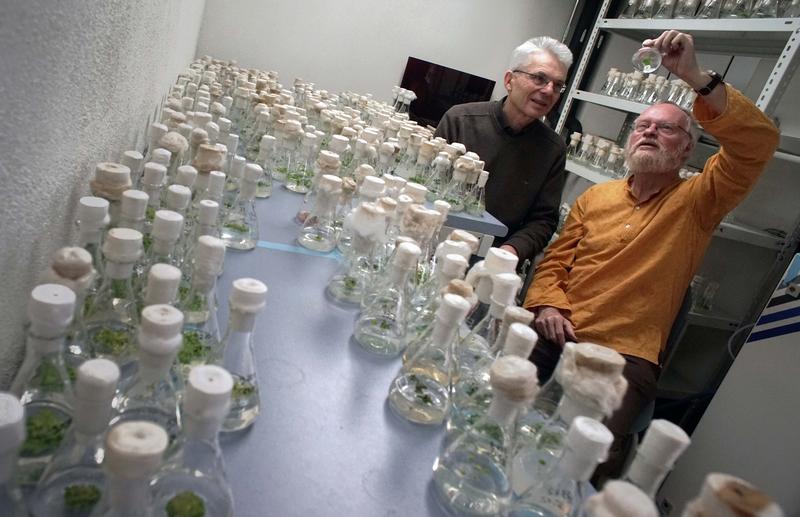