Symptoms of tremors and shaking in newborn piglets are not a sign that the animals are cold, but rather that they are suffering from a specific viral infection. Researchers at Vetmeduni Vienna have now been able to prove this correlation for the first time using a newly developed test. The scientists detected a previously unknown virus, termed atypical porcine pestivirus (APPV), in “shaking piglets”, making it possible to clearly diagnose the potentially fatal disease. The virus remains in the animals for a long time following an infection and may also be transmitted sexually. The findings were published in the journal Veterinary Research.

Cases of newborn “shaking piglets” have been reported since the 1920s both in Europe and abroad. Yet an additional cause for these congenital tremors has so far eluded researchers. A previously unknown virus had therefore been suspected for quite some time – but without conclusive confirmation.
On the basis of new genomic sequence data, a team of researchers from the University Clinic for Swine, the Institute of Virology, and the Institute of Pathology and Forensic Veterinary Medicine at Vetmeduni Vienna has now been able to identify a new virus as the cause of this potentially life-threatening disease. The pathogen, which belongs to the so-called atypical porcine pestiviruses (APPV), was detected in diseased animals at Austrian farms using a specially developed test.

Congenital tremors may be life-threatening

“Depending on the severity of the shaking, congenital tremor presents a challenge for the piglets from the first minute of their life,” says first author Lukas Schwarz, veterinary clinician at the University Clinic for Swine. The tremor can sometimes be so severe that the piglet is unable to properly suckle milk. Yet suckling is especially important for piglets in the first 24 hours after birth. Only mother’s milk contains everything the animals need to survive. “Without the first drink of mother’s milk, piglets have a very low chance of survival,” Schwarz explains.
In piglets which survive this first phase, symptoms usually subside after three or four weeks. In rare cases, a slight tremor remains in the ears. But getting this far requires an enormous amount of attention and care on the part of the pig farmers and veterinarians. This makes it even more surprising that researchers have so far failed to identify a cause for this mysterious disease. A mortality rate of up to 30 percent is possible among affected piglets; the detection of the APPV virus therefore represents a diagnostic breakthrough.

The pestiviruses had been considered a possible causative agent, along with other viral pathogens, but the established tests had so far remained without success. “It was the characterization of the atypical pestiviruses that first brought us on the right track,” says virologist Benjamin Lamp. On the basis of the sequence data, it was possible to identify a further strain of these viruses and so develop a new test. Detection is now possible using the usual molecular methods such as polymerase chain reaction.
The detection procedure not only confirmed the presence of the virus in high numbers in the diseased piglets; the team was also able to detect the pathogen in the saliva and semen of mature pigs.

“The presence of the virus in the semen of a mature boar sheds new light on how the pathogen may be spread,” says Schwarz. “The virus appears to persist in some animals even without symptoms. We detected the pathogen in the semen of a former shaking piglet, which shows that the disease may be transmitted sexually.”
The virus is likely transmitted to the piglet at a stage of gestation when the central nervous system is developing, as indicated by changes in nerve fibres. Antibodies against the virus have been detected in sows, yet the uterine anatomy is such that it prevents transmission to the foetus. An infection among older animals is most likely asymptomatic.

Interdisciplinary cooperation led to the findings

Schwarz credits the research findings to the efficient cooperation among the campus partners and swine practitioners. “Although this disease has been present in Austria for some time, it was the intense cooperation with the university’s other institutes that allowed us to achieve a clear result so quickly. This not only enables us to make a clear diagnosis, but can also be helpful in developing a vaccine.” Lamp sees more work to be one in the characterization and classification of the pestiviruses: “The discovered virus is only 90 percent identical to the new sequences of atypical pestiviruses. We should therefore reconsider the classification of this virus species.”

<
Suckling piglets can suffer a congenital tremor, which is caused by a so for un-detectable virus, th ...
Michael Bernkopf/Vetmeduni Vienna
None

Suckling piglets can suffer a congenital tremor, which is caused by a so for un-detectable virus, the atypical porcine Pestivirus. 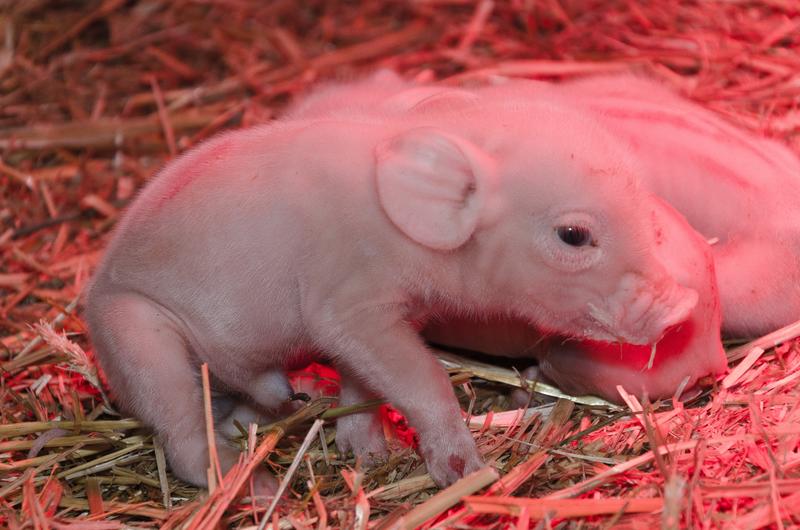