Home > Pressemitteilung: “Bring it back”, but within bounds – ...

“Bring it back”, but within bounds – retrieval strains the forelimbs of dogs

Hunting dogs such as the popular breed retriever are ideally suited for retrieving birds or small game. However, the weight the dogs carry strains their locomotor system. A motion study by experts from the University of Veterinary Medicine, Vienna showed that the dogs tilt forwards like a seesaw when they carry the prey in their mouths. This can make already existing joint and tendon damage worse. Therefore, adjusted weights should be used for the training of puppies and adult dogs. Furthermore, the joints should be checked regularly by specialists. The study was published in the journal BMC Veterinary Research.

Originally, retrievers were not bred as family dogs but as dogs for work and hunt. They are so-called gun dogs which can be used to retrieve birds and small game such as rabbits. This ability is meanwhile also used in competitions in which the dogs only retrieve the dummies they are trained with from their puppy age. The same artificial weights are also used for hunting training.
An adult animal can carry loads of several kilos in its mouth. “But even if gun dogs have the required attributes, the additional weight is physically burdensome for them,” said Barbara Bockstahler from the Clinical Unit of Small Animal Surgery at the Vetmeduni Vienna. Particularly the joints and tendons of the locomotor system are strained when dogs retrieve objects – as if we ran while carrying a load. But it has been unclear so far if the weight of this load is spread on all parts of the locomotor system or if it causes a one-sided strain.

Movement analysis lab for dogs to give indication

The effects on the locomotor system have been analysed in a special movement lab with ten trained dogs. The researchers walked the dogs over a so-called pressure plate with or without loads in their mouths. “By using a pressure plate, we can measure the bottom-up ground reaction force,” explained Bockstahler. This force is exerted back by the ground and equivalent to the force exerted when the weight hits the ground.
When measuring the ground reaction force without an additional load, 60 percent of the dog’s weight are on the forelimbs and 40 percent on the hindlimbs. If one area carries more weight, the difference can be measured. Another parameter is the pressure distribution under the paws. “This is comparable to a human holding a weight in his hand, who slightly tilts backwards and therefore shifts his body weight to his heels,” explained Bockstahler.

The scientists found out that the load in the dog’s mouth causes the forces to increase, but particularly affects the forelimbs. In any case and with rising weight, the dogs became lighter on their hindlimbs. Carrying the prey had an effect similar to a seesaw. To illustrate this effect: If two children of the same weight are sitting opposite each other on a seesaw, it remains balanced. If an adult is sitting on one side, the seesaw tilts to this side and the child is permanently raised.
In the movement lab, however, this load test can only be carried out for walking dogs, not for running or jumping ones. Especially during the hunt, but also in competitions, retrievers move at higher speed. “Of course we cannot completely imitate such sequences of movements in the lab,” explained Bockstahler. But the experts were able to make a projection based on the measured data about how the affecting forces will chance or increase when the dogs run or jump and, thus, effect the joints. Such a movement and gait analysis is also applied in human physiotherapy in order to identify
deviations from normal gait patterns.

In principle, retrievers are perfectly suited for carrying loads due to their physical capacities. Therefore, a healthy dog can withstand an adjusted load. When training dogs, that are still growing, trainers have to be careful to avoid consequential damage. If retrievers are trained for hunt or competitions, they should see a specialist regularly to check joints, tendons and muscles. This is particularly important for young dogs: regular checks can avoid damage. “In general, training with loads – within bounds – and using dogs as gun dogs is completely okay,” said Bockstahler.

<
Training of hunting dogs like the retriever should be done with adjusted weights to avoid damage of ...
Elli Winter/moorhunde.de
None

Training of hunting dogs like the retriever should be done with adjusted weights to avoid damage of joints or tendons. 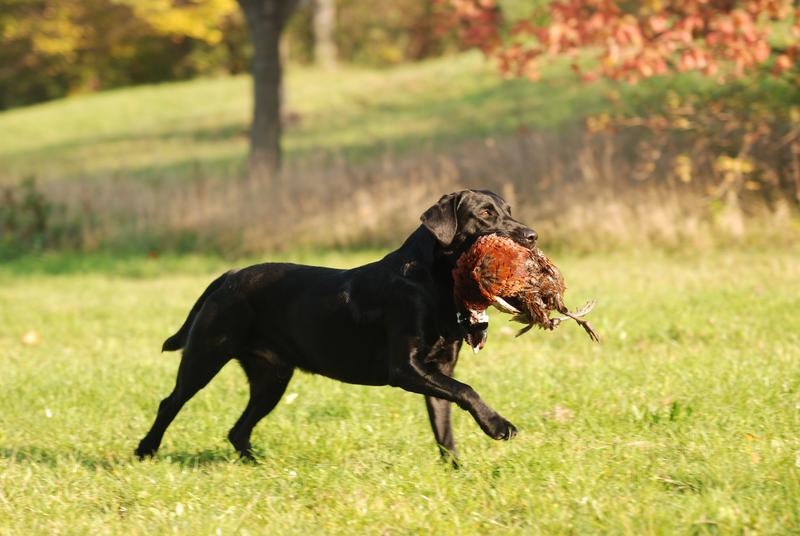