The crystal harmony of light

Light is made of an oscillating electric and magnetic field. In order to tune its properties, one would ultimately like to shape these fields directly – a specifically daunting challenge when the oscillation frequency is high. A team of physicists from Regensburg (Germany), Marburg (Germany), and Ann Arbor (USA) has now realized a way to directly tailor lightwaves emitted by accelerated electrons inside a solid, with the aid of the crystal’s symmetry. The results of this breakthrough will be reported in the upcoming issue of Nature Photonics.
For several years, physicists have been able to routinely produce extremely short flashes of light in the hard ultraviolet or even soft x-ray spectral region. For this purpose, a method called high-harmonic generation is employed, where a strong near-infrared laser rips electrons from an atomic gas and slams them back into the nuclei to emit ultraviolet radiation upon recollision. This event happens on such a short timescale that the light emerges in very short bursts, so-called attosecond pulses (1 attosecond = 10-18 seconds). There are even more attoseconds in one second than seconds have passed since the beginning of our universe. This unbelievably short instant of time, however, is the natural scale on which electronic processes in atoms, molecules, and solids unfold.
To observe such processes scientists have employed attosecond flashes that record ultrafast snapshots. Following the principle of a stroboscopic camera and stitching a sequence of snapshots together, an extreme slow motion movie emerges. As researchers try to take ever shorter snapshots to resolve the high-speed dynamics of electrons, it becomes increasingly important to fully control the flashes of light that are either used to freeze the motion in time or to drive such ultrafast processes. Ideally physicists would like to tailor the underlying electromagnetic wave itself rather than only the brightness or the duration of the light burst. Now a team of physicists from Regensburg, Marburg and Ann Arbor has demonstrated exactly this by high-harmonic generation in a solid state crystal. Exploiting the symmetry of the crystal, ultrashort waveforms can be tailored with a level of precision that is not available in atomic gases.
The experiments were conducted at the Regensburg terahertz high-field source, where high-harmonics are produced from a bulk semiconductor. For the first time, the physicists could resolve details of the carrier wave of the high-harmonics. More importantly, they showed that the crystal orientation influences the light emission in an intriguing way: for certain directions every second high-harmonic pulse has the opposite sign of its predecessor. The symmetry of the crystal can also be used to adjust for an arbitrary polarization angle of the high-harmonic lightwave. The experimental findings are explained by quantum mechanical simulations performed by physicists from Marburg and Ann Arbor. A particular interference mechanism of the excited and accelerated electrons inside the crystal is responsible for the observed behaviour.
This pioneering work leads the way towards solid-based attosecond sources that provide custom-tailored and adjustable lightwaves for the investigation and the control of ultrafast processes. As a particularly fascinating perspective, these optical waveforms may be used as supershort bias fields to drive electric currents at unprecedented clock rates. Such concepts known as lightwave electronics are now coming into closer reach.
Original publication: F. Langer, M. Hohenleutner, U. Huttner, S. W. Koch, M. Kira, and R. Huber, “Symmetry-controlled temporal structure of high-harmonic carrier fields from a bulk crystal”. Nature Photonics (2017).
Publication: DOI 10.1038/nphoton.2017.29
Contact:
Prof. Dr. Rupert Huber
Universität Regensburg
Lehrstuhl für Experimentelle und Angewandte Physik
Telefon: 0049 0941 943-2070
E-Mail: Rupert.Huber@ur.de

<
Polarization-shaped high-harmonics (bright waveform) emerge from the inside of a bulk crystal (latti ...
Fabian Langer, University of Regensburg – only to be used for this press release.
None

Polarization-shaped high-harmonics (bright waveform) emerge from the inside of a bulk crystal (lattice). 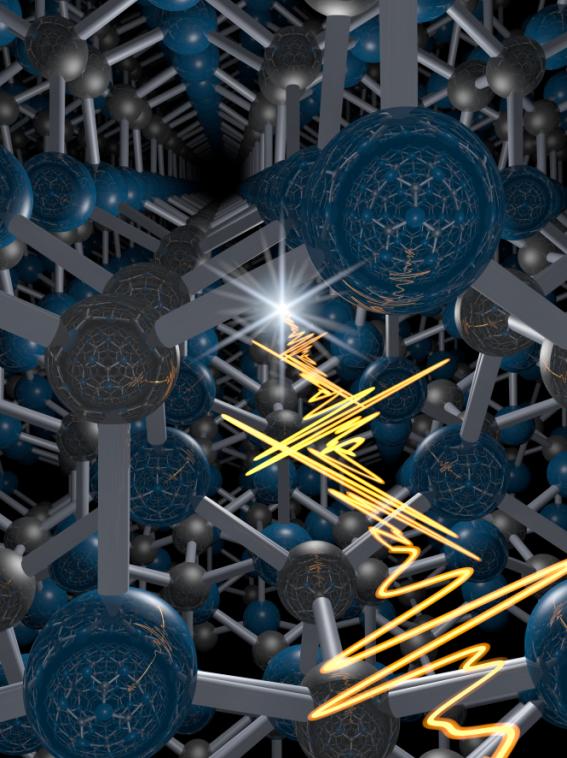