Scientists from the Excellence Cluster Universe at the Ludwig-Maximilians-Universität Munich have establised "Cosmowebportal", a unique data centre for cosmological simulations located at the Leibniz Supercomputing Centre (LRZ) of the Bavarian Academy of Sciences. The complete results of a series of large hydrodynamical cosmological simulations are available, with data volumes typically exceeding several hundred terabytes. Scientists worldwide can interactively explore these complex simulations via a web interface and directly access the results.

With current telescopes, scientists can observe our Universe’s galaxies and galaxy clusters and their distribution along an invisible cosmic web. From the exact measurement of the cosmic microwave background (CMB) with the Planck space observatory and many other measurements for example with the Hubble space telescope, the scientists were able to develop a precise model of our Universe. However, little is yet known about how these structures could form from the distribution of matter in the early universe.

In order to answer this question, theoretical astrophysicists work with cosmological, hydrodynamical simulations. They test their hypotheses about the universe by developing mathematical models that describe the underlying complex physical processes and run them on high-performance computers trying to reproduce the evolution of the Universe over billions of years. If the underlying assumptions are correct, the simulations should match the current astronomical observations and findings.

A group of astrophysicists led by Dr. Klaus Dolag from the Excellence Cluster Universe at the Ludwig-Maximilians-Universität Munich in close collaboration with the LRZ have now initiated "Cosmowebportal". This unique data centre for cosmological simulations provides access to the results of the world's most extensive set of cosmological hydrodynamic simulations, Magneticum Pathfinder, also developed by Klaus Dolag’s team and carried out at the LRZ.

The complete simulations are saved at the LRZ in Garching on a data store for large datasets, which is connected to the supercomputer SuperMUC. Using a web interface, interested scientists can, for example, select objects from the raw simulation data, process it, and even create virtual observations mimicing existing or future space telescopes.

"Large astronomical projects such as the space telescopes Euclid or eRosita, which are to be launched in the next few years, will observe large areas of the Universe, as well as provide further insight into the evolution of the first structures of the Universe so that the significance of cosmological hydrodynamic simulations will even increase in future,” says Klaus Dolag. "A data centre that pools and makes these simulations available therefore is an important facility for scientists working in the field."

Besides Klaus Dolag and Antonio Ragagnin, scientists from the following institutions were involved in the project: C2PAP, the data center of the Excellence Cluster Universe, LRZ, University of Trieste, the INAF Osservatorio Astronomico di Trieste and the Max Planck Computing and Data Facility.

Caption: Visualizations of the simulated distributions of gas and stars in the Universe from data provided by Cosmowebportal: The cube represents a space section of the Universe (more than 300 million light years), the bright spots on the cube faces show galaxies and galaxy clusters along the cosmic web. The first two disks zoom into the central galaxy cluster, the third disk (far right) demonstrates how an observation of the zoom area would look with an X-ray telescope ("virtual telescope").

<
Visualizations of the simulated distributions of gas and stars in the Universe from data provided by ...
P. Baintner u. H. Brüchle, LRZ
None

<
Visualizations of the simulated distributions of gas and stars in the Universe from data provided by ...
P. Baintner u. H. Brüchle, LRZ
None 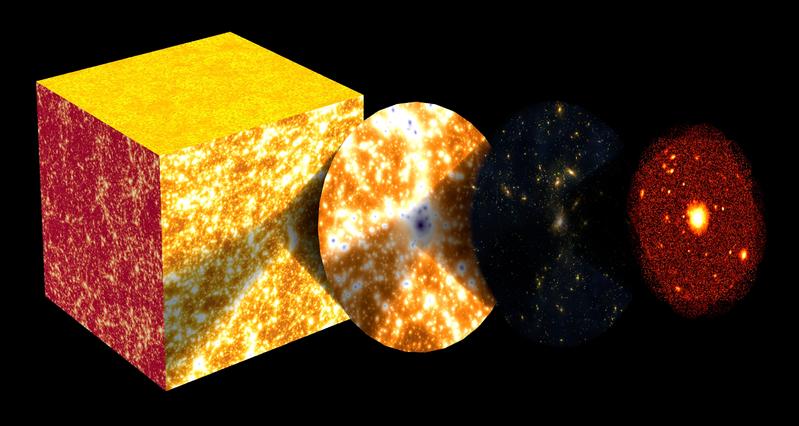 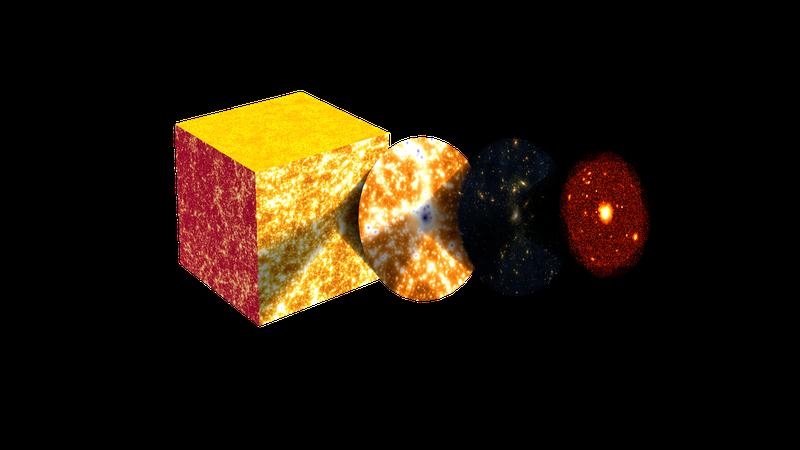